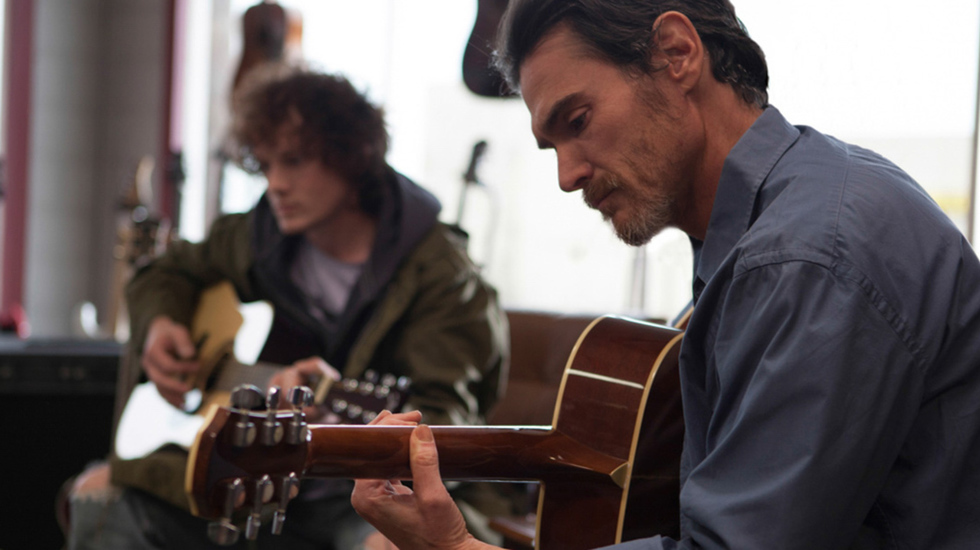 This Week's Trailer: A peek at Rudderless, the directorial debut from William H. Macy that stars Billy Crudup as Sam Manning, an ad exec who deals with his son Josh's death by publicly performing the kid's original songs. This leads him to form a band (and a deep friendship) with a goofy young dude named Quentin (Anton Yelchin). (Arriving in theaters and VOD on Oct. 17)

This Week's Tunes: The trailer features two of Josh's songs, which were actually written by rockers Simon Steadman and Chartlon Pettus.

How Literal Are They? Both songs seem suited for the movie in two ways.

First, there are the lyrics, which include wistful turns like "I'm trying to get home/I'm trying to stay strong" and "You're my sidekick/You're my alibi." It's not hard to imagine those words coming from a man who loves and misses his son.

Second, these tunes sound exactly like something a gifted college student would write. The upbeat ditty mimics the Mumford-esque style that's rocking half of America's dorm rooms right now, and the introspective number could be from any singer-songwriter's debut album.

How Emotional Are They? Look... some critics who saw the movie at Sundance said the songs are unoriginal. But for me, it's exactly because they're so familiar, so perfectly accessible, that they're perfect for this trailer. I associate an awful lot of things with this type of folk-revival rock--deep emotion, howling release---and those are clearly the qualities this story is aiming for. Plus, the driving energy in the faster song suggests that Rudderless is going to be a movie about life and growth, not sorrow and stasis. If it takes some Lumineers-style jamming to get that point across, then I don't mind.

Will We Associate Them With This Movie? Naturally! In fact, if Rudderless is popular, then I suspect the soundtrack will become a hit on its own, just like the soundtracks for The Commitments and Once, which were also about sad people using rootsy rock to get happy.

Overall Trailer Tune Effectiveness: Honestly, the music has convinced me I'm going to love this.