Rooting for the Home Team

PLAY BALL! To celebrate America’s favorite pastime, we’re spotlighting some of the best baseball films that premiered and screened at Tribeca—films that address issues like immigration, ageism and racism through a baseball lens. You’d be surprised at how many there were to choose from. What can we say… Tribeca loves baseball! 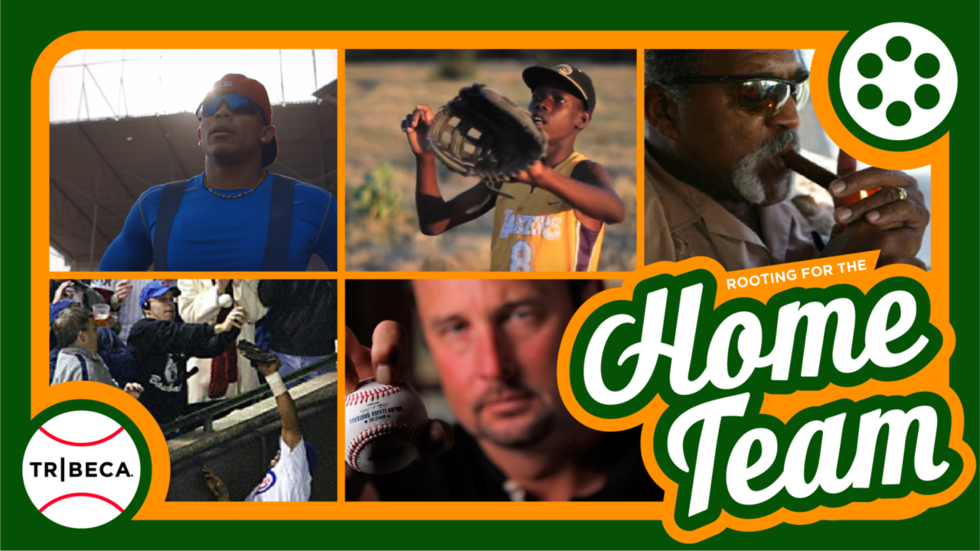 Nothing says spring like Opening Day for Major League Baseball! After all the turmoil last month that led to a lock-out and a late start to the 2022 season, the MLB is back on track. To celebrate America’s favorite pastime, we’re spotlighting some of the best baseball films that premiered and screened at Tribeca—films that address issues like immigration, ageism and racism through a baseball lens. You’d be surprised at how many there were to choose from. What can we say… Tribeca loves baseball!

Side Note: We recognize the lack of female inclusion; we're working on it.

THE LOST SON OF HAVANA

Politics finds its way into most aspects of our lives, including baseball. One need only see professional sports' checkered past regarding racism, sexism and overall lack of inclusion to come to that conclusion.

For Luis Tiant, being born in Cuba and wanting to play ball in the US was an overtly political statement. When he chose to leave his homeland in search of his dream, Tiant never anticipated spending the next 46 years in exile from Cuba. Even though he was torn between his career and his homeland, he went on to become one of baseball's top pitchers, throwing heat for powerhouse teams like the Red Sox and Yankees. Premiering during Tribeca 2009, Director Jonathan Hock’s film follows Tiant on his initial return to Cuba, capturing an inspiring and profound portrait of one of baseball's greatest players.

Sometimes referred to as a “circus pitch,” the spotty history of the knuckleball gets center stage via award-winning filmmakers Ricki Stern and Annie Sundberg’s documentary. Combining game footage with interviews of sportswriters, players, and managers to chronicle the 2011 season, Tim Wakefield and R.A. Dickey discuss the dizzying heights and soul-crushing lows of being one of the few knuckleballers left in baseball. Premiering at Tribeca 2012, Wakefield recorded his 200th (and final) major-league victory in the season before his retirement, while Dickey won the Cy Young Award that November. Proof positive a good knuckleball still belongs in the MLB.

New Yorkers who watched the 1986 World Series can relate to the exhilaration felt when a clutch game is all but over and some miraculous force steps in and changes the momentum of the game. Looking at you Bill Buckner. .

Premiering at Tribeca 2011, Catching Hell is about the aftermath of one such devastating occurrence. During the 2003 National League Championship Series at Wrigley Field, the Chicago Cubs were five outs away from defeating the Florida Marlins and going on to their first World Series appearance since 1925. Cubs outfielder, Moises Alou was set to catch a foul ball that was sailing into the stands that would bring them an out away from ending the 8th inning with the Cubs still ahead 3-0. Instead, a Cubs fan by the name of Steve Bartman reached out and attempted to catch the foul ball, interfering with Alou’s attempt to end the inning.

The Marlins then staged an eight-run rally and walked away with the win. Upon leaving the stadium, security had to surround Bartman to protect him from angry fans who were devastated by having a sure win slip from their grasp. Bartman would join the ranks of Bill Buckner and other famous scapegoats, forever vilified by angry fans.

Director Alex Gibney gives viewers a dark, ominous tale about being the focal point of an entire city’s hatred with never before seen footage and interviews centered on Bartman and Buckner’s costly mistakes.

BASEBALL IN THE TIME OF CHOLERA

Haiti has had more than its share of catastrophic events. Just as upsetting as the events themselves is the lack of help offered in response. Screened at Tribeca 2012, Baseball In The Time Of Cholera is a must see.

Set in 2010, as the cholera epidemic raged in Haiti, the UN denied responsibility for introducing the disease despite mounting evidence. The film centers a young baseball player named Joseph Alvyns, and a Haitian lawyer fighting to raise awareness around their country’s plight. This one is a bit of a tearjerker so have some kleenex on hand.

For some of us, sports provides a form of escapism from the drudgery of daily life. For others, it provides a literal sense of escape.

The Last Out takes a raw look at talent, passion, and naivete, following three Cuban baseball players with dreams of getting out of their impoverished homeland and into the Major Leagues. Throughout their journey to achieve their dreams, they face difficult choices regarding their careers while embarking on radically different paths when those dreams don’t pan out.

The documentary premiered at Tribeca 2020 and won the Albert Maysles New Documentary Director Award, as well several other awards at film festivals across the country.

GET YOUR FOR TRIBECA 2022 TICKETS