Norman Lear daringly ripped through network television boundaries in the 1970s with groundbreaking sitcoms like ALL IN THE FAMILY and SANFORD AND SON, but his finest work might just be this searing, expansive, and prophetic portrait of difficult womanhood. 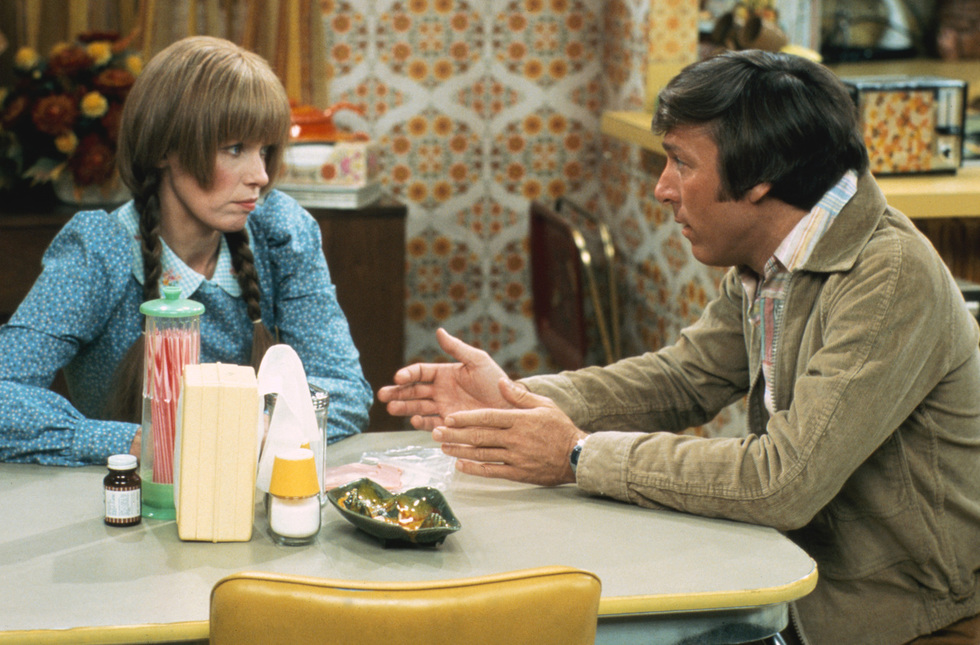 Written on the occasion of Norman Lear's 93rd birthday.


To peek inside the revered canon of classic television antiheroes is to glimpse a particularly sullen club comprised almost exclusively of brooding and belligerent white men. You know the group: Tony Soprano, Walter White, Don Draper, Vic Mackey, Dexter Morgan, Francis Underwood, etc. Occasionally, audiences and critics will make room at the table for antiheroes of different gender and pigmentary situations: Damages' Patty Hewes, Weeds' Nancy Botwin, The Wire’s Omar Little, Nurse Jackie’s Jackie O’Hurley. This is surely a more inclusive means of categorizing television’s wide breadth of difficult men and women, even if its inclination towards contemporary characters and cable programming betrays an elite bias all its own. Nancy Botwin and Jackie O'Hurley aside, each of the abovementioned characters belong to the type of vaunted, prestige-laden, non-network one-hour dramas that is the premier format of choice for these sorts of psychologically complex, morally dubious fictional figures. (And even Weeds and Nurse Jackie are esteemed, Emmy-friendly products of Showtime.)

The episodic antihero was neither born in the nineties nor on cable. As we continue to sort and celebrate this character type, let us expand our thinking beyond the masculine, beyond the cable landscape, and beyond the nineties. Similarly, an antihero need not always be a brutish crime boss or a ball-breaking banshee. In re-thinking and hopefully re-defining the antihero, it's high time that we revisit the unraveling, long-neglected housewife at the center of an absurdist soap opera that ran for two radical seasons in the mid-seventies.

Five years after first jolting Americans out of their contentment with the crusty but captivating bigotry of All in the Family’s Archie Bunker, network television's great iconoclast Norman Lear premiered Mary Hartman, Mary Hartman in January of 1976. A syndicated, nighttime spoof of soap operas (an “anti-soap,” so to speak), Mary Hartman followed the strange, sensational, and yet deeply familiar trials and tribulations of its title character, a naïve and neurotic homemaker struggling to keep her life together amid marital woes, suburban mayhem, and encroaching insanity. Brought to raw, foggy life by the truly idiosyncratic talents of Woody Allen's proto-muse Louise Lasser, Mary Hartman became a surprise cult icon with her wardrobe of tasteful gingham dresses and braided, rope-like pigtails, a wholesomely unsettling symbol of domesticated femininity in the era of Gloria Steinem, Ms. Magazine, and — a bit closer to home — Mary Richards and her pleasingly empowered brand of personal and professional self-sufficiency.

For Lear, launching Mary Hartman was a slyly subversive attempt to draw together two diverging audiences. As an avant-garde serial that aired five nights a week, the show was capable of luring an audience hooked on cliffhangers and juicy plot points like infidelity, homicide, and sexual indecency, as well as art snobs who might be intrigued by an anti-soap that looked like an anodyne sitcom (sans the laugh track or studio audience) and unwaveringly committed itself to a deadpan tone as it boldly penetrated the darkest recesses of American life during the dreary, disillusioned seventies. Not for nothing do we hear about a mass homicide of a five-member family ("Plus two goats and eight chickens!") within the first few minutes of Mary Hartman's debut episode, an incident which Mary and her gal pals discuss with the fretful chirpiness of a literal coffee klatch. In a later episode, Mary's next-door-neighbor Loretta Haggers (Mary Kay Place), a wannabe country superstar and the show’s breakout character, finds sudden success and makes an appearance on The Dinah Shore Show, where she embodies the very essence of the era’s blithely dimwitted indifference when she responds to a question about visiting inner cities with the earnest reply, "I haven’t lived in a city with an inner and an outer..."


Beyond the sharp but shaded social commentary, however, Mary Hartman is perhaps most indelible, at least for this viewer, as a stark, sobering, and admirably unsentimental psychological portrait of a basket case of a woman whom we aren’t meant to root for and who isn’t required to charm us. Instead, we watch her gradually deteriorate, episode by episode, night by night. Two years after John Cassavetes and Gena Rowlands sent poor, sincere Mabel Longhetti under the influence on the big screen, Mary Hartman embarked on a similarly trenchant probe into a terrified woman’s vulnerable mindset. Aided by the fuzzy self-vanishings of Lasser’s divisive, space cadet performance style, which either amazed or unnerved viewers, Mary Hartman is not a heroine to be championed or cheered for. Her continued fixations on seemingly slight matters, particularly the running motif of the "waxy yellow build-up" on her kitchen floors, are droll in their irony but truly bewildering to a viewer attempting to "relate" to Mary. Her inability to cope with the misdeeds and improprieties of those around her, such as the personally jarring reveal of her beloved grandfather as the town’s resident flasher, signal a woman woefully out of time within her decade, unable to fully register the cruelty and corruption of the period. Mary’s difficulties earn our pity and empathy, but they never entirely endear us to a character who, unlike everywoman Mary Richards or Lear’s own lovable lunatic Edith Bunker, is near impossible to cozy up to. Mary Hartman’s neediness — for domestic perfection, societal stability, and withheld affection from her straying husband Tom (Greg Mullavey) — feel like the cynical offspring of Lucy Ricardo’s eager, unqualified pursuit of the spotlight, but much more unhinged and minus the adorable, clown-faced shenanigans.

And unlike Lucy, Mary’s desperation was almost always homebound. Her continued sexual dissatisfaction was revolutionary for its time yet earned its own easily traceable arc from frigid marriage bed to dual infidelities. In contrast to the (temporary) marital bliss of Loretta and her older, plainer husband Charlie (Graham Jarvis) — think a hornier, happier, Southern-fried Fred and Ethel, the marriage of Tom and Mary was rife with bitter impassivity, unrequited yearning, and troubling performance anxieties from the get-go. There is an inherent sadness and delicate poignancy to the tough-minded depiction of this discontented couple (surely the show’s most crucial relationship) that only made Mary’s slow descent into madness all the more harrowing to witness. Even the storylines that we suspect might save or at least rejuvenate Mary — i.e. an affair with a hunky police officer (Bruce Solomon), her participation in a reality TV show that posits her as the epitome of a modern American housewife, in one of the show's most prescient plotlines — only bring her right back to the emotional destitution from which she began. Mary’s insanity culminates at the end of the first season in a long, disastrous, and shattering appearance on The David Susskind Show, in which a trio of manipulative interviews moralistically goad her with invasive questions like, "Are you un-liberated?" and "Were your orgasms better before Johnny Carson?" Mary divulges Tom’s spousal impotency and suffers an on-air nervous breakdown in a grueling scene that has become a sort of pinnacle of difficult television. She is later institutionalized in a season finale cliffhanger, only to become an all-too eager member of the clinic’s "Nielsen" family in the show’s second and final season.

During this episode but also for the entire duration of its brief but brilliant run, Mary Hartman managed to be both an incisive, knife-edged character study and a daring indictment of the media’s scheming influence, making it not just anti-soap but actually anti-television. It survives today as an occasionally patience-testing yet nonetheless profound and peerless curio that has all the audacity and agitation of American cinema’s most daring decade, packaged into the prodigious shape of an oddly-acted, garishly-designed, choppily-edited serial. It was an act of resistance with a powerless, gullible, ahead-of-her-time anti-heroine at its center and indeed it’s possible to trace a direct line from Mary Hartman’s suburban decline to the devastating, critical, yet hilarious self-delusions of The Comeback’s Hollywood has-been Valerie Cherish or the whistle-breaking fantasies of Enlightened’s Amy Jellicoe, a self-help Norma Rae trying to tear down the same unethical consumer system that once held Mary Hartman captive.

It is perhaps all too fitting then that the final notes of Mary Hartman, Mary Hartman bring Mary (and viewers) right back to the beginning. Mary, in a new home but saddled with the same tedious task of polishing the floors and a new but just as discontented partner in that hunky cop, stares with blank-faced confusion at the waxy, yellow build-up on her kitchen floors. "It does look a little yellow, doesn’t it?" Mary asks herself as the series ends on a haunting note of existential unrest, reflected through the disorienting prism of a dull and futile domestic chore. For Mary, there are never any respites. There is no lasting glow. There is always waxy yellow build-up and such is life. 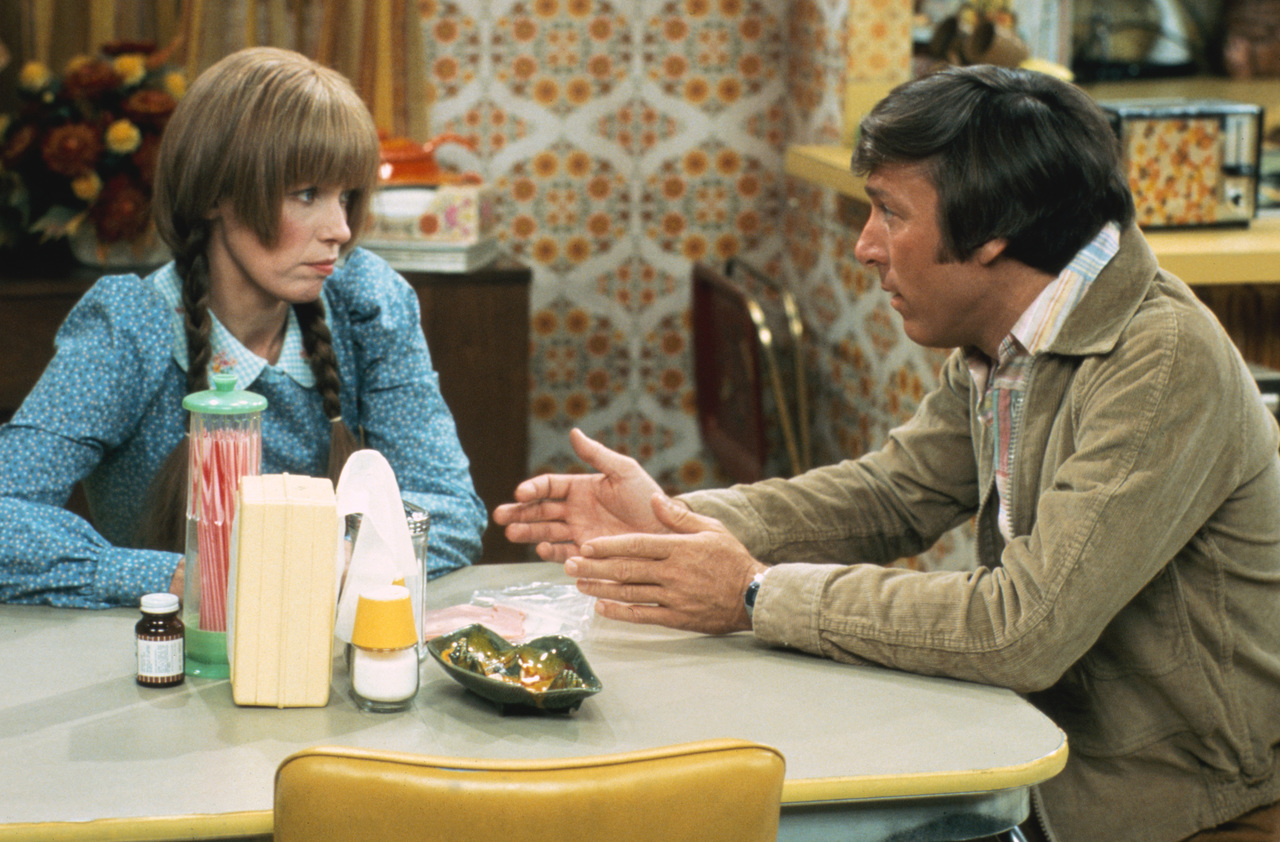 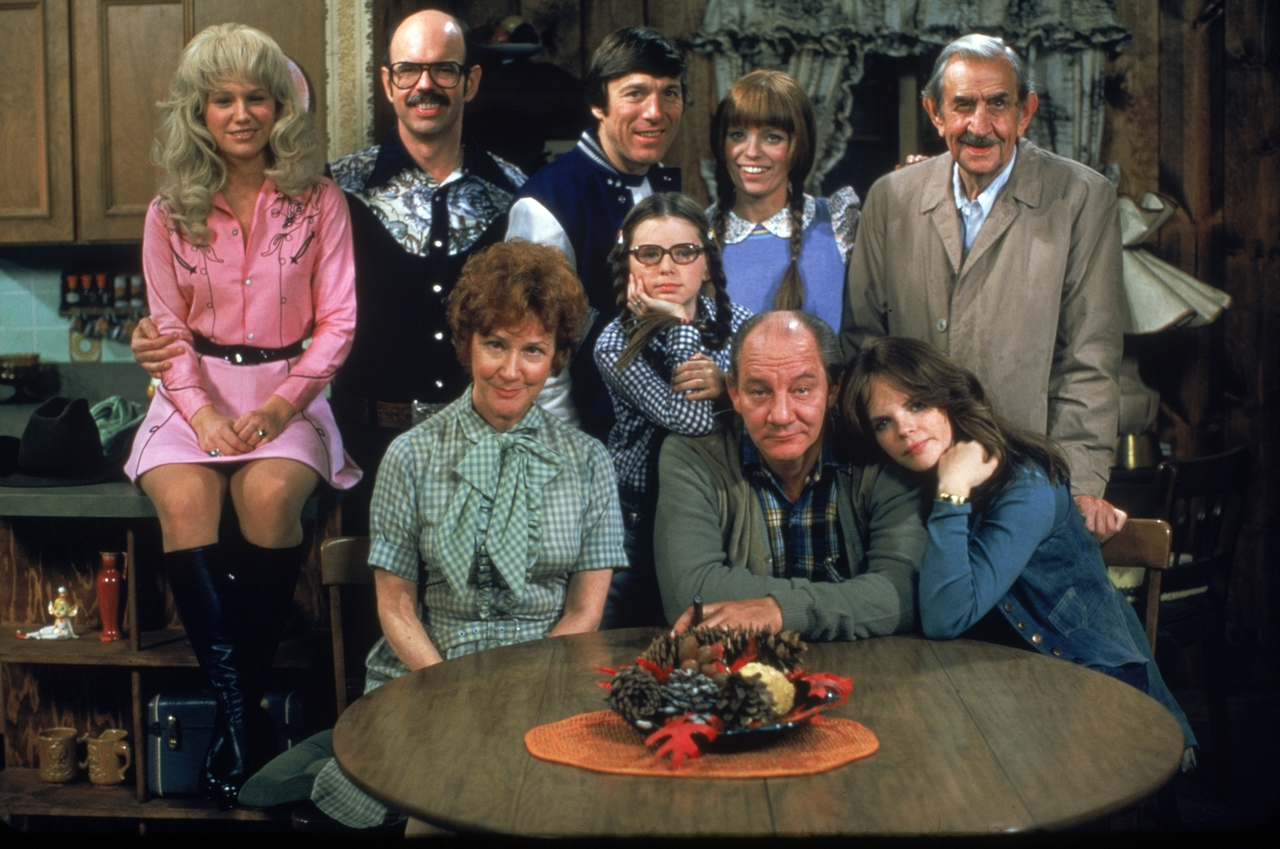 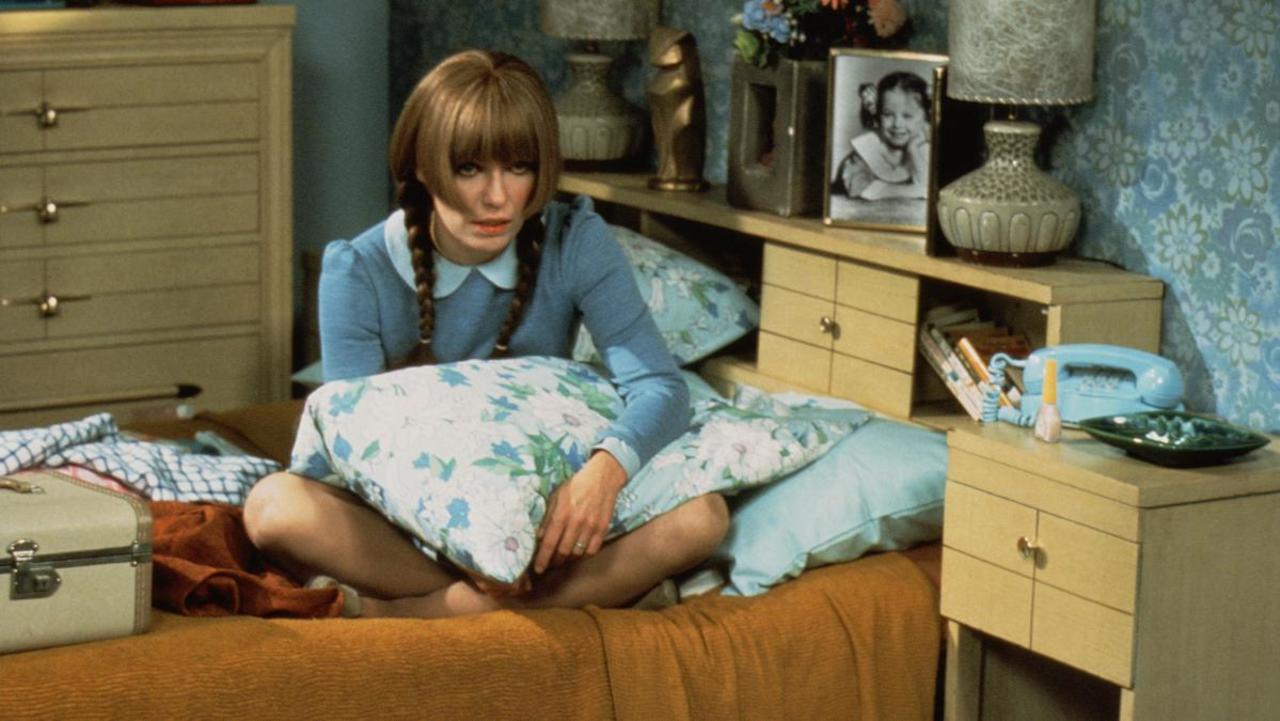 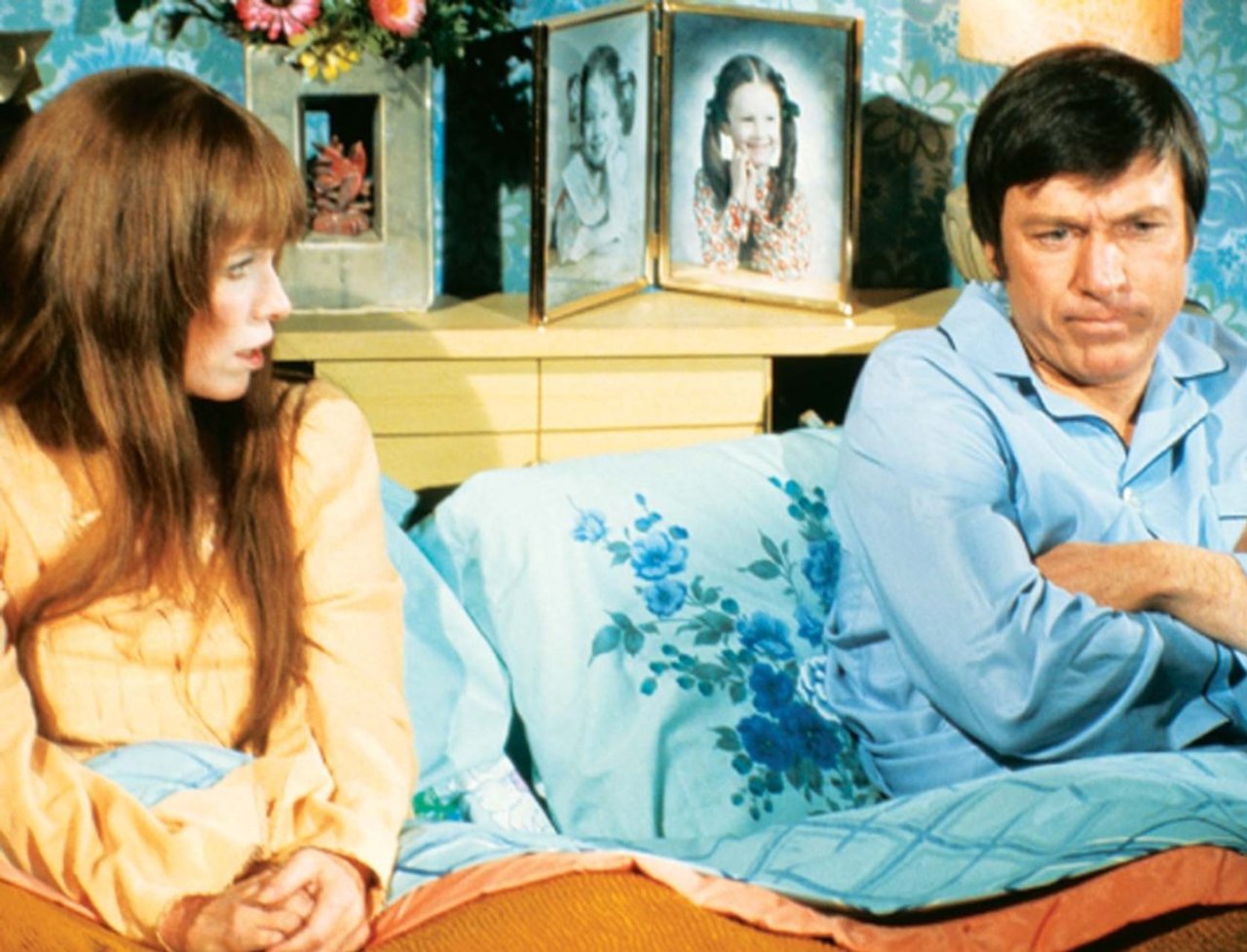 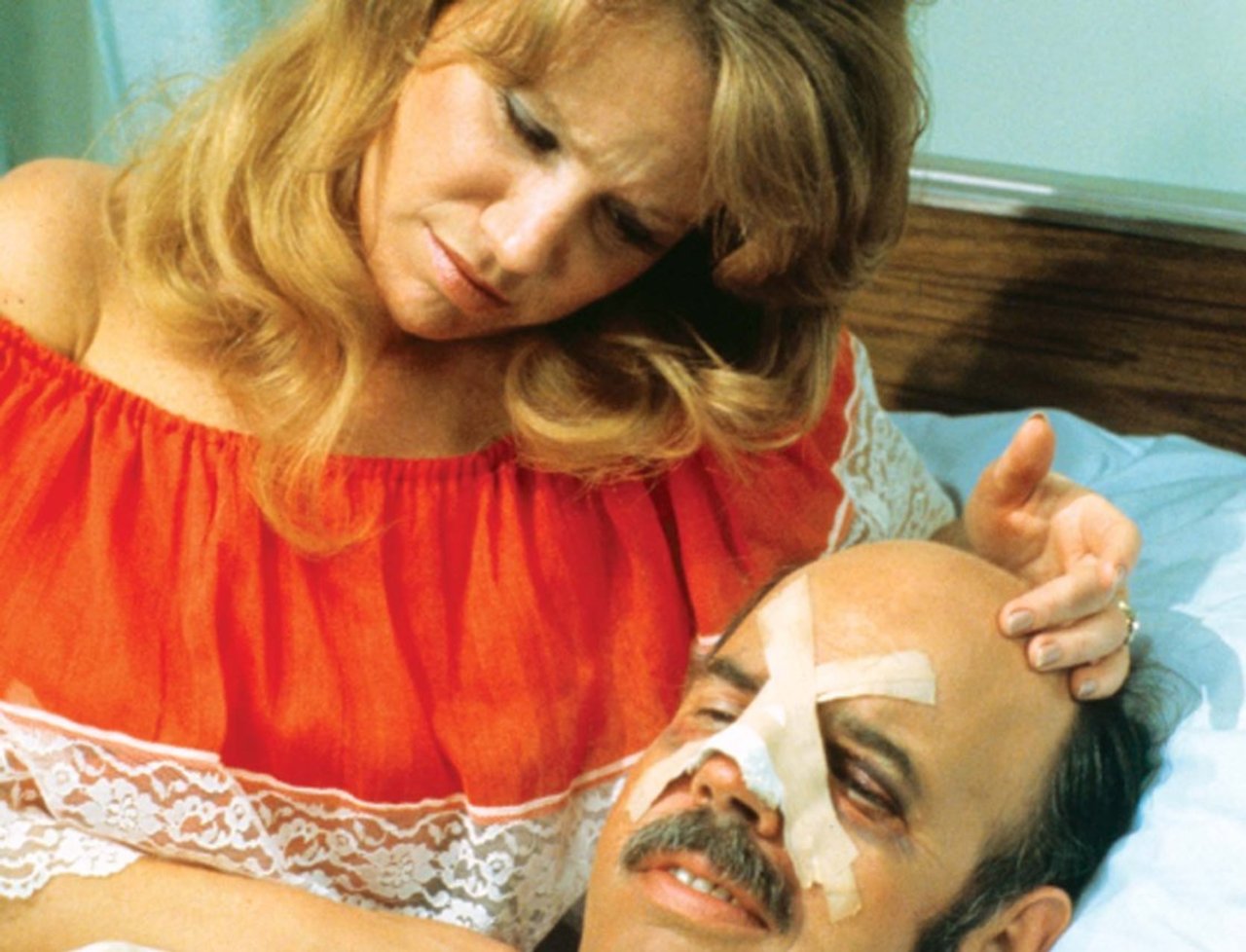 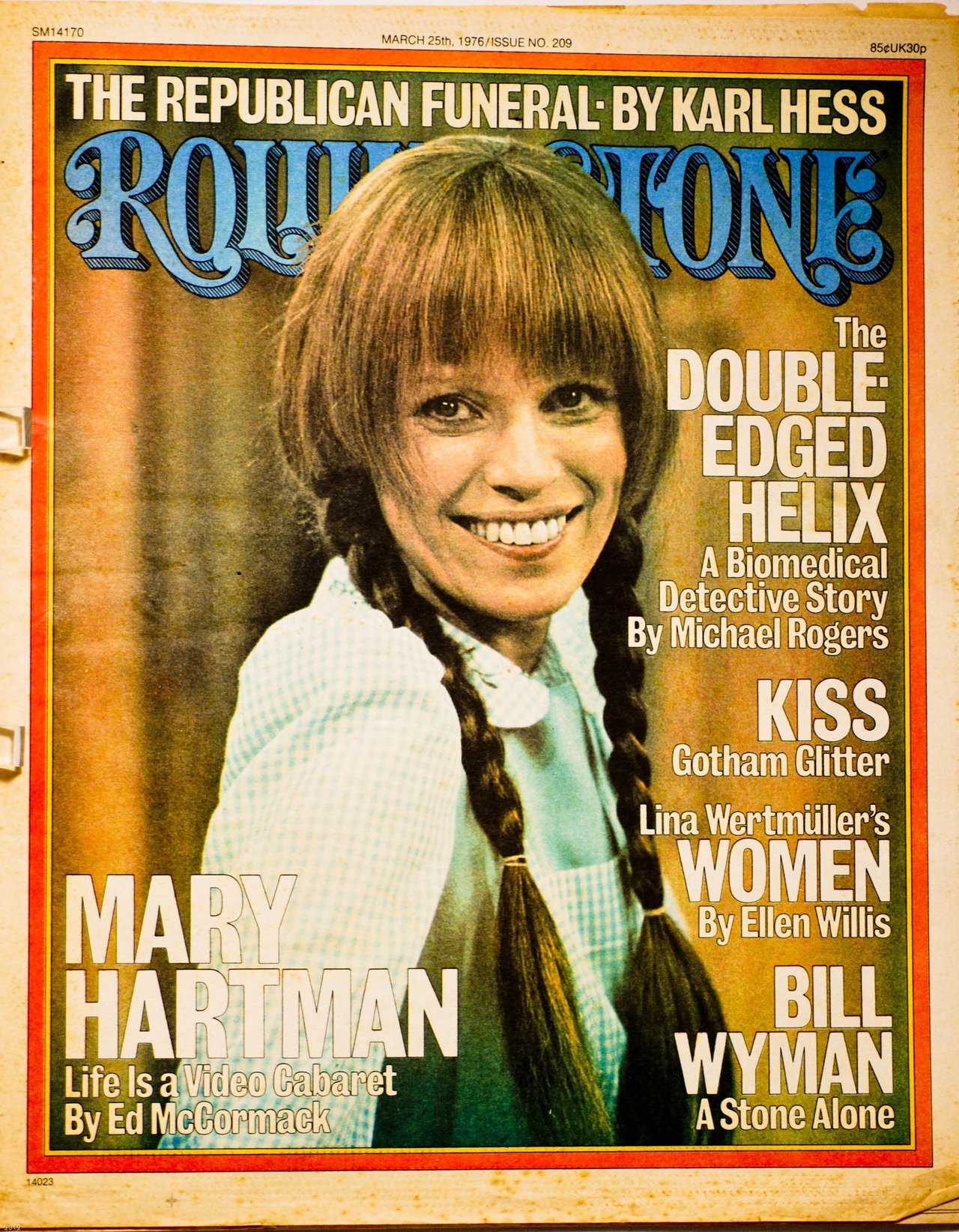 6 / 7
Lasser as Mary Hartman, cultural icon, on the cover of ROLLING STONE 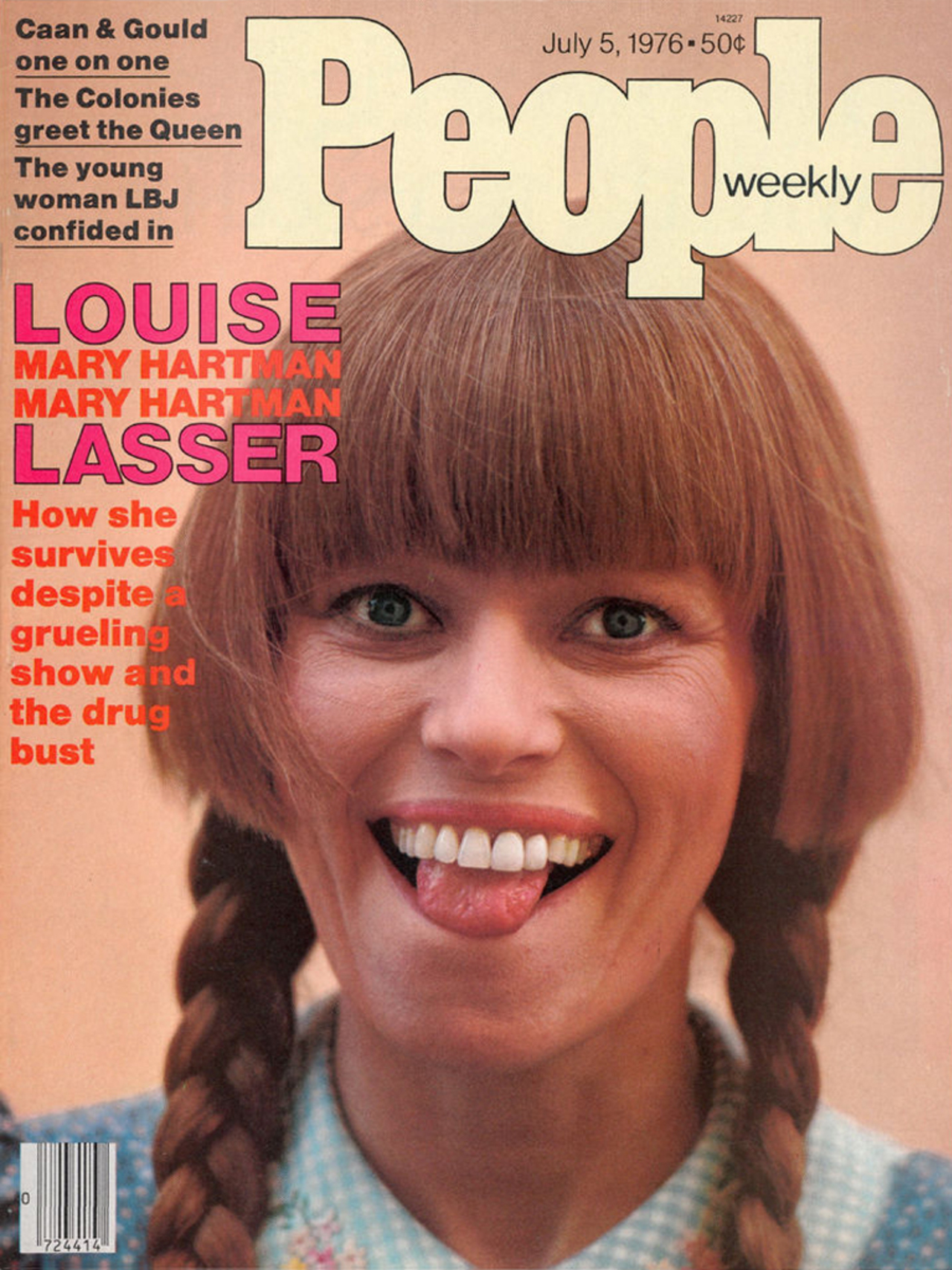 7 / 7
Lasser in-character, on the cover of PEOPLE