Get to know Rashaad Newsome, an NYC trendsetter who's doing big things with storytelling via video installations. 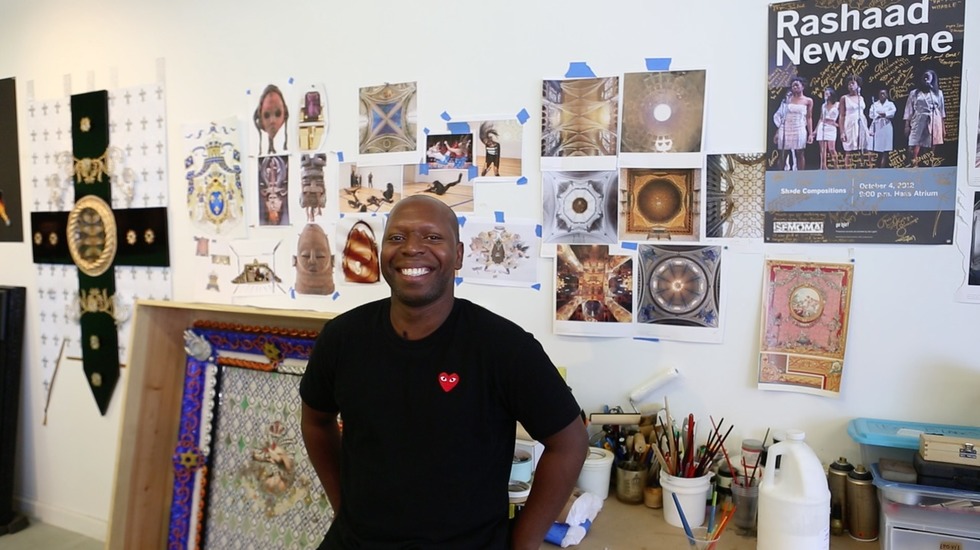 In 2000, Rashaad Newsome, who's known for his college and performance work, moved to New York City to study film. "The work had become compartmentalized," says the Long Island City, Queens-based artist. "People would associate me with performance and the collages, and sculptures, so going into video allowed me to integrate all the different practices I was working with into one medium."

Newsome continued to make intricate collage and performance works that explore the relationship between power and status both in the hip-hop and vogue cultures. In exhibitions like Herald, King of Arms and Pursuivant, Newsome cut both male and female figures out of magazine pages and placed them in baroque architectural scenes that sought to challenge ideas of representation. Those works highlight how status was measured in the ornate details of 17th century European churches with modern-day displays of rank in hip-hop and the birth of 1960s NYC's ballroom "vogueing" scene. By linking the past with the present, Newsome has re-imagined not only power structures but also ideas of sexuality and respectability in communities that have long been marginalized or unseen.

When Newsome started making videos, he focused on the ideas that he’d long been fascinated with for nearly a decade and a half. Started in 2005, Newsome’s ongoing series Shade Compositions explores the gestural expressions of "throwing shade." "There’s a scene in the 1991 documentary Paris Is Burning where performer Pepper Labeija says, 'Shade is, I don't tell you you're ugly but I don't have to tell you because you know you're ugly,'" says Newsome. "That's shade, where performers stand on stage in front of a camera and smack their lips to explore the power of language developed in the vogue ballroom scene as a form of freedom."

At the 2010 Whitney Biennale, Newsome invited dancers into his studio to vogue for his camera. The results were Untitled and Untitled (New Way), which argue for vogue’s legitimacy and, more importantly, the bodies who performs it. "I view these videos as drawings," said Newsome in 2010, "with the dancers acting as my pen, creating lines, shapes, landscapes, and an array of narratives."

Newsome has also tracked vogue dancers in videos such as I.C.O.N. and Knot. With Knot, which was a part of the Brooklyn Museum’s Killer Heels exhibition, Newsome also inspired a real-life performance. Newsome brought Knot to life by having dancers vogue and protesters hold signs that read "R.I.P Eric Garner," "R.I.P. Mike Brown," and "R.I.P. Islan Nettles" to address the recent deaths of unarmed black men highlighted by the Black Lives Matter movement.

As a way to explore hip-hop culture, Newsome has spent the last decade working on a comprehensive six-part video series entitled The Conductor. He motivated disc jockeys on NYC's leading radio stations Hot 97 and 105.1 to ask their listeners, "Who are the most epic emcees that have defined hip-hop?" The results lead Newsome to use a technique called "motion tracking" to create a video installation that meshes the survey results by creating a montage of artists like Lil Kim, the Notorious B.I.G., and A$AP Rocky moving to Carl Orff's "Carmina Burana." It's Newsome way of exploring what the artist believes to be modern-day heraldic gestures in popular culture.

Up next for Newsome is his third annual King of Arms Art Ball, an evening that mixes vogue performance and the artist’s other obsessions. In the following video, Newsome opens his Long Island City studio’s doors to discuss his unique approach to video art.