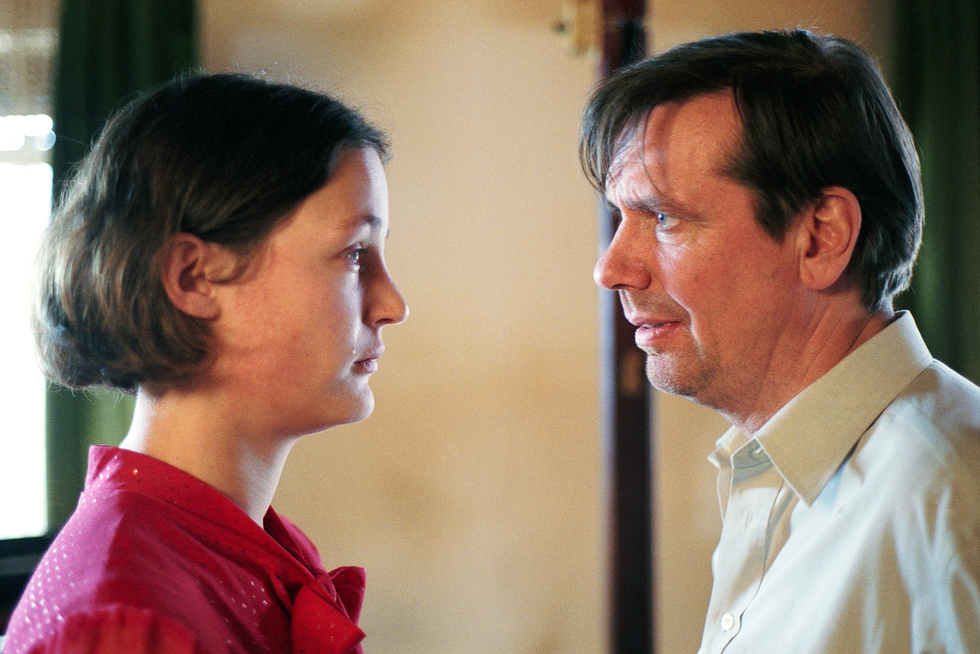 Tribeca: First of all, I really loved the film. I thought it was really original. How did you come up with the story?

Christoph Rainer: It was a collision of multiple things, but most of all—what we call the “generative” moment at Columbia [University]—the first spark was when I was on the subway in New York, and I was reading one of those subway magazines. There was a big ad on the side of the page for a very modern varicose vein removal technology. The ad had this very beautifully lit varicose vein on it. I was wondering how that came about. Who designed this ad? Who found and photographed this leg? Were they casting different types of legs? It was really what made it together, because I went through the same situation with my dad. He had terrible varicose veins and that was one of the main reasons I [had a hard time] inviting friends over as a child, because I knew my dad would always run around with short pants, and I’d always be very ashamed of that. I think what you’re ashamed of always appears within you, because now, I’m 29, and I’m realizing that I’m slowly developing varicose veins. It can be inherited, along with your blood type. I feel like this is allowing me to stand up and not be ashamed of it. I want to talk about it. All of this went along with the fact that I fell in love just before writing this film. It was just one of those things where I fell manically in love. I would go overboard in order to chase that girl. I think everybody knows that kind of feeling, to not care anymore what anyone else thinks, or even what the other person thinks. Your love and desire are just such overwhelming feelings. I think out of all these things are really what made the film come together.

T: Why do you think love stories, or even stories about obsession make good short films?

CR: I think one thing that is always so wonderful about obsession movies is that moviemaking itself is such an interesting obsession. With short films, a film around 20 minutes long, people might watch it over a lunch break. It’s something they watch and maybe don’t think too much about anymore. It took me and about 60-70 other people many months to do it. We put a lot of money and energy into it, and I didn’t sleep during the production. I feel like it’s just this human drive to do something. It doesn’t make much sense, but our passion and our desire is much bigger than all that. I think that film is a beautiful format for that, because it’s exactly that. At least to me. That’s what I love about it. You can completely reach outside yourself through this process.

There are all these conversations in cinema about these little pieces of audiovisual rumination. Whether it’s from Austria, or France, we all just communicating these very brief moments.

T: A big part of the film was the fantasy aspect. What are you inspirations, artistic or otherwise?

CR: I think it has a lot to do with a teacher I had when I was studying at Filmakademie Vienna, because my first directing teacher there was Michael Haneke. I don’t know if you know his films, but he’s very much like his movies—a cold, sadistic, difficult professor. He has very rigid ideas of what cinema should be, and what artistic cinema should be: it needs to be realistic, and it needs to be an observed reality. He feels you should be honest about reality and the representation of such. He’s an incredible filmmaker, without a doubt, but I’m not so sure about his qualities as a professor. Even though all his films are incredible, I rejected this idea that we have to present reality as it is, in order to make an artistic film. It was very limiting for me. When I had the chance to do this film, I really wanted to use all the tools cinema had given me: music and light and montage. I wanted all the acting to be overly dramatic. I wanted to tell a story that is bigger than real life, beyond the reality we see on the street. As I said earlier, for me, film is such a subjective medium. I feel like desire on screen needs to be bigger than mere thoughts. It can go overboard, it can be musical. It can be fantastical. I think it was kind of like this protest over this professor.

T: Why do you like making short films, and what do you get from them, that you don’t necessarily get from feature films, both as a filmmaker and an audience member?

CR: I think making a short film is an incredible experience as a filmmaker, because it allows you to work without boundaries. In comparison to feature films, where there’s more length, as well as more money involved,there are certain tools you should use, in order to keep the audience engaged, and also to make the money back. You have to be entertaining, and be inviting, and blah blah blah. But a short film gives you more opportunity to experiment. It can be 10 seconds, 20 seconds, 5 minutes, 30 minutes, and everything in between. Because I’ve also done some very experimental movies and some semi-documentary films—animation and fiction, I think it’s just a wonderful moment to be completely free. You can let yourself go and just experiment. For an artist, that’s one of the greatest things you could possibly do. I think with filmmakers, that can be a joy. For audience members, it’s about communicating a very unique view of the world. For 10 minutes, 20 minutes, you get to bury deep into this person’s idea of what the world is, or what a moment in his life is. I also organize a little short film festival in Austria that has taken place for the past eight years in August. It’s just so wonderful to invite films from all over the world, and have an audience watch those films. There are all these conversations in cinema about these little pieces of audiovisual rumination. Whether it’s from Austria, or France, we all just communicating these very brief moments.

T: Why this film, and why now?

CR: From a very unemotional, purely production point of view, I won the TIFF Emerging Filmmaker Award in 2013, and through that—but also through other things, including my Columbia studies, I was invited to Baden-Württemberg film academy that was very rich in terms of production value. I was invited to basically shoot the film there, and they would give me a team and equipment. It was a real luxury. Usually short filmmakers wouldn’t get that. Basically they said I just needed to bring a script and I could shoot it there. In addition, I also got a cinematographer and a co-producer from Vienna, and an editor from the Filmakademie Vienna. It ended up being like a co-production between Columbia University in New York, Filmakademie Vienna, and Filmakademie Baden-Württemberg. I think the emotional motivation, most of all, was that I was really in love the first time in my life. For the first time, I had fallen completely in love. It was unreasonable, and it was almost manic. I had the strongest feeling that it couldn’t possibly work out because I was way too invested. I think I wrote my own negative, self-fulfilling prophecy, almost. It became about how a first, deep love could go down.

T: What was your favorite scene to film?

CR: It’s difficult, because the film was not very fun to shoot. Everything was very difficult, and the sad thing is that it was supposed to be exactly the opposite. I’d wanted to create a very intimate team, and to work with these actors, whom I love very much. I wanted to work with them and improvise, and explore the moments. It ended up being a much bigger production than we’d originally intended. We actually had about 40-45 people behind the camera. It was a very slow process, with a difficult team to navigate. It took some of the fun from the process, at least for me. But, there was one scene—the key scene in the movie—when Lisa, our protagonist, finally stands across from Alf, the man she loves so much and she wants to tell him that she loves him and that she’ll never forget him. She just wants to be with him, and to hold him, and to love him, but she cannot find the courage at first, and she’s really struggling for words. Then, her father opens this greeting card, and basically supports her in confessing her love to Alf. The great thing when we shot it is that I wanted to use a very standard procedure. I wanted to do a couple shots from a little further away, paired with a couple closer shots that we’d be able to edit in post-production. The actress, Vicky Krieps—if anything is good about this film, it’s definitely her, and I owe her so very much from being in this film. With every take, she was so breathtaking, so we just kept this one long shot, where it just slowly goes closer and closer and closer. During shooting, it was very electrifying, because we shot it four times, and each time, everybody actually forgot what they needed to do on set. We were just all watching the actress committing her love and hiding her tears. I remember the dolly grip, during one of the takes was so taken by her performance, that he forgot to push the dolly forward. It was an incredible take, and I remember I said to her, “It’s perfect, but we have to do it again, because the camera didn’t go forward!” It was we were all so emotionally taken by her performance.

T: That’s incredible. What are you looking forward to most about KINO! 2015?

For a complete listing of the KINO! 2015 schedule, click here