We talk to the actor/producer about the twisted dark comedy and the advantages of working with friends and family. 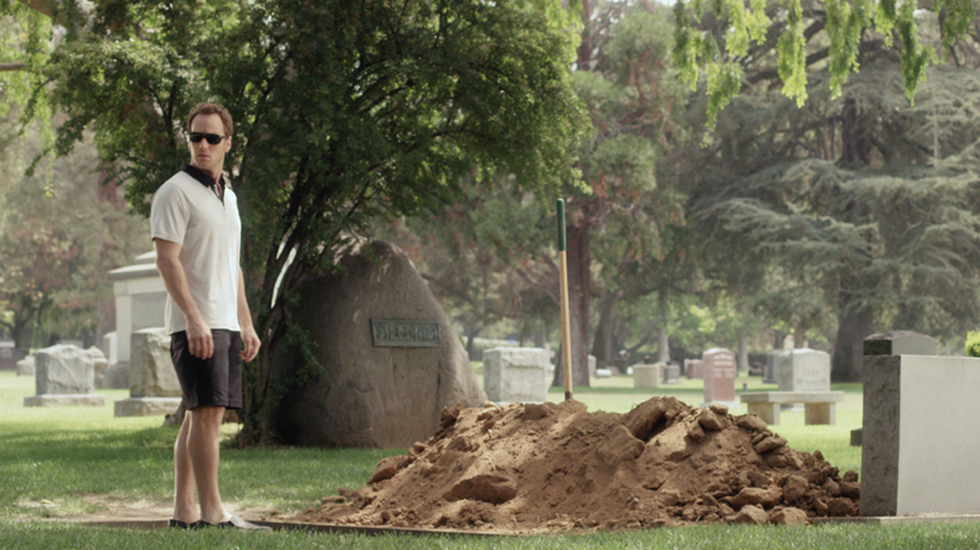 Written and directed by Scott Foley, Let’s Kill Ward’s Wife follows a trio of pals who all dislike Stacy (Dagmara Dominczyk), the wife of their friend Ward (Donald Faison). One of these friends, David, played by Patrick Wilson, is an out-of-work actor estranged from his wife and searching for motivation. When Stacy is accidentally (maybe?) killed, the men scramble to cover up the homicide and encounter a series of hilarious and horrifying problems.

We chatted with Wilson over the phone to talk about his participation in this macabre suburban black comedy, his reaction to producing his first feature, and Scott Foley’s incredible work ethic.

Tribeca: I don’t think I’ve ever seen a black comedy quite like Let’s Kill Ward’s Wife. What were your initial reactions when you read the script?

Patrick Wilson: I just loved it. From the moment I finished reading the script, I knew I wanted to do whatever I could to help Scott [Foley]  get it to the screen. Plus, it was also very important to me to have him direct the film. He’s sold scripts before, but Let’s Kill Ward’s Wife is his first feature. Scott’s got this dark and dry sense of humor that I don’t think the majority of the public has seen before. He has such a unique voice. I am so proud to be part of the film.

The film is Scott’s baby; he served as the captain of our crazy little ship.

Tribeca: This is the first project from your production company Lost Rhino Films that you formed with fellow cast mate James Carpinello. Can you talk about your first producing experience?

PW: The experience was wonderful because this was a project that James and I got to co-produce with Scott. Our company had previously been attached to a couple of projects in development, but those fell through. Let’s Kill Ward’s Wife was just the right fit for our first project, given our tight-knit group of family and friends. We were able to jump in with both feet. In addition to handling most of the business aspect of producing, James was responsible for bringing on the majority of our crew who we all instantly clicked with. It was a great learning experience.

Tribeca: Was it difficult to juggle the roles of producer and actor?

PW: I didn’t think so [laughs]. I approach my time on set the same way every time whether I am working on a big movie or an indie or a TV show. I believe in the spirit of collaboration. The best producers I’ve worked with in the past have always embraced the creativity of those around them, so I invited everyone to give input. As a result, with this film, we were all on the same page from the beginning.

Whatever choices we made were for the good of the picture—whether it was a production note or an acting note or if we had to cut a scene. I think if you run your set with that in mind, you can handle any problem that comes your way.

Tribeca: Did something about the character of David particularly stand out to you? Did you consider any of the others role?

PW: You know, I’ve played a lot of characters like Tom, who’s the main protagonist in the film. I always thought Scott should have played him, and I’m so glad he did [laughs]. Plus, it was his script and his first time directing a movie, so why not go all the way?

As for me, I really liked the journey of David’s character. In the beginning, he is this man-boy actor type, but as soon as the murder happens, he begins to change. It’s almost like he’s found his purpose, oddly enough [laughs]. All the edits to the character of David through the various drafts were to enhance the clarity he finds throughout this ordeal, twisted as that may be.

Tribeca: One of the things I thought was interesting about the movie is that all the characters’ lives and situations are made better because of the murder.

PW: [laughs] I’m glad you picked up on that. It’s one of the things that I loved most about the script. No matter how dark the comedy is, it’s undeniable that the lives of these men and their wives are greatly improved after Ward’s wife dies.

Tribeca: It’s fair to say that Let’s Kill Ward’s Wife is a family affair. All of your wives happen to be actresses. Were they excited about the project?

PW: Of course! As we started to put the movie together, we realized that we didn’t need to look very far outside our very talented group of family and friends. I can’t speak for the others, but my wife [Dagmara Dominczyk] thought it would be an incredibly fun experience. By playing Stacy—who is Ward’s wife—she got to play both hideous and hilarious. It’s a very fine line. The audience has to hate her, but has to love to hate her.

Tribeca: How long was the production period?

Tribeca: Were you able to have the luxury of rehearsal on set?

PW: No, it was pretty much run and gun. Our pre-production period was much longer than the shoot. Scott had written the script a few years ago, but was working on it constantly right up until we went into production in the spring. He put so much effort into the film—his work ethic was  really inspiring. We all had ideas on how to strengthen characters, and we offered random additional notes that Scott really took into consideration, but he added his own spin. Once James brought on our producer Joe Hardesty, everything started to click.

Everyone is looking for that VOD deal. You make your money back more quickly, and more people can see your movie.

Tribeca: If you had to describe Scott Foley as a filmmaker in one word, what would it be and why?

PW: Solid. He had a clear sense of the movie he wanted to make, which was key because he had to wear so many different hats. The film is Scott’s baby; he served as the captain of our crazy little ship.

Tribeca: My favorite sequence in the movie was the bloodletting scene in the bathtub. Can you talk about the logistics of shooting that?

PW: We had this shoe string budget for our make-up and special effects department to work with, and they still pulled that scene off beautifully. I’ve been on so many big movies where gags like that haven’t worked. The fact that we managed to make it happen is pretty remarkable. Our make-up artist, Carrie Mercado, just killed it [laughs], and yes, I did mean to use that term.

We had a couple of takes to get that scene right, and it helped that my wife Dag was incredibly game. There were no body doubles available, and we had only one leg we could use for the cutting gag. It was a little surreal to have my wife playing dead in a tub and have one of my best friends with his boots on stomping on her chest [laughs], but we’re all professionals. She had the most fun  of all of us. Everything just came together. I don’t think we could ever recreate it.

Tribeca: Let’s Kill Ward’s Wife is currently available on VOD and iTunes. Have you fully embraced the digital age of distribution?

PW: I absolutely have. It’s just the way the business has gone. Plus, I think there are movies that I’ve done that, if the makers had embraced digital distribution, would have made a lot more money. Five years ago, I think limited theatrical expansion would have been the most preferable option, but that’s not the case now. Everyone is looking for that VOD deal. You make your money back more quickly, and more people can see your movie. It’s a total win-win.

From day one, we always envisioned a VOD release for Let’s Kill Ward’s Wife. We never went looking for some studio deal. We wanted our movie to be available to as many people as possible. It’s a real thrill for all of us.