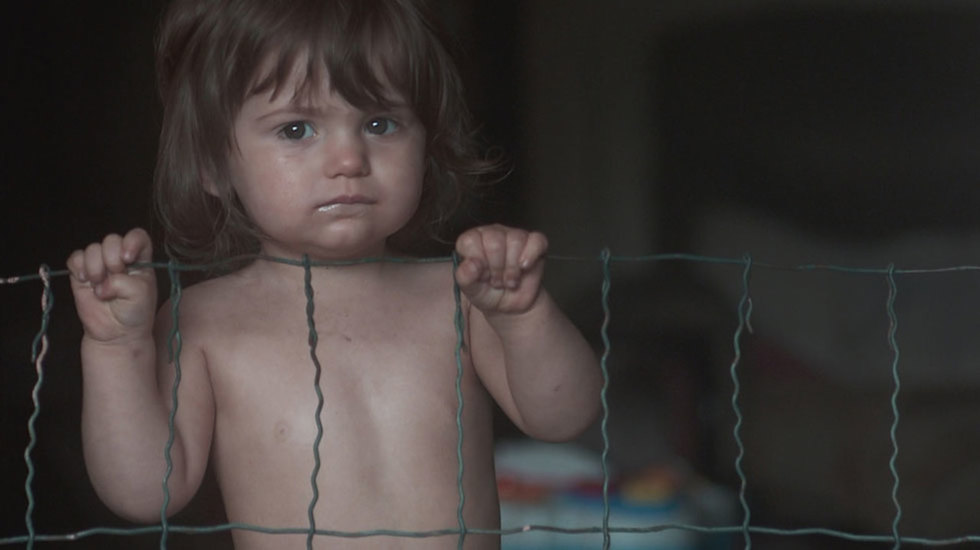 Tribeca: Tell us a little about Oxyana. How did you first hear of the Oceana, West Virginia, which can aptly be described as the “epicenter of the Oxycontin epidemic?”

Sean Dunne: This all took place in January 2012. My friends Jonny Fritz, Colby Glenn, and I were taking a road trip from New York to Nashville with a stop in Jonny’s hometown in rural Virginia. We planned on stopping in West Virginia for a night and asked some people in Jonny’s hometown for advice on where to stop. They suggested that we stop in Oceana, as they frequented the area for AVTing. So we did.

We rolled into town just as the sun was going down, and I was immediately captivated by this place. It had such a stripped down look, a rawness to it. We noticed that a lot of people were hitchhiking and, being the poor decision-makers that we are, we decided to pick a few up. The first person we met told us about the dark underbelly of the town while he shot oxycontin into his hand, in front of us, within minutes of our meeting him. It was clear to me that what was going on wasn’t normal. After a few similar encounters, I decided we should come back and do some more digging around. A few months later, in April 2012, we went back for a visit and decided then to do a portrait of the area, its people, and the Oxycontin epidemic.

Tribeca: From inception to print, how long have you been working to get Oxyana on the big screen? How many hours of footage did you compile?

SD: It has been almost exactly 1 year in the making. I decided that this would be my next project in April 2012, and we launched our fundraising campaign in late May. We shot for 4 weeks over the course of last summer.

Tribeca: Oxyana is an incredibly raw and intimate look into the struggles of a community and its members whose lives have been dramatically altered due to their use of Oxycontin. Was there any hesitation on the part of the Town’s inhabitants to be so open about themselves to a camera crew? Did they choose to look at this documentary as a cautionary tale for others?

SD: There is always going to be hesitation and backlash when you’re doing a film like this. We understood that and took it very seriously. Everyone that participated in the film did it for their own reasons but there seemed to be a collective attitude that it was no secret that things had gotten out of control in Wyoming County and that having their voices heard could help bring some attention and help to the area.

For me the most surprising part was the subjects’ telling me that the interviews had an almost therapeutic effect on them. They left the interviews feeling a little better, like they had gotten something off their chest. I don’t think they were used to verbalizing what goes on there to an outsider, and that’s partly where all the raw emotion came from...actually hearing themselves say this stuff.

Some people chose to do drugs on camera or right before they went on camera; some didn’t.

Tribeca: Part of the reason that Oxyana is so affecting is the candidness of its interview subjects. How did you choose the people you focused on? Were you surprised at their openness?

SD: We didn’t deny anyone. If someone reached out and wanted to speak with us, we went to them. We spoke to a lot of people and each one was as compelling and pertinent to the story as the next. That made the edit uniquely challenging. Normally it’s quite apparent what needs to go and what needs to stay, but with this film, we were really forced to carefully consider each interview. Ultimately, my editor Kathy Gatto and I chose a cross section of people that best reflect or articulate what’s going on down there.

Tribeca: Most of the interview subjects were clearly on Oxycontin or other substances while they were on camera. How did you handle that? What other challenges did you encounter while filming?

SD: We took a hands-off approach when it came to that stuff. Some people chose to do drugs on camera or right before they went on camera; some didn’t.  Either way, we didn’t say a word to them about their state.  I didn’t feel it was our place. The drug use in Oceana was very matter of fact, and we got somewhat desensitized to it, at least while we were there.

For me, the actual drugs and drug use became the least of my worries; it’s the constant, lingering threat of violence that really kept us on our toes. That black cloud of desperation and the senseless cruelty that hopelessness breeds was pretty inescapable. We had more than our fair share of terrifying encounters with people who didn’t like us digging around in the drug culture down there, but we got through it.

Tribeca: The score of Oxyana is haunting, making in a perfect companion to the poignant images in the film. Who did the music and can you discuss your collaborative process?

SD: John McCauley of Deer Tick and Jonny Fritz did the music. I knew from the beginning that music would be used sparingly and that we would avoid using music as emotional cues during the interviews, but I still wanted the score to be noticeable and impactful.

I went straight from the last week of filming in Oceana to Nashville to record the music. We spent a week in Jonny’s living room recording everything. At the time nothing from the film had been edited together so the boys had to do a good amount of translating my descriptions into songs that would fit that tone. One exception was at the end of the week when I came to the session with a pivotal scene from the film and played it for McCauley.

The moment it ended, he kind of quietly said, “I think I have something.” He then proceeded to lay down the guitar part that sets the tone for the whole film in the opening montage. Totally slayed it in one take. I honestly couldn’t be happier with the way the film’s music turned out; it blows my mind how spot on it is. Compiling the score might have been my favorite part of the process.

Tribeca: Oxyana is a movie that will linger with audiences long after they leave the theater. What role do you hope Oxyana will play in curbing this country’s abuse of prescription drugs?

SD: My hope is that the film resonates with people on a human level and that it inspires some thoughtful dialogue and debate about why this has happened. I want it to be clear that we didn’t set out to make a social action doc; the film is a portrait that does not offer any easy solutions because there are no easy solutions. It’s a really goddamn messy and complex situation, and this film doesn’t pretend to have the answers.

This was meant to be more immersive than informational. To me, a truly great and satisfying documentary is one that raises more questions than it ever dares to answer. If people walk away from this film knowing what this place and this problem really feel like, then I’ve done my job.

Everyone that participated in the film did it for their own reasons.

Tribeca: Oxyana was completed thanks in part to the aid of a successful Kickstarter campaign. Do you have advice for filmmakers who might consider using the site for fundraising?

SD: Kickstarter worked out great for us, as nerve wracking as it was. We met with them before we launched because we didn’t want to come off like the complete derelicts that we are. Their basic advice was for us to have our shit in order before we launched and to not rely solely on our friends for donations. Other than that, my only advice would be that once you get this money, take it straight to a casino and double that shit. Think about what twice that money could do for your production. And what could possibly go wrong?

SD: Spending some more time getting to know the programmers and the people that run the festival. They see everything and have an unbelievable wealth of knowledge about what’s going on in film.

SD: If it means anything to anyone, this film is the best thing I’ve ever been a part of.