Home » Tribeca News » ORIGIN STORY: LOOKING BACK – AND AHEAD – AT TFF2015
View All News

13 Festivals. 4.9 million attendees (and counting). And it all started with a single vision: To bring a creative heartbeat back to lower Manhattan. 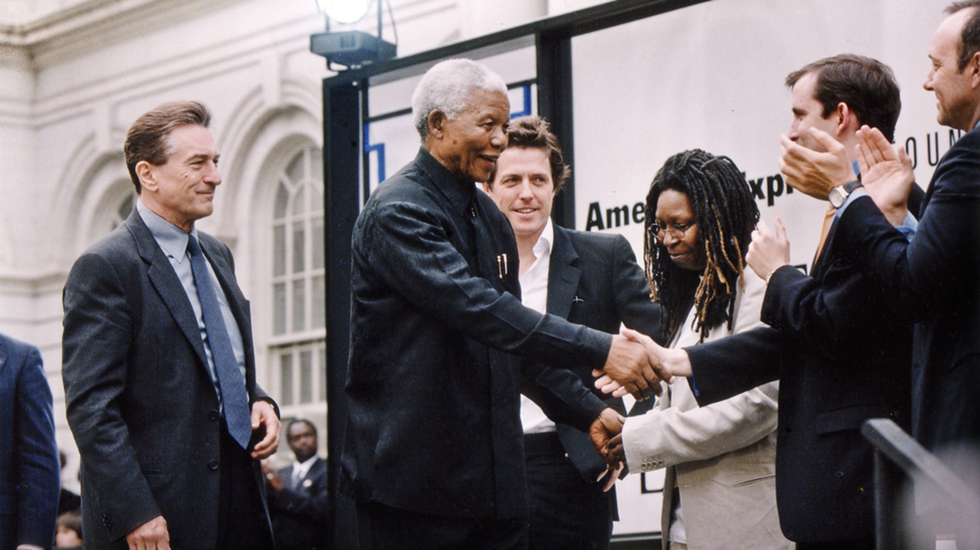 “What you have to understand is that after September 11th, this neighborhood was decimated,” said Sharon Badal – one of Tribeca’s first three employees. (We now count 100 full-time employees, 378 seasonal staffers, 33 interns, and a festival crew of about 900.)

Ten years in, festival co-founder Jane Rosenthal admitted to Gotham Magazine that that very first fest – which came together in a head-spinning 120 days, fielded 1,300 submissions and welcomed 150,000 attendees from all over the world – was supposed to be a one-take thing.

“We truly started the Tribeca Film Festival out of a need we saw in the community following September 11. In our minds, it was a one-time event to help bring as many people to the neighborhood as possible.”

Calling it a success would be an understatement.

President Nelson Mandela attended TFF’s opening day ceremonies (Badal remembers literally running to see him speak at the City Hall press conference, addressing the crowd about the power of film to unite, humanize, and inspire us all).

“Our office was five blocks from Ground Zero and we were showing I.D. just to get to work below Canal Street,” recalls Badal, now director of short film programming and initiatives at Tribeca Film Festival.

Since then, TFF has debuted and screened over 6,000 films, and partnered with organizations such as the 9/11 Memorial 5K Run/Walk to raise funds to honor and celebrate the stories of New Yorkers, artists, activists, and cultural heroes the world over.

Today’s festival is our most ambitious yet – setting records not just for ticket sales but for diversity behind the camera (this year we celebrate the highest percent of women film makers in festival history), and the volume of work we’re showing (we vetted a record 3,147 features and 3,076 shorts).

There’s so much to create and to discover in the festival days and years to come. We invite you to keep watching – and celebrating – right along with us.