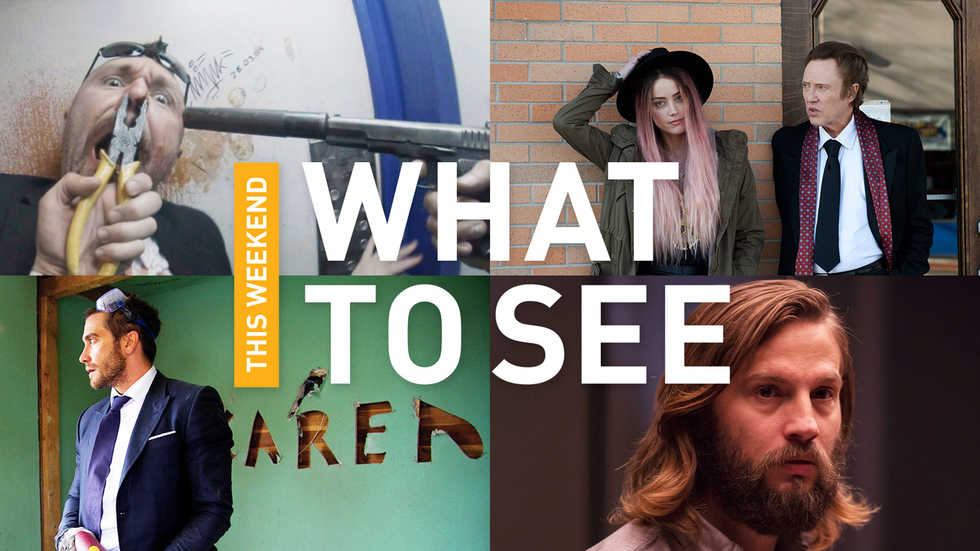 Sad fact: It's been seven years since Karyn Kusama, who became an overnight sensation at Sundance in 2000 with her indie debut Girlfight, last released a movie. That big-studio-backed production was the horror-comedy Jennifer's Body, a box office disaster that more or less sent Kusama back to Hollywood’s bench. But after watching her latest independently made film, The Invitation, there’s one question that demands to be asked: Why in the hell are producers and/or financiers not tossing money her way to make something new once a year? Ignoring the fact that Jennifer’s Body is far better than mostly everyone seems to want to admit, The Invitation is undeniably the work of a master storyteller and first-rate builder of white-knuckle tension. It's more than a new calling card for Kusama—it's an unexpected assertion of greatness.

The plot, largely set in one location, centers around the worst L.A. dinner party imaginable. A group of old friends reunite at the suddenly new-age-hippie-minded Eden (Tammy Blanchard), who’s living with her equally peace-and-love new boyfriend (Michiel Huisman) following the aftermath of her son's accidental death; the guest-of-the-hour is Will (Logan Marshall-Green), Eden’s ex-husband who’s now socially awkward, withdrawn, and increasingly suspicious of his former lover’s new way of living. For one, she "entertains" her guests with VHS footage of a person dying, and, for another, her two recently acquired friends Pruitt (John Carroll Lynch) and Sadie (Lindsay Burdge) have a knack for inappropriate conversation and naked flirtation, respectively. As the night progresses, Will questions her hosts' motives, but are his worries justified or the byproducts of PTSD and his recurring mental flashbacks of time spent with his now-deceased kid?

There isn't an off second, let alone minute, in The Invitation, a marvel of suspense and taut characterization. Through close-ups of her on-point actors, a darkly hypnotic score, and perfectly timed moments of heightened sound designs, Kusama ratchets the unease like Hitchcock in his prime, and co-screenwriters Phil Hay and Matt Manfredi expertly draw out the answers and reveals until going full genre freak-out for the gnarly third act. But even as The Invitation unapologetically embraces its horror side, Kusama never loses sight of the story's weightier themes of remorse, sadness, and emotional desperation. She's been waiting too long for this moment to waste her time on any cheap thrills.

Where to see it: IFC Center, Videology Bar & Cinema

Over the last three years, the 35-year-old actor has certified himself as the most interesting and daring performer this side of Tom Hardy, picking challenging roles that have required him to alter his physical appearance, get extremely dark, and boldly defy his natural pretty-boy handsomeness. He played dual parts in the mind-bending and severely underrated Enemy, gave Travis Bickle a run for his blood-drenched money in the cynical character study Nightcrawler, and singlehandedly saved the otherwise cliché-wrought boxing flick Southpaw with a ferocious performance.

In Dallas Buyers Club director Jean-Marc Vallee's intriguingly uneven Demolition, however, Gyllenhaal isn’t able to disappear into any exterior or character-driven abnormalities. He plays Davis Mitchell, an unhappy and anger-prone guy whose only way of coping with the sudden death of his wife is to break stuff, and who's finally able to feel again once he befriends a vending machine company’s customer service rep (Naomi Watts) and her precocious young son (Judah Lewis). The reason why they initially connect is comically mundane: Davis writes her company a series of furious letters after a bag of peanut M&M's he paid for gets stuck in one of their machines.

Demolition’s biggest weakness is that its script has little more to offer than heavy-handed and occasionally funny scenes that emphasize its "literal destruction hiding figurative self-destruction” theme, like when Gyllenhaal's emotionally checked-out character randomly walks onto a construction site and asks to help the workers smash everything in sight. Like the aforementioned Southpaw, though, Demolition gets away with numerous storytelling missteps purely on the strength of Gyllenhaal's leading-man commitment. As the deeply scarred Davis Mitchell, he's both powerfully explosive and heartbreakingly vulnerable. He leaves your critical resolve far more broken than any decimated inanimate object that's seen on screen.

For everyone else, this aggressively bonkers action orgy will be the equivalent of a cinematic Molotov cocktail dressed in a birthday present's wrapping paper. Directed and “written” (as if there’s even a script involved) by Russian music video helmer turned novice big-screen madman Ilya Naishuller, Hardcore Henry is being sold as the first-ever all-POV action movie; shot using GoPro cameras and drones, it's a 90-minute first-person-shooter video game insanely transformed into live-action. The viewer is Henry, an enigmatic super-soldier who wakes up in a high-tech medical facility, is greeted by his wife/doctor (played by Haley Bennett), and quickly thrust into a nonstop marathon of strip club gunfights, aerial combat, warehouse gunfights, top-speed car chases, parking lot gunfights, and other kinds of gunfights once she’s kidnapped by an albino villain who doesn’t chew up scenery so much as snort it.

And through it all, Naishuller pulls no punches—he's too busy beating the shit out of his seemingly indestructible GoPro cameras. Imagine if Call of Duty had sex with Gareth Evans' The Raid: Redemption and you'll have a fairly good idea of what to expect. Under other circumstances, Hardcore Henry could be written off as a one-note gimmick, but Naishuller's too audaciously ballsy and wickedly inventive to allow any such instant dismissals of Hardcore Henry. Even as this deliriously overboard film becomes repetitive in its first-person carnage, its bravura filmmaking continually inspires awes, particularly an automotive chase on an open highway in which Henry, among other daredevil-level stunts, drops a grenade into a sunroof, rides the explosion’s fiery wave in mid-air, and lands on the back of a baddie's zooming motorcycle, all in one edit-free take. The absurdity is endearing.

After one too many big city problems, Jude (Amber Heard) heads to the Hamptons home of her father (Christopher Walken), an over-the-hill crooner desperately charting his musical comeback. She soon recalls that spending time at home with her father presents its own particular set of challenges.

Writer-director Robert Edwards (Land of the Blind) perfectly captures the inner turmoil of an aspiring artist through his characterization of Jude and Robert, demonstrating that ambition isn't enough to get what you want. Amber Heard commands the screen as a charming singer-songwriter who temporarily retires her rose-colored glasses for rose-colored hair. —Ashley Havey [via the 2015 Tribeca Film Festival guide]

Where to see it: AMC Empire 25