Which roles rank as her most luminous/frightening? 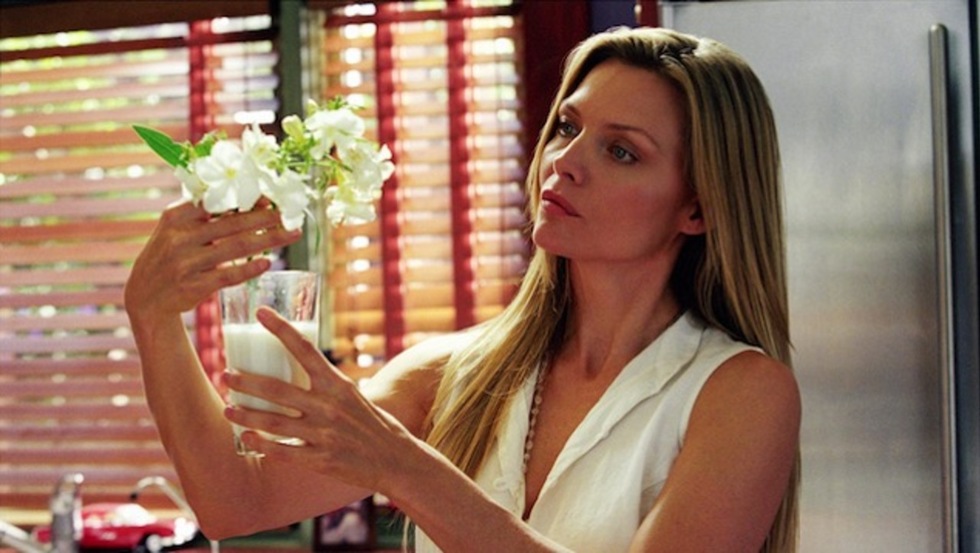 She’s back in theaters this week opposite Robert De Niro in Luc Besson’s The Family, which only serves to remind audiences that, at her best, Michelle Pfeiffer is the most terrifyingly gorgeous creature on the planet. She’s used this intimidating beauty to her advantage in a great many of her film roles, though there were of course times when she allowed herself to appear soft and demure. All lies, of course. This week, we’re ranking 18 of Pfeiffer’s most notable roles by how quintessentially the roles represent her as a being of ultimate and fearsome radiance.

18. Tally Atwater in Up Close and Personal: While this reporter eventually finds a spine of steel -- because Robert Redford loved her -- she never comes close to truly terrifying.

17. Madame de Tourvel in Dangerous Liaisons: Playing the fly in John Malkovich and Glenn Close's spider web certainly played on Pfeiffer's ability to play vulnerable, but she never turned the corner and used that beauty to its full, frightening effect.

16. Lea in Cheri: While loving up on the youthful, vain Rupert Friend certainly makes Lea the envy of everybody in Stephen Frears' film, she never taps into her terrifying-beauty trademark.

15. Sukie Ridgemont in The Witches of Eastwick: It takes a long while and a lot of time spent watching Sukie be a bookish wallflower, but once the titular witches realize their witchiness, Pfeiffer's mousiness brushes up against something more powerful.

14. Stephanie in Grease 2: Lord knows I wouldn't want to mess with a Pink Lady, but Stephanie's beauty is more playfully bad than truly terrifying.

13. Beth in The Deep End of the Ocean: The desperation of a mother who thinks she's found her long-lost son puts Pfeiffer into some intense places, but her beauty is so intentionally toned-down and her actions are so family-oriented that nothing rises to that Pfeiffer standard.

12. Countess Ellen Olenska in The Age of Innocence: Only if you count the ability to draw a man of respectability and means to stray from his intended bride and give in to passion as a tactic of gorgeous terror.

11. Angela de Marco in Married to the Mob: It takes toughness to stand up to the Mafia, but toughness isn't the same thing as terrifying beauty.

10. Louanne Johnson in Dangerous Minds: This was a movie that played very consciously with how disarming Pfeiffer's good looks can be. Her students totally underestimate her, even when she says she was a Marine. Their mistake.

9. Elvira Hancock in Scarface: The gangster's moll character doesn't give Pfieffer much room terrify, but you always get the sense she's more dangerous than she's letting on.

8. Susie Diamond in The Fabulous Baker Boys: It's all relative, of course. There's no real "danger" when Susie Diamond is singing "Making Whoopee" atop that piano. But the way she's wielding her considerable sensuality, it sure feels like someone's in trouble.

7. Titania in A Midsummer Night's Dream: A faerie queen is basically everything Pfeiffer had been building her career towards.

6. Lamia in Stardust: An evil queen is basically everything Pfeiffer had been building her career towards.

5. Velma Von Tussle in Hairspray: The Legend of Miss Baltimore Crabs looms large. Velma is more of a harpy than an actual terrifying beauty, but she certainly wields her WASP-y power for no good.

3. Elizabeth Collins Stoddard in Dark Shadows: Take all of Pfeiffer's terrifying beauty and then make her a vampire's scion? Done.

2. Ingrid Magnussen in White Oleander: In many ways, this is the quintessential Pfeiffer role. The story even makes a point to note that Ingrid used her beauty in order to bend people to her will.

1. Catwoman in Batman Returns: Probably the most terrifying of all these characters, in terms of her outright villainy. The best part of Pfieffer's characterization is that she's willing to sacrifice her beauty in order to better contort herself into Selina Kyle's Catwoman. And that only serves to make her MORE beautiful.