The artists covered here on TribecaFilm.com are all legit, but so are the lesser-known folks who are creating that coverage. Quietly, the people behind the stories, images &amp; videos we share are telling some of NYC's coolest stories. Here, get to know one of our talented contributors. 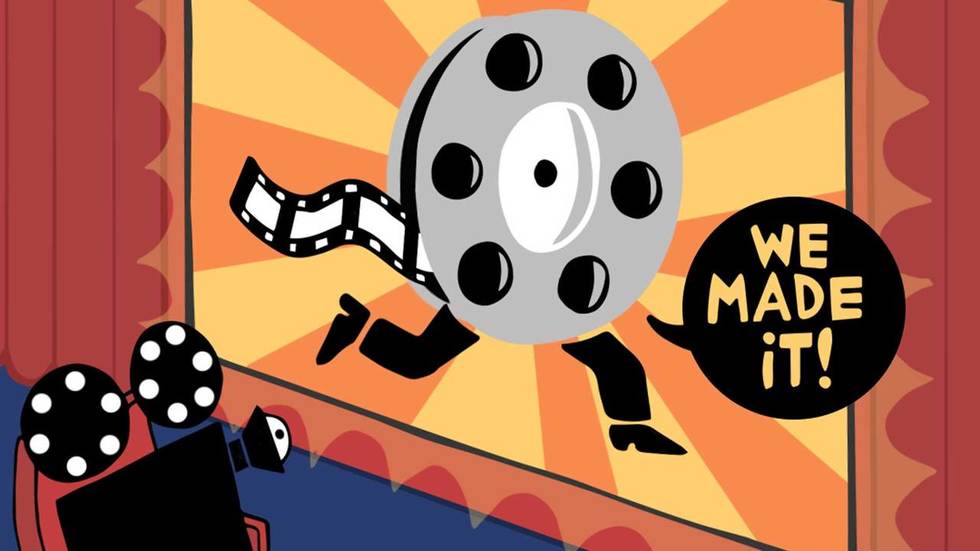 Our contributing artist Max Schieble, a.k.a. Elbows, is a storyteller in every sense of the word. An illustrator, musician, avid movie-watcher and New York City-phile, Max creates vibrant and humorous illustrations that we have been a fan of for a while now.

We're working with Max to create exciting visual stories to share with you on our social media platforms and our website. Get to know more about Max's process and inspiration below.

This is a #preview of some interstellar stuff I've got coming for #spacecaptainband. Look – it's a chase!
A photo posted by Max Schieble // Elbows (@schiebles) on Jan 26, 2015 at 4:58pm PST

A signature element in your illustration seems to be the legs on objects. How did that style come about?


The legs on objects is something that I've been doing since I was younger. It started with furniture. I did a short cartoon series called "Sit!" that was just different chairs and tables having these commonplace discussions, or arguing, or one breaking up with the other. I've always thought it was funny, the idea of objects talking to each other, as if they were people.

When I was a little kid I thought that everything had feelings, whether it was a toy, or a chair, or a tree. I could never bring myself to throw anything away, afraid that I would make the thing sad. Or, if we were at the candy store, or a gas station, I could never choose which candy I wanted because I didn't want to hurt the other candy's feelings. I imagine it came from that.

What are some of your favorite films and why?

I'm a big fan of Woody Allen, and Wes Anderson, and Hitchcock, and Goddard. I particularly love Hannah and Her Sisters, from Woody, and Vertigo, from Hitchcock. Each one of those directors has such a definable, stylized aesthetic, and has developed their own creative worlds. That's the goal, to me. I watch a lot of film noir as well, stuff from the 1940s and '50s. And for whatever reason, I also love James Bond movies! It's not so much the newer ones (except Casino Royale. That one I love. I once watched that one three times in one day.), but the ones from the '60s I love! The old ones would have this satirical undertone throughout the whole film that makes them pretty funny.

Does your illustration inform your work as a musician and vice versa, or are the two distinct?

They're the same to me. They very much go together; it's all expression. I remember once my aunt asked me – it was a terrible question – she said, Max, if you had to pick between either visual art or music, which would you choose? To me, there's no difference. The projects that I'm working toward incorporate multiple art forms. I've got my first solo visual exhibit opening in January, for which I also created a musical score. Then I'm finishing up my first full-length album for later in 2016, and that's accompanied by a illustration book, and a short film. That's how I'd like everything to be: here's the painting, that goes with that song, that goes with that chair you're sitting in.

What are you visually drawn to most? Are there repeating themes in your work that you are most interested in exploring?


The obvious stuff is furniture, and arms and legs, and polka dots. Though the dots have sort of disappeared in the last year. At this point they feel implied. Thematically, I tend to focus on people, and the multiplicity of the self. That ends up looking like figures with multiple faces, and bodies popping out of bodies. Almost like full-bodied Russian nesting dolls. It was an unconscious progression, but over the last bunch of years I became interested in how there can be many different versions of a person within one body. How sometimes, if you skip lunch, you turn into a totally different person and end up treating people differently than you would have, had you enjoyed a hearty mid-day meal. But beyond just there being the Mad You, the Happy You, the Sad You, I'm interested in the levels of openness that exist as you delve within a person.

What do you love most about NYC?


Let's see, what I love most about New York. The whole city just feels like a movie set. I probably feel that way having watched all these Woody Allen films growing up. But, especially in Manhattan, everything just feels like a film set. The architecture in particular can be very stimulating for the creative process. Back before I was as busy as I am now, I used to spend a lot of nights roaming around the city, just writing songs in my head, coming up with images, and videos I wanted to shoot. That was sort of a prerequisite to where I'm at now; now I don't do any of that, but I came up with so many ideas at the time that I'm still just pulling from that stock.


So, I guess I love the buildings. And the chairs. There's some great-looking chairs in this city.

Max Schieble, AKA Elbows, is a Brooklyn-based artist and storyteller, creating through illustration and design, as well as songwriting and production. Working simultaneously in visual and sonic mediums, he strives to develop narratives that unfold and connect through the different art forms, informing each other and expanding on individual stories. His work has been exhibited in Chelsea's Lyons Wier gallery, Brooklyn's IMAGE Gallery, and in-print within Quiet Lunch Magazine. In 2016 he will open his first solo exhibition (January 8 through February 3 at IMAGE Gallery) and release his first album.