The Internet is full of unabashed cat lovers and finally there is a film just for them! We sat down with ‘Lil Bub &amp; Friendz’ directors Juliette Eisner and Andy Capper to talk about the feline’s place in pop culture, and of course, Lil’ Bub. 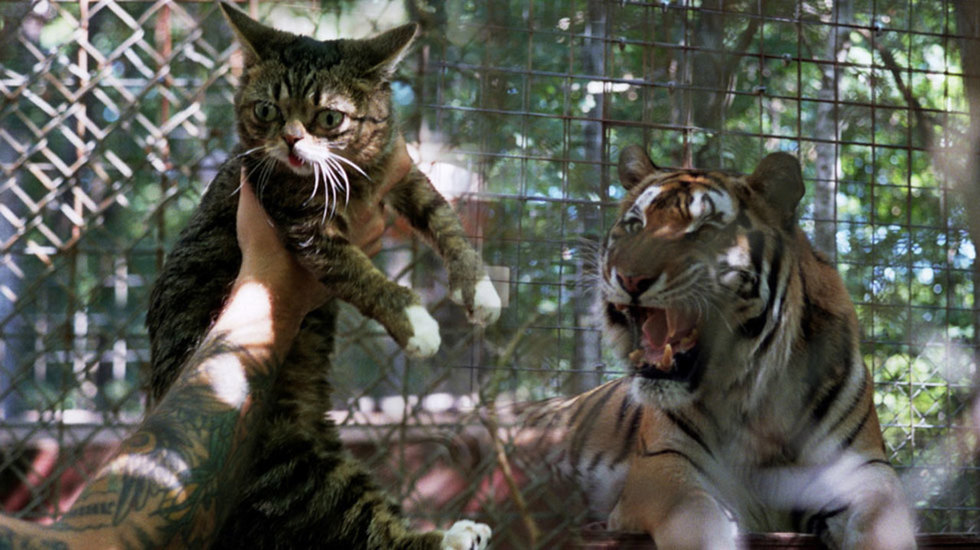 Tribeca: Tell us a little about Lil Bub & Friendz. What inspired you to tell this story? There are so many famous cats out there…why did you choose to focus on Lil Bub in particular?

Juliette Eisner: We actually approached Mike Bridavsky, the owner of Lil’ Bub, about traveling with Vice to the Minneapolis Internet Cat Festival to shoot some footage for our site. We initially wanted to make a nice ten-minute doc for our website.

Andy Capper: I was reluctant at first, but I went along thinking that the cat phenomenon is something we should investigate.  We decided to get a mic and see how people would interact with Lil’ Bub.

We had a magical first meeting with Lil’ Bub who gives off a zen quality. The more I looked at the cat and heard the stories behind about it, the more I wanted to make a new feature. I decided that this would be my next film right in that room. It was the cat that provided the inspiration.

Juliette Eisner: It’s a very special cat, and its story is a great way to explore this the obsession with cats that so many people share. The Bub story and everything that’s still going on with the cat—it’s just really compelling to me.

Tribeca:  You feature the creme-de-la-creme of the internet cats: Grumpy Cat, Keyboard Cat, and others.

AC: That’s what we wanted. We wanted the A-list.

Tribeca: Everyone was willing to be a part of the documentary when you approached them?

JE: Yeah, there hasn’t really been anything like this before, specifically on cats. I think people are used to the Internet and the avenues it opens for documenting their lives. The internet really has changed culture, and people were very open to us filming them.

AC: The people were all pushing the boundaries, and experimenting with new ways of portraying human stories and animal stories using different means of communication. They were very receptive to our idea of a traditional film about internet cat videos.

Tribeca: Grumpy Cat’s owner, Tabby Bundesen, dubbed her cat, “the newest anti-depressant,” and that was obviously true. What in the psychology of cat lovers and their owners draws them to the Internet?

AC: When you’re sad, cats are wonderful therapy. People like them because they comfort them, make cute noises, and do funny stuff. So when people are feeling depressed, they can click on cat videos and immediately feel better. That’s the reason why Lil’ Bub is so popular.

I believe that YouTube flourished because TV was getting more and more scripted. What’s less scripted than a cat jumping into a cardboard box? People can’t predict that. But I also think that they like the way the cats make them feel.

Tribeca: It was crazy to see the Beiber-like fervor when people would encounter Lil’ Bub on the street.

She really does have an effect on you when you meet her.

Tribeca: And Lil Bub’s owner Mike Bridavsky has gotten a nice bit of fame. So what was his original reaction to your request to make this feature documentary that focused a lot on Lil Bub?

JE: Well he was already well into the “my cat’s famous” thing when we approached him. He had been on Good Morning America, and that’s when I first called him up.  I think he’s always been careful about how much traveling the cat can do, how much activity the cat can tolerate. He’s a really good owner, but he was cool with us, and we got along well right off the bat. I think that helped it out a lot. He was very involved in making the film and had definite ideas about what should be included.

Tribeca: I was surprised about how much of his life was on camera, and how Lil' Bub is really his savior.

JE: Definitely. The film is as much the story of Mike Bridavsky as it is of Lil' Bub. He has two jobs at the moment, one is managing his cat and one is running this recording studio.  I think the cat might take up more time than running the studio.

Tribeca:  I didn’t know that there was such a thing as a meme manager until you featured Ben Lashes. Did you realize at the beginning of this project how much money there was to be made with these cats?

AC: We started to realize the money-making potential when we started talking to these people. I think the Nyan Cat is the most lucrative. It’s basically the new “Hello, Kitty” isn’t it? When we asked Nyan Cat’s owner, about the money, and he was quick to say, “That’s not what we’re all about.” He did give thirty grand to charity; they plan to double that next year. So if you’ve got thirty grand to give to charity, how much money have you made?

AC: But Mike and Lil’ Bub represent what I think Grumpy Cat should be going for at this point. That’s a cat crying out for a sponsorship with Frisky’s. Nyan Cat and Lil’ Bub are coining it, but their owners are giving money to charities and Mike is also investing in the DIY indie rock world.

Tribeca: Were you guys cat lovers before you entered into the world of Lil' Bub?

AC: Absolutely. I left my cat in London and I don’t like to think about it. But Lil’ Bub looks a little bit like my cat. I’ve projected a lot of my own feelings into this movie.

Tribeca: Well, one of the most real moments in the film is your meeting Lil' Bub for the first time.

JE: She really does have an effect on you when you meet her. She’s that cute.

Tribeca: And there were many, many cute cats. I really enjoyed Pudge, a cat that I had never heard of but that turned out to be one of my favorite cats in the film.

AC: Pudge is a reluctant star.

Tribeca: Yeah. There’s sort of a sadness behind his eyes.

AC: Real sadness, that’s what I got from Pudge.

Tribeca: I know! Before I saw your film, I was not aware of cat-prejudice. Pudge is a pure-bred.

AC: It’s the Internet. People prefer imperfect cats like Lil’ Bub and send hate mail to Pudge’s owner because her cat is a pure-bread.

JE: The juxtaposition of the two cats is interesting.

This film is really a post-Warhol film examination of fame.

Tribeca: One of the most interesting figures you interview is Grant Mayland, Minneapolis’ #1 Internet Cat Video Fan.

AC: We included him because, to me, he is the Internet. He’s a kid who was raised on it. His mother signed him up on AOL when he was fourteen or fifteen, and he has been on the computer ever since.

JE: Grant has loved cats since he was little, and now he is no longer a nerd because cats are mainstream and cats are cool. It’s awesome to like cats now.

Tribeca: What are you most looking forward to at Tribeca this year?

JE: I’m excited for Bub to be in the Drive-in festival, which is going to be the open screening in downtown Manhattan. That’s simply because the capacity is five thousand, and I want everyone to see the movie and to see their reactions.

JE: [laughs] We just want to see people’s reactions. We were just laughing the entire time that we were working on the film, and we hope that everyone is going to laugh with us. Plus, we think the drive-in on 4/20 is the perfect combination.

AC: We did show the film in London to our offices and there was so much oohing and aahing.

Tribeca: It is true that you can’t really watch the film with a straight-face.

AC: People can fake the applause at the end, but they can’t fake the “Ooohs! Ahhhs!” To see people reacting to the film is the best part of the project.

JE: I don’t think there’s ever been another movie in a festival about such a famous, cute cat.  It will be 100% enjoyed by every single person that sees it.

AC: It is like a live action Pixar movie.

JE: It’s an hour’s-worth of the cutest internet cat videos.

Lil' Bub & Friendz screens this Saturday, April 20, on the last night of the Tribeca Drive-in®, co-sponsored by AT & T and JetBlue. For more information, visit our film guide.