From Harlem to the Louvre with Artist Kehinde Wiley 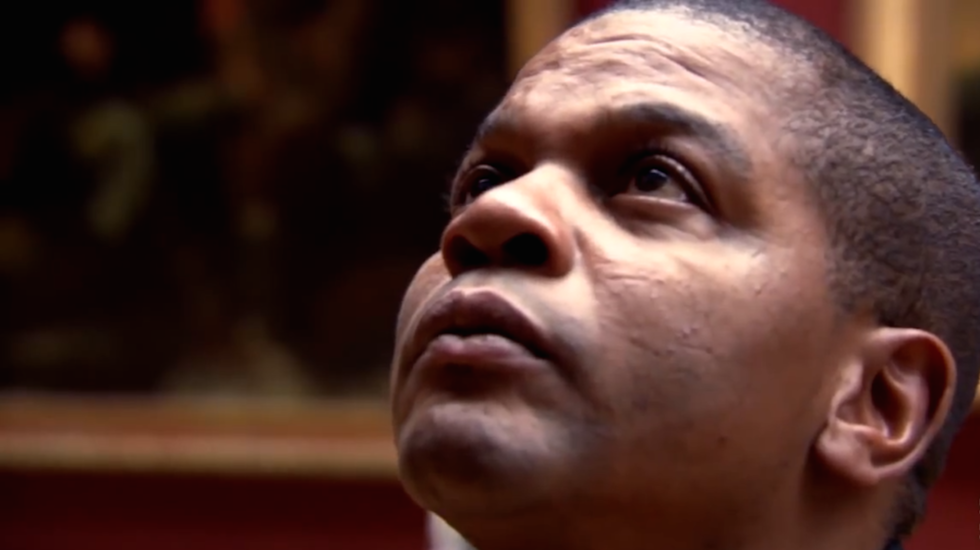 In the 2012 Marina Abramovic: The Artist is Present, producer and co-director Jeff Dupre showed quiet, no-frills scenes of people staring into the eyes of iconic performance artist Marina Abramovic across a table in the Guggenheim Museum in New York. Spurred by the occasion of a massive retrospective, the documentary revealed how Abramovic’s life-work blur, in the artist’s words, her “many Marinas.”

Now, Dupre directs Kehinde Wiley: An Economy of Grace, an equally theatrical film about another celebrity artist, Kehinde Wiley. Wiley is known for his gigantic paintings of young black men, most of them posed head to toe in urban brands amid loud, ornate 18th century-inspired decorative motifs. He creates the sort of works that you’d imagine plastered on the walls of an eccentric Wes Anderson character.

In 2012, Wiley decided to shake things up and paint a series of African American women. He selected as models people he found on the streets of New York— young women with children, attitude, day jobs. He commissioned couture gowns for them by Riccardo Tisci of Givenchy, photographed them and unveiled the oversize paintings (produced by an army of artists in Beijing) at a wine-and-mingling opening at a Chelsea Gallery.

Dupre and producer Jessica Chermayeff of Show of Force were there throughout this project, filming in Harlem, Beijing and in a gorgeous, wild scene in the galleries of the Louvre that were closed by request for Wiley and crew to experience classical paintings with nary a tourist to disturb. Kehinde Wiley: An Economy of Grace, now showing at SXSW (where it just won the Jury award for Best Documentary Short) before its fall debut on PBS, is a vibrant, earnest and audacious film about an elite artist who, despite his fame, remains charmingly unpretentious.

Tribeca: Jeff, you were producer of The Artist is Present and director on this: what’s the transition like?

Jeff Dupre: It’s funny…my titles are always different on different films, but I feel like I’m always doing the same thing, which means orchestrating a lot of very talented people. It’s very different with feature films where the dividing line is very clear. With documentary, you don’t know what the story is going to be; it’s unfolding before your eyes.

Jessica Chermayeff: I suppose with some documentaries, there’s someone very clearly directing. We interviewed Kehinde about five times and had almost two-hour interviews. He said so much and it was intellectually dense material to deal with. Our editor Ana Veselic was absolutely crucial in helping us to decipher what he was saying and how it was relevant to what we wanted to do.

JD: As a producer, Jess spent many nights and weekends in the edit room with Ana, carefully constructing scenes that were very challenging. She has a huge imprint on this film as a creative visionary.

Regardless of whether he’s wearing a bespoke suit and walking along with three whippets, Kehinde is inclusive and playful. People just like him.

Tribeca: Some of the most vivid scenes are on the street when Kehinde is casting for models.

JD: It was the most fun for us. We shot in Harlem and Brooklyn and Queens and, similar to Kehinde’s process , it’s all about chance and spontaneity. It was very fun to run around with Kehinde.

JC: We didn’t know totally to what extent we were going to involve the girls because they hadn’t been cast yet. We realized quickly, though, that their lives were bringing a lot to the process.

Tribeca: Was the camera a challenge for the women?

JD: This is America where everybody suspects that they’re going to be the subject of a reality show at some point.

JC: And I think the camera helps legitimize you. It’s a broadcast camera, which made it clear that he wasn’t some random lunatic coming up to them…

JD: …in a bespoke suit. It was really fun to watch the girls respond to Kehinde and realize, when he showed them his books that, oh, this is not some cheesy little project. These are amazing paintings. They kind of make your hair stand on end.

Did Kehinde collaborate on the vision of the film?

JD: The only thing he weighed in on was when we were talking about his work broadly. He did have ideas about which paintings he would like to show. Other than that, he liked the way we were telling the story.

Tribeca: Was there any diva behavior?

JD: Of course, Kehinde is a diva in his own way.

Tribeca: Was the dynamic similar when working with Marina Abramovic?

JD: Well, Marina is someone who is completely fearless and would say, “oh, I’m deathly ill and vomiting. Come over and bring the camera.” Kehinde was not like that. We could not go in at 6am in the morning and film him waking up in the morning. That was not his thing. Marina gave us the keys to her apartment on the first day of shooting and trusted us. Kehinde trusted us, but he was a little more guarded and, I would say, sane about it. I would be the same. Just as with Marina, we were showing how there’s no division between his work and his life.

Tribeca: The soundtrack is fantastic—from the Nina Simone opening to some almost playful, classical tracks.

JD: For a long time, we were using contemporary music from music libraries. It was such a nightmare because it was so hard not to make it feel like some cheesy reality show or a hip hop-inflected music. It felt like, “here’s a film about some black artist and we have hip hop music to reinforce that point!” So we brought on board Nathan Halpern, who scored Abramovic, and his music really elevated the film and pulled it together.

JC: Nathan did a really great job of bridging the gap between the art in the Louvre and the much more contemporary feel, which is what Kehinde’s work is. Nathan managed to bring in hip-hop influences but his music still felt in tune with the very tasteful and high art world. Regardless of whether he’s wearing a bespoke suit and walking along with three whippets, Kehinde is inclusive and playful. People just like him.

Tribeca: How challenging was it to show art in a satisfying, authentic way?

JC: The paintings in Kehinde’s “Down” series— of the men lying down, one where the young man looks like Christ—are 15-20-feet long. Most of those paintings are now in private collections or not being displayed, but it was important for us to show them.

This is America where everybody suspects that they’re going to be the subject of a reality show at some point.

JD: We did some movie magic. It was a cool trick that we deployed where we went, filmed an empty gallery, and then an animator inserted the paintings into the room. So it’s a shot of a real room with a real person standing there, but there’s a painting inserted into it.

Tribeca: And you guys got to film in the Louvre, run around in there when it was closed!

JD: I have to say, it’s kind of like once you fly first class, it’s hard to go back to coach. Once you have the Louvre to yourself…I mean, there was the Mona Lisa with no one standing in front of her. It was a huge privilege.

Tribeca: In Beijing, Wiley talks about the painstaking process of the painting and how the final week is the slowest.

JD: It’s very similar to making a movie, when you’re down to the wire, time freezes and it’s excruciating. Every little decision seems to tip the balance of the film wildly in one direction or the other. Like, oh my god, it’s unwatchable!

Kehinde Wiley: An Economy of Grace screens one more time at SXSW this Saturday, March 15, at 11:00AM. If you're not in Austin, you can watch the doc on PBS this Fall.