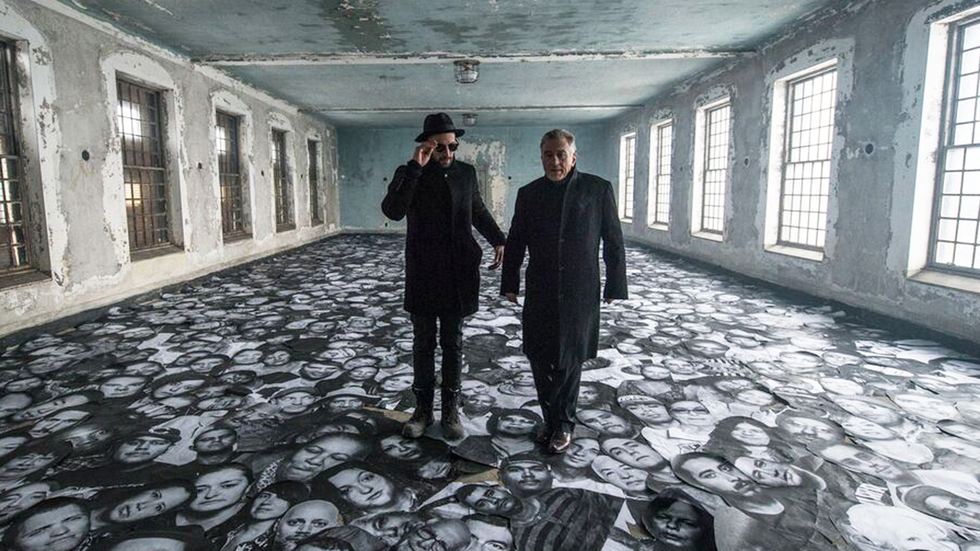 Ellis, a new film by JR, is the latest installment from an artist whose work shares the personal histories of individuals whose stories otherwise might not be told. The fourteen-minute film, which is accompanied by a book titled The Ghosts of Ellis Island, previewed on October 4 at The New Yorker Film Festival, proceeding a discussion between JR and Françoise Mouly, art editor at The New Yorker.

“It’s human to see where you are and what’s around you,” JR said to Mouly and those in attendance at the packed Gramercy Theatre. Written by Academy Award winner Eric Roth and starring Academy Award winner Robert De Niro, Ellis tells the elusive story of countless immigrants whose pursuit of a new life led them to Ellis Island. More broadly, the film also references the thousands of individuals today who continue to migrate in search of a better life despite uncertainty and life-threatening risks.

The discussion focused mostly on Ellis in relation to JR’s earlier work, such as Portrait of a Generation, a public installation of large-scale, black-and-white portraits of the residents of Les Bosquets, a housing project outside Paris where riots erupted in 2005. JR’s film Les Bosquets, which documents the pastings and includes a ballet performed by Lil Buck, premiered at TFF in 2015. And in 2011, as a recipient of the TED Prize, JR launched Inside Out, a large-scale participatory art project that invited individuals around the globe to submit a digital portrait to be printed for free and pasted publicly in the location of their choosing. Viewed collectively, JR’s projects around the globe reference contemporary events and enable people to tell their own stories through public installations of portraits, and, most recently, film.

In Ellis, De Niro narrates and stars as one of the migrants whose pursuit of a new life expired at the now-shuttered Ellis Island Immigrant Hospital. Following its opening in 1902, approximately 1.2 million people passed through the facility, where the Statue of Liberty can be seen from the windows. Upon arrival, some travelers were approved, but many, due to illness or simply fatigue, were denied access and hospitalized. Languishing in a sort of purgatory awaiting their fate, many were never discharged.

Shot on location, the film shows De Niro deliberately traversing the abandoned hospital complex, accompanied by fellow ghosts of Ellis Island in the form of portraits pasted to the walls, windows and doors in JR’s signature black-and-white style. Collectively comprising an installation titled Unframed, the pictures are made from archival photographs of immigrants, patients, and hospital staff. Unlike the large-scale portraits that JR has pasted elsewhere, some of which cover entire multi-storied buildings, the images as seen in Ellis are more intimate and diminutive. “The walls had so much history that I wanted the images to be smaller,” JR explained, adding that some of the most beautiful walls were deliberately left bare. The film’s detailed close-up shots of the hospital walls is similar to JR’s practice of depicting human subjects at close range, posed directly in front of the camera.

“As an artist I never calculate the impact these images will have,” JR admitted. But the truth is, the portraits do pack a powerful punch. The artist described an encounter with a woman who became emotional after recognizing her father in one of the images, a portrait of a group of doctors operating on a patient. “Sometimes,” he said, “you do connect with reality.”

Following its closing in 1954, the dilapidated facility was inaccessible to the public until just a year ago. Now, as part of a program developed by Save Ellis Island, Inc., visitors can take guided 90-minute tours of the facility containing JR’s installation, with proceeds going to the restoration of buildings on the island. “You walk in and feel a presence,” JR said. “You actually imagine what it meant for people to leave everything they had.”

In the film, De Niro’s voiceover narration describes his character’s arrival to the island, and then, after being denied entrance to the United States, hiding from authorities with a woman who had met the same fate. In one scene De Niro traverses a room, his narration describing “people of every color, shape, and size.” Viewed from above, the floor he walks on is pasted with hundreds of faces, each a portrait of an undocumented individual living in the United States.

A view from above is worth mentioning as a notable theme that runs through JR’s work. Various projects are meant to be viewed aerially, such as his installation for the New York City Ballet. “I wanted to make a piece you could only see from above,” he explained. “The best point of view was from the cheapest seats.” JR often shares photos on social media that depict himself on rooftops, scouting locations and otherwise taking in the city from an alternate vantage point. “Each time I’m on a roof and I see the city from that angle,” he explained, “I feel like I am getting a better understanding.” He is also known to install images on the tops of buildings; as part of the project Women are Heroes, he installed images on the tops of dwellings in Rio de Janeiro and Kenya, adding a philanthropic element by using vinyl rather than traditional paper to cover (and reinforce) the roofs.

Over the years, JR’s art has served as a witness to various societal and generational changes. Wrinkles of the City, for example, represents how constant demolition and reconstruction permanently changes the physicality and collective consciousness of urban landscapes like Shanghai and Los Angeles. Pasted portraits of elderly citizens immortalizes the final generation old enough to recall cities that have been altered, although, as JR noted with a laugh, “in LA it was hard to find wrinkles.”

Other projects contain a more overt political message. In 2009, following Switzerland’s successful referendum to ban the construction of mosque prayer towers, the artist pasted a huge image of a minaret on a towered building. And with Inside Out, which enables anyone to acquire a printed image to paste at the location of their choice, participants can use the project for their own commentary. Last year in Pakistan, for instance, a massive portrait of a young girl whose parents were killed in a drone strike appeared face-up in a field, clearly visible to aircrafts flying overhead.

“Can art save the world?” Mouly asked JR.

“I don’t know if it can,” he replied, “but it might change people’s perception.”

Intentionally or not, much of JR’s latest work references the contemporary status of migration.

Live eyes in Toronto ! People are walking inside Campbell house and look into a hole so they can be seen by the thousands of people passing by... #ioptoronto
A video posted by @jr on Oct 4, 2015 at 12:50am PDT

At the beginning of October in Toronto, he introduced a video installation that projects the eyes of individuals who wish to emigrate to Canada but have been denied. According to the artist, another instance involved a container vessel emblazoned with an image from Women are Heroes, which recently responded to a distress signal at sea and ended up rescuing a group of migrants from a small boat.

“When we shot [Ellis], the crisis hadn’t reached its peak,” JR explained to Mouly and the audience, referring to the thousands of refugees from the Middle East, Africa, and surrounding areas currently attempting to reach Europe and other parts of the world. Nonetheless, the film’s panorama of New York’s skyline as it appears today serves as an articulate reminder of the countless individuals throughout history and of the contemporary moment who seek freedom from persecution and poverty, abandoning their homes and families for a chance at a better, if uncertain, future.

The final scene of Ellis fades out with a shot of De Niro walking away from the camera toward the water. Silhouetted against a gray sky and falling snow, his character is as striking as one of the solitary wanderers found in paintings by Caspar David Friedrich. “I am the ghost of all those who never got to go there,” the poignant narration continues, “and those who will never get there.”