Sure, everyone loves the holiday classics, but if claymation isn't your thing, check out this underrated holiday movie. 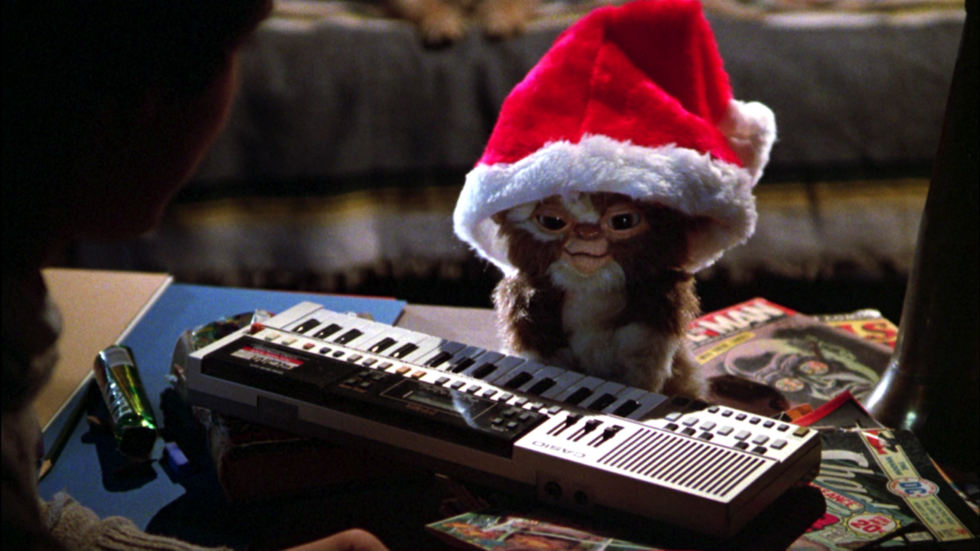 Rule 1: Keep them out of direct light.

Rule 2: Don't give them water, not even to drink.

Rule 3: And most importantly, do NOT feed them after midnight.

If you're thinking this sounds more like the set up to a horror/thriller flick, you're right. 1984's Gremlins smashed ideas of what holiday movies were supposed to be.

Why is Gremlins such a great holiday movie?

Christmas movies are notoriously cheesy. Produced by Steven Spielberg, Gremlins recognizes this cheese and bakes a casserole with it. In one scene, the melancholic Kate (Phoebe Cates) has a monologue about why she hates Christmas—turns out her dad dressed as Santa one year, got trapped in the chimney and died. "And that's how I found out there was no Santa Claus," she says as the camera cuts to Gizmo the very shocked Mogwai. Poor Gizmo just found out there's no Santa, too. Another scene has the gremlins gathered in the theater watching Snow White & the Seven Dwarfs as they chime in on the famous work song. The genius of Gremlins is that it doesn't take itself seriously. It has a ridiculous premise, but embraces its over-the-top-ness.

Speaking of songs, do you remember the Gremlins theme? The movie's score managed to be creepy and catchy at the same time. I find myself humming it in the dark as I look over my shoulder. Jerry Goldsmith conducted and produced the scores for six Star Trek productions, including TNG, Voyager, and the first Star Trek feature film. His Gremlins theme is instantly recognizable.

Look at itty-bitty Corey Feldman! He's adorable as the stupid kid that makes the gremlins multiply the first time. Judge Reinhold plays another one of those posh jerks he became famous for in the 80s, and Phoebe Cates is a melodramatic Kate, but Zach Galligan's sincere Billy Peltzer is who you stay for. Bright-eyed and naïve, he'd make an easy hero, if it weren't for the movie's true star, Gizmo. Gizmo, voiced by Howie Mandel, is shy and polite, though the plucky Mogwai toughens up when his friends are in danger. He ties a bandana around his head (à la Rambo) and hits the gas on his pink Barbie-sized Corvette.

As much fun as Gremlins is, it also has a strong anti-colonialism theme. Billy's father essentially steals Gizmo (a Mogwai becomes a Gremlin if you disobey Rule 3) while traveling because he thinks the creature would make an awesome gift for his kid. Because Billy Peltzer—or anyone else for that matter—doesn't know how to take care of it/treat it, the situation gets out of hand and they can no longer control the Gremlins. After the townspeople and the gremlins battle it out, Mr. Wing arrives to take Gizmo back, telling Mr. Peltzer that he had no business taking him in the first place. Nothing like a side of truth to balance of Christmas dinner, amiright?