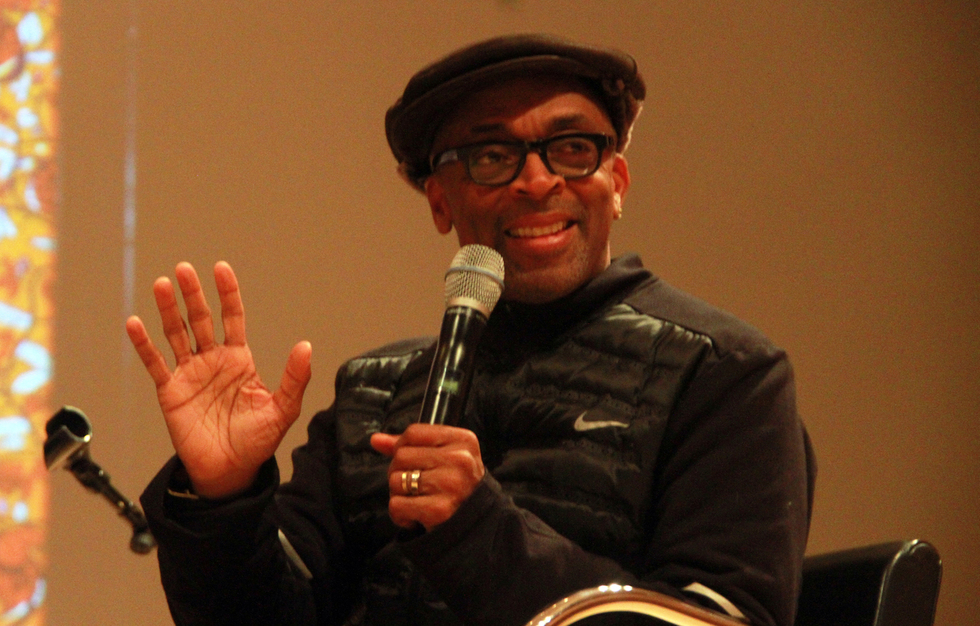 Kehinde Wiley knew he’d be a crappy gang member from the start. Growing up in South Central Los Angeles, menacing sects like the Bloods and Crips were all around him. But he was focused on art. “I would've been the saddest little Crip,” the classical-meets-contemporary painter joked Thursday evening during a three-way Q&A with acclaimed filmmaker Spike Lee and illustrator Tatyana Fazlalizadeh.

“'Raise up!’" Wiley yelped, mocking his own high pitched young voice as he spoofed a robbery.

That was just one of the many comedic moments at the Brooklyn Museum last night during the latest edition of their In Conversation series. Borough native Spike Lee, relaxed in a black Nike top and high top silver Air Jordan sneakers, was promoting his new film Da Sweet Blood of Jesus (out today).  Fazlalizadeh, street-chic in black blazer, jeans and matching stilettos, came in heralded for her social commentary works on sexual harassment via her Stop Telling Women to Smile project.  And 10 years after debuting his work at the Brooklyn Museum, Wiley returns with his latest exhibition, Kehinde Wiley: A New Republic, which opens February 20.

Lee played graphic scenes from Jesus  which was filmed in part at the Brooklyn Museum and features artworks by Wiley and Fazlalizadeh, in addition to telling stories about his classic films and dropping tips about what interferes with the creative process (Don’t chase awards or recognition, folks!). But there were other noteworthy revelations from the trio. Here are five.

While pacing a downtown Brooklyn block in front of  Aloft Hotel and waiting to meet with a Blood of Jesus actor, Lee came across one of Fazlalizadeh’s pictures plastered on the side of a building. Spike Instagrammed the image.

Poster On A Downtown Brooklyn Building

And once his followers told him it was Tatyana’s, he then asked her to “call  [Lee’s production company] 40 Acres In Brooklyn Monday, please.” They’d eventually meet. Lee bought $5,000 worth of her pieces and 18 months later, they’re collaborators. The works are featured in Jesus.

Kehinde’s Nervous About His Upcoming Exhibit:

Surprisingly, the veteran artist still gets antsy on the eve of his latest works going public. Why? "It's like your kids,” he explained, “You send them out into the world and hope they do well.” New Republic is a departure for Wiley, who is known for featuring young African American men in his paintings. This time women are making their way into his project- something he has never done before. Wiley revealed he was never inspired to draw women and his critics taunting him to do so did not help either. But once he freed himself of that pressure and viewed the idea through the lens of the conversation, it was a go. The film, Kehinde Wiley: An Economy of Grace documents the process Wiley underwent to create his first series of portraits of African-American women.

Da Sweet Blood of Jesus Was Financed through Kickstarter:

Unlike a conventional big-budget film, Lee’s latest movie was funded by crowd-sourcing site Kickstarter. Spike’s students at the Tisch School of the Arts at NYU told him about the funding opportunity. He recalls, “They said, “Professor Lee, you should think about Kickstarter.’ I had to make sure I got the money. Failure is not an option.” His 30-day goal was a lofty $1.25 million. Though he was nervous in the campaign’s final days, he’d eventually reach his goal and then some.

Wiley’s oil paintings are prominently featured on Fox’s new hip-hop drama Empire. The young, though mega successful show starring Terrence Howard and Taraji P. Henson is an exaggerated portrayal of the music business and Kehinde adores it. "I think it's really cool,” he said. “I just thought it was a really sexy idea. Like a Dallas, real over-the-top. And not taking everything too seriously. I love that type of stuff.”

“Raise Your Hands If You’ve Been Harassed”:

That’s what Spike Lee asked women in the audience to do after a Fazlalizadeh image of three women on a Baltimore brick wall captioned "Harassing women does not prove your masculinity”  was displayed. To no one’s surprise, nearly every female hand in attendance rose high. “Yeah,” Tatyana responded, not at all amused. “It's a real thing. I'm not making this up.” The conversation heated up a bit when Spike asked for Tatyana’s thoughts on 10 Hours of Walking in NYC as a Woman, a video clip that went viral last fall which displays only men of color harassing a white woman as she walks the streets on NYC. “The video didn’t cut it,” Fazlalizadeh responded simply. Spike then jumped in to damn the footage and its omission of white harassers.  "How do you shoot for 10 motherfucking hours and only get black men,” Lee wondered aloud. “That's shenanigans!"