The ‘Zero Motivation’ star recalls the excitement of this year’s Festival and the joy of working with the talented writer/director Tayla Lavie. 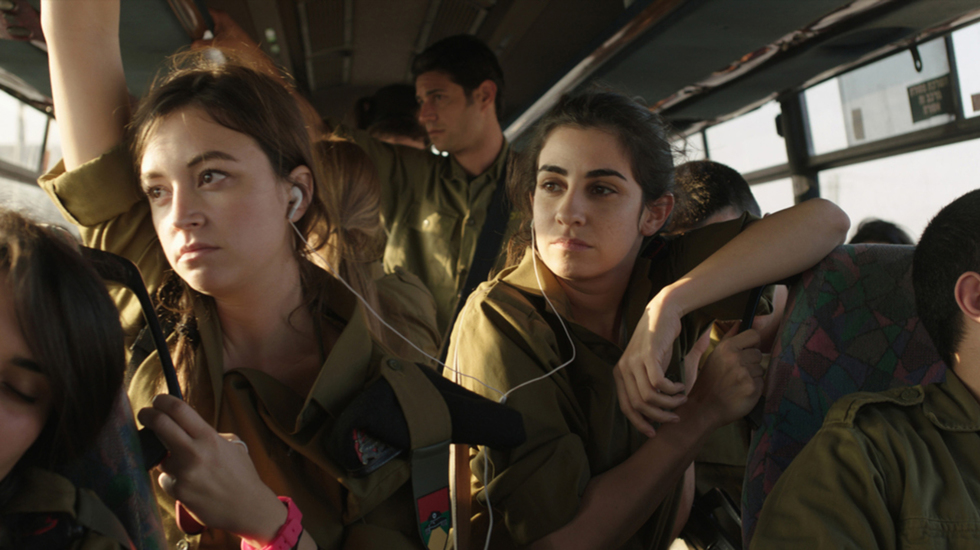 Who would have thought that an Israeli military comedy would be the toast of the 2014 Tribeca Film Festival? Tayla Lavie’s Zero Motivation (now playing at Film Forum) won both the Best Narrative Feature and the Nora Ephron Prize (for writer/director Lavie) confirming that comedy is indeed universal. The film provides a darkly humorous (and often zany) look at the lives of young, female Israeli soldiers as they perform their military service through perfunctory office work at a remote desert base. The women deal with army life by forming friendships and alliances that help relieve their boredom and sense of isolation.

Actress Dana Ivgy is a stand out as Zohar, a surly and rebellious soldier who would rather do anything (like lose her virginity) than perform her military duties. We talked with Ivgy about working on the film, Lavie’s unique style and why time is a luxury.

Tribeca: Zero Motivation won the Best Narrative Feature prize at TFF 2014. Can you talk about your experience at the Festival?

Dana Ivgy: It was great. I hadn’t seen the film before we premiered at Tribeca, so I was pretty stressed out, but excited. The film details a very specific Israeli experience, which we weren’t sure would translate to audiences in New York. I was so shocked that people understood the jokes and overall vibe of the film and were laughing! It was such a nice feeling. People came up to us from all over the world because we were with Zero Motivation. It was wild!

We didn’t really expect to win anything. Of course, we thought that would be nice, but you never know and you never want to get your hopes up. Sometimes when there’s an award ceremony coming up, people will call and make sure you’re attending the event if you’ve won something. That didn’t happen with Tribeca [laughs] so we just showed up to the Awards Night. We were all thrilled for Tayla [Lavie] when she won the Nora Ephron Prize. That’s when we started drinking [laughs]. When the presenters started to announce the winner for Best Narrative Feature and began to describe our film, I turned to Tayla and said, “That’s us!” She was like “no, no” and kept on drinking [laughs]. It was just such a great night. I loved every minute of it.

Tayla’s such an individual. I know I’ll never work with another director who is anything like her.

Tribeca: Do you remember your first reaction to Zero Motivation when you read the script?

DI: I do. I’ve known Tayla for a long time. I actually acted in her thesis project when we were both in school. I fell in love with her script, but there was no money because it was a student film. I received push back from advisors who didn’t want me to be involved, but I didn’t care [laughs]. Tayla was clearly very talented and I wanted to be a part of her project. I remember we shot her student film on weekends. It was so crazy and different, and since then, I’ve always wanted to work with her again.

When she sent me the script for Zero Motivation, she told me to look at the role of the Commander. Tayla thought it could be funny if I played that character.  It had been10 years since we first worked together, and I was 28, not 18 like when we first met. I read the role and finally said to Tayla, “I can be anything, but I’m not a commander.” We laughed and then she said to me, “I’m happy to inform you that you still look 18.” So I read the part of Zohar and it felt really natural to both of us.

I’m so glad it all worked out too. I read the script and just loved it. I really admire the way Tayla’s head works. She’s just so sharp and funny—both of which really come across in the film.

Tribeca: I found Zohar to be incredibly blunt and frustrating, but at the same time, completely loveable and relatable. Can you elaborate on what drew you to the role?

DI: Zohar just seemed second-nature to me. She was almost a continuation of the first character I ever played for Tayla. I just loved that natural progression. I was also drawn to the friendship between Zohar and Daffi (played by Nelly Tagar). I felt a real connection there.

Tribeca: The film begins and ends with its focus on the friendship between Zohar and Daffi. Can you talk about working with Nelly Tagar? Did Talya Lavie help the two of you establish that friendship bond via rehearsals?

DI: We did have a lot of rehearsals [laughs]. It was great for me. Tayla created so many great characters, which meant there were a lot of actors. We only had 24 days to shoot the movie, so everyone needed to come to set prepared. It was a very tight schedule. Nelly and I had never worked together before, but we got along from the minute we met and read together. She’s a very warm person and turns everyone around her into family. Tayla also put Nelly and me in the same room at the hotel and made sure we did as many things as possible together during the rehearsal period. It was so helpful and fun at the same time! We formed a real friendship.

Tribeca: How would you describe Talya Lavie as a director?

DI: There’s just something about her. Tayla’s a great filmmaker who approaches cinema in such a unique way. What I love most about her is her humor. When Tayla’s giving you direction on set, she always a little bit snarky, which I appreciate. She brings you into her head and makes you feel very special. Tayla’s such an individual. I know I’ll never work with another director who is anything like her.

Plus, Tayla’s incredible power with words, which is evident in her screenwriting, also comes through when she gives direction on set. She just has to say one word for you to immediately get what she’s going for in the scene. It’s uncanny. You never expect what is going to come out of her mouth, which makes working with her really exciting.

From the time I read the script to the day we finished shooting, it had been three years.

Tribeca: Do you know how long it took her to make Zero Motivation?

DI: I don’t know how many years it took her to write the script, but I know she just pours everything into her work. From the time I read the script to the day we finished shooting, it had been three years. Sometimes, it takes a really long time to get funding for a film. I’m so glad it all worked out. Tayla had a specific vision in her head, and it was wonderful to help her bring it to life.

Tribeca: It sounds like you all had an incredible experience making this movie.

DI: Most of the characters I’ve gotten to play before Zohar were all very dramatic, sad characters. I never had a chance to do comedy before, which was both fun and scary at the same time [laughs]. I loved playing Zohar so much. I tried to talk Tayla into making a series of movies with the character. I’m still trying [laughs]. I think it would be so fun.

Tribeca: Was there a scene that was particularly challenging for you to shoot?

DI: I think the biggest challenge was how little time we had on set. Everything was packed so tightly into those 24 days that there was really no room for error. We couldn’t have very many takes, so we all had to be really focused.

Given all that, the most challenging scene for me to shoot was when Zohar has two huge metal trays filled with full cups of coffee and rolls that she transports to a staff meeting using her desk chair [laughs]. The trays were so heavy! I was terrified of dropping them before the character was supposed to in the scene.  We did a few takes of me rolling with the trays, but only one of me dropping the trays on the ground. It was difficult, but fun. It’s a new skill I can say I acquired!