Chloé Zhao breathes new life into one of American cinema's most timeworn genres. 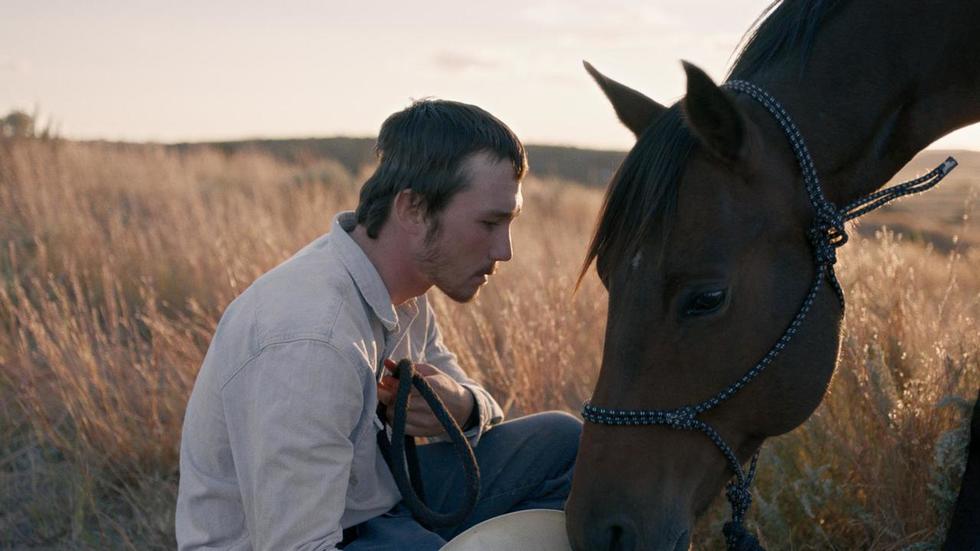 After wrapping production on her 2015 feature narrative debut, Songs My Brother Taught Me, writer-director Chloé Zhao returned in 2016 to hang out in South Dakota’s Pine Ridge Reservation, which served as the setting for her well-received drama about the ties that bind a yearning Lakota Sioux man to his cherished younger sister. During a visit to a local ranch, Zhao met and quickly befriended Brady Jandreau, a soft-eyed, self-effacing former rodeo star who was working as a hired hand ever since a near-fatal accident in the ring put an abrupt end to his riding career in April of that same year. The 20-year-old Jandreau began confiding the agonizing details of his months-long recovery to Zhao who by August had adapted his tales into a 55-page shooting script. By September, just five months after Jandreau’s initial injury, Zhao was filming his story with a tiny crew and an ensemble of nonprofessional actors led by Jandreau himself, using the actual locales and living spaces in which her leading man’s physical and spiritual battle was still being fought.

The result is The Rider, a startling and ineffably stirring experience unlike almost anything attempted in American movies today. Zhao’s sophomore effort was one of the rare titles at last year’s Cannes Film Festival to receive an almost uniformly rapturous reception upon its unveiling; when stopped on the steps of the Palais following the film’s out-of-competition premiere, as part of Directors’ Fortnight, Werner Herzog remarked to critic Tim Robey, “Just when you think cinema is entering a phase of stagnation, out of nowhere, along comes a film like that. It’s very encouraging.” Such praise is far from uncommon amid the contained clamor of the festival circuit, but nearly a year afters it debut The Rider continues to hold up gorgeously. Zhao has crafted a practically impeccable picture whose understated blurring of fact and fiction makes it immune to the easy genre parameters that only serve to reduce films to their most saleable components. Instead, Zhao quietly implores us to consider her creation on the lone but mighty merits of its filmmaking craftsmanship and narrative thrust, composing pure cinematic poetry in frame after frame.

Jandreau plays Brady Blackburn, a faintly-altered avatar of the real man, a young Lakota bronco rider whose ascendancy in the rodeo rounds is cut short after being thrown and trampled by a horse during a competition, resulting in a fractured skull that calls his once-auspicious career into question. The film opens in the aftermath of this calamity as Zhao focuses with sobering, stomach-turning concentration on Brady unwrapping his blood-stained head bandages underneath the fluorescent lights of his grimy home bathroom then using a pocket knife to pull out the staples that secure the new metal plate in his head. In this introductory sequence, Zhao and DP Joshua James Richards (who also shot Songs and lent a modest, mud-caked majesty to Francis Lee’s gay romance God’s Own Country) skillfully depict bodily trauma with a sensorial, first-person immediacy that infuses the entire feature. Neither Zhao nor Richards ever leaves Brady’s side; the camera moves whenever and wherever he does. Zhao frequently invites us into Brady’s most private moments of vulnerability, allowing us to witness the full scope of his precarious recuperation. His left hand regularly clenches in seizure. He vomits day and night. Yet in spite of his doctor’s explicit orders, Brady is aching to get back in the saddle and resume the riding days that he refuses to believe are over.

With this setback, Zhao effectively sets the stage for a life-or-death redemption story of expansive visual scope and impeccable specificity, both regional and personal. The Rider charts a coherent, clear-cut narrative path that is colored in with figures from Jandreau’s world, almost all of them cast as their respective fictional counterparts. His mother long deceased, Brady serves as primary caretaker to an autistic sister (played by Jandreau’s sibling Lilly); together they share a small home with their frequently MIA father (Tim Jandreau), a hardened gambler and insouciant womanizer who casts no illusions about his sidelined son’s future riding prospects. Conversely, Brady’s good-time gang of all-male rodeo pals persist in feeding his desire to pick up where he left off, instructing him to “ride through the pain,” like all great cowboys do. Even Brady’s closest confidante, the now-quadriplegic, onetime bull-riding king Lane Scott (playing a variant of himself), encourages his friend, via one-handed sign language, not to give up the cowboy way that they each so reverently subscribe to.

To delve any deeper into the plot details of The Rider would be a betrayal of the distinctive pleasures to be found in this utterly idiosyncratic work. Like Andrew Haigh’s Lean on Pete and Valeska Grisebach’s Western, two additional man-and-horse dramas of equal mastery that debuted in 2017, the peaks of the film reside not in the propulsive beats of its spare, finely-tuned story, but in the impressionistic artistry of its director and her inspired collaborators, whose combined efforts express an exacting, interiorized battle on one of moviedom’s most infamous and expansive canvases: the parched, wide open spaces of the frontier. Many filmmakers have been cowed by the sheer size of this milieu and its mythology, but Zhao is a storyteller uniquely capable of balancing the macro with the micro. In capturing the grandeur and grit of prairie life, Zhao finds an adept behind-the camera partner in Richards. He is a cinematographer who understands the delicacy of natural light in huge vistas, as well as the febrile intensity that can be gained by inserting vivid flashes of burning blues and neon pinks into tight two-handers, like the one set in a truck bed as Brady drags on a spliff with a female friend, who herself proves to be one of our hero’s more judicious confidantes. Even in scenes as brief as this, the writer-director never loses sight of Brady’s internal struggle. She imbues scene after scene, and not just those of horse-riding and other forms of physical exertion, with a throat-tightening tension that foregrounds the potential danger of Brady’s do-or-die stubbornness and makes his headstrong drive excruciatingly palpable for the viewer.

Jandreau is far more than a mere object of fascination for Zhao. She has tailored his raw material with a keen interest in plainspoken verisimilitude, but allowed editor Alex O’Flinn’s cuts, which vary — like the film — between the classical and the modern, to shape the nitty-gritty particulars of Jandreau’s life into a lyrical whole. More than simply capturing the objects, events, and activities of Brady’s day-to-day existence, Zhao has managed to simultaneously evoke the emotional significance of these elements. Scenes of horse-whispering between Brady and his beloved, aging stallion are the film’s most immediately and ineffably poignant, but Zhao can also achieve an oblique intimacy when least expected. In an early fireside chat, the director holds tight on the isolated frames and faces of Brady and his buddies, each one shooting the shit about the cowboy way; they are solitary boys who have naturally banded together, their bond spoken and spiritual yet resistant to broaching the kind of interior sorrow that Brady occasionally lets us glimpse but so often bottles up.

Zhao’s proficiency with her troupe of first-time actors cannot be overstated. All of her performers exhibit an undiluted authenticity of feeling, from the elder Jandreau, who plays a concrete character and not the tired archetype of the fickle, tough-loving, and untrustworthy patriarch, to her magnificent male lead. Since Jandreau is effectively playing himself and the artistry of amateur actors is all too easy to overlook, this unexpected star’s extraordinary tour de force is unlikely to garner the full acclaim it merits. This is a pity because Jandreau, no matter the closeness to his own cinematic equivalent, brings this yearning, good-hearted soul to life with a virtuosic application of body, mind, and heart. He hits difficult emotional cues with a sublime self-assurance that has eluded thespians of far greater stature and experience. His hunched but durable back and concentrated, all-seeing gaze embody the profound idea that sweeps through Zhao’s masterpiece like the wind rustling the plains: there is honor to be found in choosing life over glory.