The filmmaking legend ventures to the bullet-ridden streets of Chicago for his strongest work in nearly a decade. 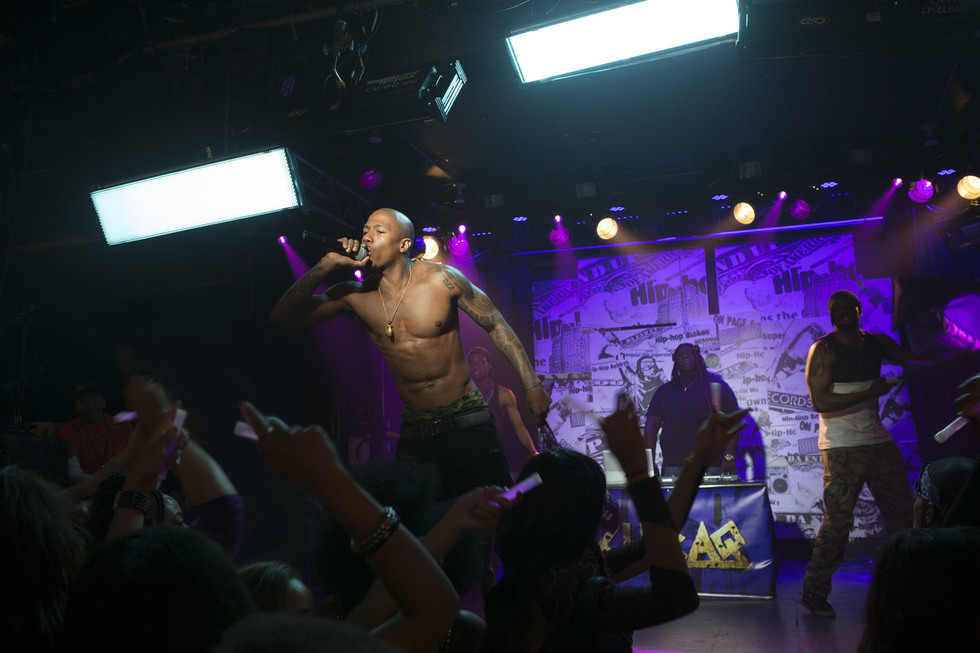 One of 2015's best movie sequences is also a contender for the year's most initially bizarre sights.

Angry, hilarious, and uniformly moving, Chi-Raq is Spike Lee's loose adaptation of the Greek play "Lysistrata," set in the gun-plagued Chicago but retaining the concept of women going on a sex strike to change their men's destructive ways. Lee cast John Cusack as Fr. Mike Corridan, the deeply passionate and naturally galvanizing lone white pastor in an all-black church—the character is based on the Windy City's real-life Rev. Michael Pfleger. When Cusack first enters the film, it's off-putting; aside from the acclaimed Love & Mercy, the actor's recent output has left him flirting with Nic Cage punchline territory. (See here.) Early into Chi-Raq, Corridan presides over the funeral of Patti, a pre-teen who's been killed by a stray bullet fired during gang warfare between the Spartans, led by rapper Demetrius "Chi-Raq" Dupree (Nick Cannon), and the Trojans, overseen by the eye-patch-clad Cyclops (Wesley Snipes). Corridan uses the tragedy as a lynchpin to deliver a fire-and-brimstone sermon condemning his city's rampant gun violence. Near combustion, he attacks the "reality TV urban murder shows" seen on the nighttime news by people in the suburbs; he blasts mass incarceration of young black men by calling it "the new Jim Crow." The scene goes on for about 10 minutes, and it's amazingly performed and devastatingly relevant.

Much like the entirety of Chi-Raq, Spike Lee's best narrative film since 2006's Inside Man and an incredibly necessary missive. The ever-ambitious director's previous films haven't been lacking in ideas, but they haven’t been centered enough around any central plans—Red Hook Summer (2012) buried its scathing indictment of religion beneath an uneven coming-of-age comedy, while Da Sweet Blood of Jesus (2015) blandly remade the underrated Ganja & Hess (1973) with inferior acting and a disastrously schizophrenic tone. Chi-Raq, though, finds Lee back in his confident School Daze/Do the Right Thing headspace. His mission is clear, and he attacks it with a powerful vigor that never wavers.

That objective is to, as Lee has stated in various interviews, "save lives." Chi-Raq addresses the horrors of inner city gunplay by emptying the rounds directly into the viewers' eyes. The film opens with a terrifying shootout amidst an overcrowded hip-hop concert, then quickly erupts with machine gun spray on a public street, and often transitions scenes with gunfire sound effects. Lee’s characters, including the fed-up elder Miss Helen (Angela Bassett) and the slain girl's mother (Jennifer Hudson), repeatedly decry their neighborhood’s violence through emphatic monologues, and maddening statistics—such as how Chicago's death tolls exceed those in Afghanistan—are shown on screen and voiced by Fr. Corridan. Lee's never been one for subtlety, and, in some ways, Chi-Raq is as pistol-to-the-face abrasive as Bamboozled.

Unlike that punishingly bleak 2000 film, however, Chi-Raq is also funny as hell. For the first time in ages, Lee figures out a way to accessibly preach his charged-up gospel. Honoring its “Lysistrata” origins, the film’s dialogue is almost entirely done in rhyme, and it's equal parts outlandish and witty: Chi-Raq fawns over his girlfriend, Lysistrata (Teyonah Parris, exceptional and revelatory), by saying, during intercourse, "Girl, you finer than granulated sugar," and, "You just like my credit: bad as fuck!" Samuel L. Jackson, somewhat reprising his Do the Right Thing role, coolly drops riotous one-liners as Dolmedes, the film's recurring one-man Greek chorus. And Lee's script, co-written with Kevin Willmott, doles out one wonderfully absurdist set-piece after another, like choreographed dance routine set to the Chi-Lites' steamy soul classic "Oh Girl" and a great cameo from Dave Chappelle as a strip club owner who goes on a tirade about how women have "literally shut down the penis power grid."

Lee pulls off a terrific high-wire act with Chi-Raq, see-sawing between heart-attack seriousness and some of the year's best comedy with the kind of filmmaking dexterity that once defined his reputation. In the end, he doesn't provide any tangible solutions for the "reality TV urban murder shows" or the NRA-minded firearm worship that produces those figurative shows. Chi-Raq's larger-than-life aesthetics stoke the fires as only cinema can—and moreover, as only Spike Lee can.