Even in her last effort, this fearless film pioneer remained as defiant as ever. 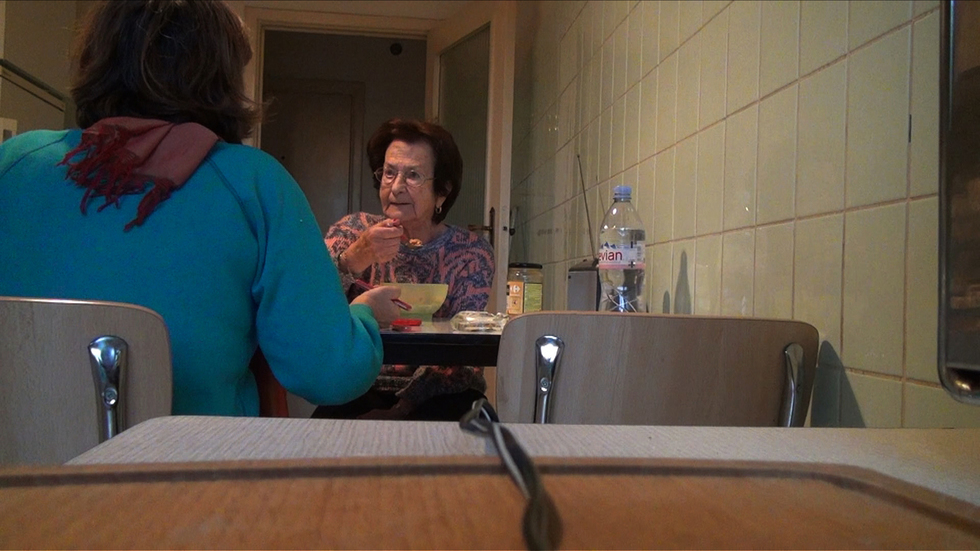 Chantal Akerman’s No Home Movie is, more than anything, an invitation into grief. But grief for what, exactly? Plenty of documentarians have opened up their family homes to expose spiky dynamics, unearthed histories, and untimely demises, often captured (or manufactured) with the sort of frank affection that makes these documentaries palatable to a ticket-buying public.

Akerman’s unsentimental swan song, a fiercely-loyal love letter to her late mother, skews and summons affection on its own terms. The film opens with a truly puzzling first impression: a coarse shot of a lanky treetop, blowing wildly amid an intense and strident wind within some no man’s land. Akerman stays with this willfully unpolished image far past the point of comfort, her camera unyielding. It’s the most volatile moment in a film wholly inclined towards quiet remembrance and placid lamentation. But the shot’s extension makes the abstraction grimly clear: This — this — is what it feels like to mourn inconsolably, when grief is a stranglehold you can’t wriggle away from.

Akerman’s moving but inscrutable motherly remembrance would be a piercing and demanding work of art in any context. But as seen through the lens of Akerman’s abrupt passing this past October, with the cruel knowledge that this is her final film, No Home Movie’s severe heartbreak becomes only more palpable, its sense of helpless, forthcoming solitude only more tragic.

In No Home Movie, Akerman pages through the final days of her mother Natalia, an Auschwitz survivor, shuttling us through various Skype calls and brief visits to her mother’s Belgium apartment, where we watch them eat, argue, and banter with one another. These touching scenes display the prickly tenderness and droll back-and-forth of a recognizable mother-daughter bond, which only makes it more dismaying when the film almost recedes into itself. Akerman retreats from familiarity as though figuratively mirroring Natalia’s descent into disease, holding empty shots of the apartment that seem to reveal nothing at all and unfold at the pace of a dying breath.

I still don’t know if No Home Movie is a great film per se, or even particularly great Akerman. Her groundbreaking feminist masterpieces (the frisky queer statement of Je, tu, il, elle; the canonical Jeanne Dielman, 23 Commerce Quay, 1080 Brussels) still throw an imposing shadow over her latter-day output, which were filled with risky adaptations (like the labyrinthine La captive, unreleased in America) and at least one drastically less-than-great instance of genre-breaking (A Couch in New York).

A powerful if not prodigious work, No Home Movie exists somewhere in the middle, even as one gets the sense that this is the only conceivable way this movie could have ever been made. For a subject so deeply ingrained with sorrow, the punishing and purposely tedious nature of No Home Movie’s structure feels entirely earned — even imperative — and certainly undeserving of the downright callous reception it received at Locarno, where it was reportedly booed during a press screening.

Akerman depicts a personal history through an emotional elusiveness that skirts thorough detail and feels warmly candid even when her home-life tableaus are at their most starkly, cyclically enigmatic, resembling near-still-life portraits of a world that stretches as far as a living room, but resides as deep as a mother’s love or a daughter’s devotion. No Home Movie doesn’t just grieve for a mother, but for the homes, spaces, and hearts that will never be filled the same way again. In this way, it is inevitably a ghost story and it captures a personal haunting so profoundly intangible that it risks isolating viewers, even when we can’t look away, evoking — through gesture and silence — a familial tie that cannot possibly be unbound. And it didn’t need to be a “fan-pleasing” masterpiece because, truthfully, Akerman never owed us a single fucking thing.

So many of today’s filmmakers have risen and soared on the back of Chantal Akerman without even knowing it. What an incomparable and unapologetic career. What a bold and magnificent cinematic pioneer.