Brie Larson Talks Growing Up and Branching Out in ROOM

The rising actress talks enacting a moving story of motherhood and survival for the big screen. 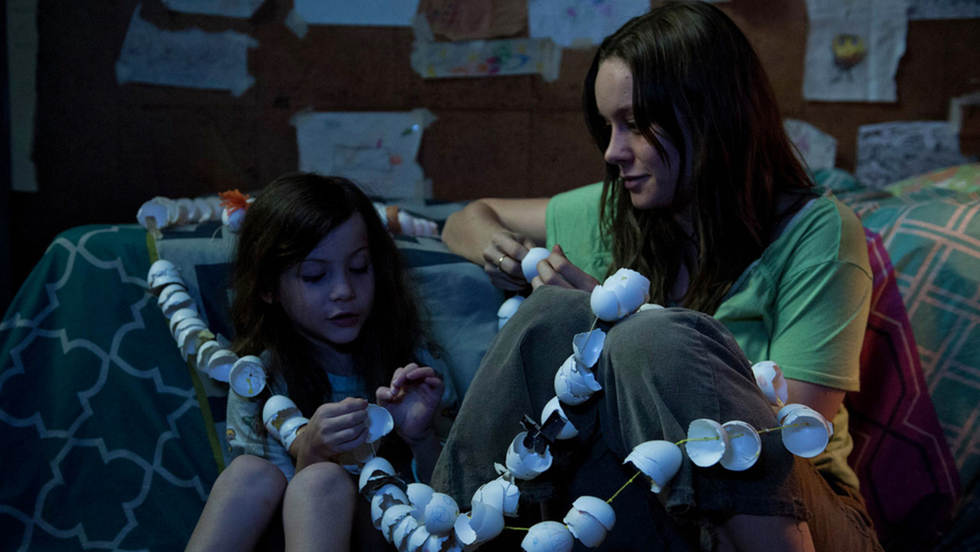 Photos by George Kraychyk / A24 Films

In her first lead role since breaking out in the 2013 indie Short Term 12, Brie Larson stars in Lenny Abrahamson's Room, a drama adapted from Emma Donoghue's New York Times-bestselling novel of the same name. In the film, Larson plays Joy Newsome aka "Ma," a woman who is held captive in a small garden shed she calls “Room” with her five-year-old son Jack (Jacob Tremblay). With Jack unaware of the world outside “Room,” Joy devises a dangerous plan to escape from their confines and from the man who put them there, prepared to do anything to give Jack the chance to live a normal life.

During an interview with Tribeca, Larson talked about approaching her role as a mother, bonding with nine-year-old co-star Tremblay, and why Room is ultimately a unique meditation on the process of growing up.

Portraying a mother on film is something fairly new for you. Since you’re not a mother in real life, how did you confront a role like this, especially with all the emotion there is between you and actor Jacob Tremblay?

I talked with my mom quite a bit about what it was like to go through pregnancy and to raise a child and knowing what to do initially. I think a lot of it comes from being compassionate. I think a mother’s heart grows so many sizes when she has a child. This child becomes like a floating piece of yourself that you can’t imagine living without and would do anything to protect. It wasn’t a far reach because I love this planet and humanity so much. It was easy to project that onto this beautiful little boy, played by Jacob, who is one of the greatest and most wonderful people I’ve ever met.

We had about three weeks of what we called “rehearsals,” but it was really an opportunity for the two of us to hang out and get to know each other. We would draw portraits of one another and play with Legos. We built the toys you see inside [the room] in Room. We spent a couple of hours every day just playing in [the room] in Room. It became a really safe, wonderful place for us. We were both alone in Toronto, so we spent a lot of time just goofing around. We’d play silly games or anything that got us to feel a sense of comfort with one another. More than anything, you have to be comfortable as an actor to really go for it. We really wanted Jacob to just feel like he was so loved and supported that he had the freedom to do what whatever he wanted to do with his character.

As I was watching the film, the room itself made me feel confined and very restless. How did you handle the space as an actress and did it ever get overwhelming?

No, because I think we really helped create that space. [The room] in Room never felt small. It felt like a very sacred place. It felt very special to us. That door [in the room] during filming could actually be open. It was never locked like it is in the story, so we did have the ability to leave. Because the space is so small, it did cut out any extra people that were on set. So, it would usually just be me, Jacob, our director, and a few core people it would take to record the scene properly. It wasn’t easy to get in and out a lot of the time because the door would be in the way or it would hit someone. It meant that you couldn’t bring your cell phone in and you had to be very respectful of the space and create a world that was very intimate and very loving.

When I say as a viewer I felt very confined, is that what you were hoping for?

Yeah, it’s so necessary to feel the confinement and the pain or feel the situation [Joy and Jack] are in. That’s the set up for them to escape. You have to feel that the space is so dire that it would have to make sense for them to attempt such a risky escape in order to have a better life. I think that it’s perfect that you felt that way. I think it is totally necessary.

Is there a message about parents and children in this film you hope comes across to audiences, whether it’s something that stems from Joy and Jack or Joy and her parents?

Yeah, I think [Room] is an allegory for growing up. I think we can all relate to being a kid and seeing the world very simply. Things are black and white, good and bad. You only see so much of the world. As you get older, and sometimes it happens to us, you have to grow up very quick. You get into a world that is bigger and more complex. I think we’re always for the rest of our lives going from one room to a bigger one, over and over again.

When did you realize you weren’t a child anymore?

[Laughs] That’s interesting. I don’t know if I feel like an adult. It’s tough to understand what being an adult really means. I think being a real adult still means that you have humor and playfulness, which is very childlike.

Do you envision where Joy and Jack are five years after the end of the film? Are they OK?

I really don’t think about those things. I wish them the best though. They are two people I really enjoyed spending almost a year with. I hope they are happy wherever they are.

Some people consider Short Term 12, which was my favorite film of 2013, as a breakout role for you. Did that role prove to you that you could carry a film yourself?

Well, quite simply it is like a document of me doing a lot of different things and playing a very complicated character. It’s different from playing a supporting role because you have more scenes and there is more you get to show. There is more time you get to have with the character, the person. It felt like I got to paint with more colors. The film itself is just so beautifully done. Everybody in the film is so good that we just created this beautiful package of wonderfulness that people really loved.

Do you confront an intimate film like Short Term 12 or Room in the same way you do with blockbuster films like your upcoming movie Kong: Skull Island or do you feel like a smaller cog in a machine when the project is that big?

So far, with Skull Island, I don’t feel like a cog in a machine and I haven’t noticed any difference, which I’m really happy to say. I didn’t know going into it what it was going to be like. I had never done anything of this scale before. I’m really lucky I’m doing a film with a group of people that really care about the story and the characters. It’s coming from an honest, truthful place. They have a deep love for mythology, as do I. I think the roots are really strong. So far, so good.