The Netflix and Chill Canon

Your foolproof guide for getting the most out of Netflix streaming's date night potential. 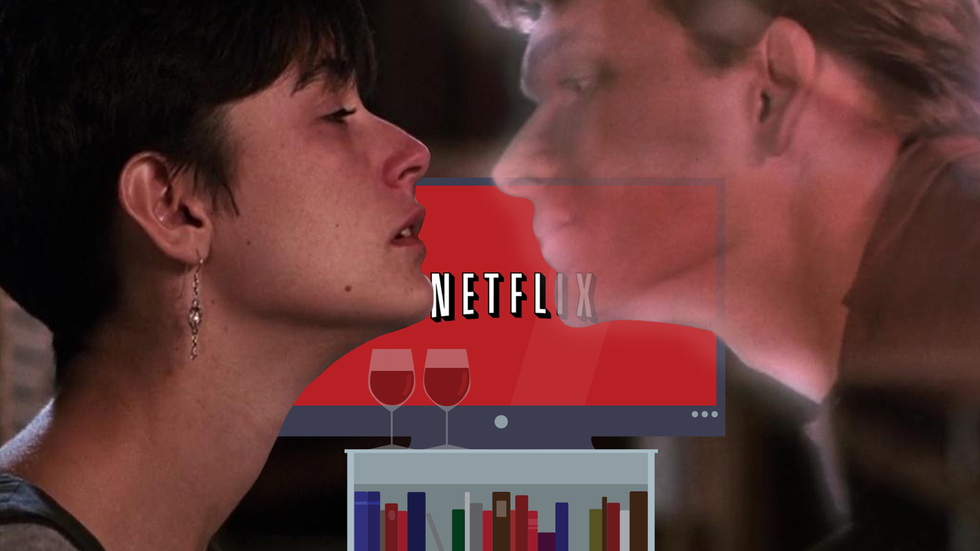 Here's the thing about the currently in-vogue "Netflix and chill" expression: really, any movie should work. Whichever Netflix movie is streaming while a couple, ahem, "chills" is beside the point.

In theory, "Netflix and chill" should be just as compatible with, say, Adam Sandler's awful The Cobbler as it is with There Will Be Blood, right? Actually, no, not at all. With the latter, Paul Thomas Anderson's sprawling historical masterpiece is too exceptional to simply have on in the background—within seconds, it hooks you and never lets go. There Will Be Blood exposes one of the difficulties with this whole "Netflix and chill" phenomenon: you don't want the movie to be, you know, great, lest it distracts you and your companion from the evening's all-important "chill" portion. But at the same time, something as bad as The Cobbler would be similarly problematic; nobody wants to be the person who suggests watching that terrible movie. It's basically self-sabotage.

Because somebody needs to be Netflix's unofficial Dr. Ruth, here are 10 movies streaming on Netflix that'll strike the perfect middle-ground between credibility and quality.


Da Sweet Blood of Jesus, Spike Lee's Kickstarter-backed remake of the underrated 1973 horror gem Ganja & Hess, is a fascinating study in cinematic failure. Everything about the movie is off, from its performances to its horribly pitched tone of eroticism and comedy. It's one of Lee's worst movies, but because it's a Spike Lee Joint, it's definitely worth a look, if only to consider how the iconic filmmaker's grandiose ambitions so often get the best of him. (See also: Miracle at St. Anna.)

In a few specific moments, however, Da Sweet Blood of Jesus does achieve Lee's desired level of sexiness, and it's in those scenes where this not-quite-about-vampires bloodsucker drama reaches its "Netflix and chill" sweet spots. The film's badness allows you and your partner to lose interest before its scattered bits of allure reel you back in enough to make its sexual yearning between its main characters—a pair of star-crossed lovers—seem enviable.


The justification here is simple: Barbarella and its star, Jane Fonda, are sexy as hell. While the movie itself is little more than B-cinema camp, it's replete with Fonda holding guns and kicking ass in a plethora of hardly-there space outfits. Imagine flipping through an intergalactic Victoria's Secret catalog for 90 minutes.

Fortunately with Barbarella, those Austin-Powers-"Randy!" feelings will kick in before the film’s opening credits are over. Barbarella famously begins with Fonda floating around while wearing a Versace-lite spacesuit, and then she starts disrobing until she’s spinning naked in mid-air. It's hot enough to get any sci-fi lover going.

The best way to experience Gaspar Noé's Enter the Void for the first time is, let's be real here, under the influence. Visually-stunning, next-level, and shot completely in first-person, it's a nearly three-hour cinematic LSD trip, and it's a truly remarkable piece of filmmaking.

To be fair, though, it's really all directorial technique and very little acting strength. As the afterlife-inhabiting protagonist, Nathaniel Brown is mostly a non-entity; as his troubled sister, Paz de la Huerta gives a drugged-out looking performance, which is to say, not a good one. So watching Enter the Void doesn't require you to pay attention as if it's a David Lynch film. You can just bask in its visual grandeur.

Meaning, it's tailor-made to be a kind of moving art installation that's coloring the room as you "Netflix and chill." The third act's risqué Tokyo "love hotel" sequence is not to be missed.


By the looks of it, Serena is a movie recommendation no-brainer. Who wouldn't watch a movie starring Jennifer Lawrence? Add Bradley Cooper as her love interest, realize that it's not the overrated wannabe-Scorsese flick American Hustle and that its romantic edge means it might be as good as Silver Linings Playbook, and the two of you are primed for some quality movie watching.

Quickly into Serena, you'll both see why the failed prestige drama's release was held back for so long, and why Lawrence and Cooper barely ever acknowledge its existence. It's a mopey period drama that strands its stars in an abyss of nothingness. Serena is, in two words, pure dullness.

Hopefully, though, by the time Serena has proven its inferiority, which is around the ten-minute mark, give or take, Lawrence's and Cooper's mutual hotness will have worked as an aphrodisiac. If not, well, Silver Linings Playbook is also streaming on Netflix.


Typically, any movie starring Kevin James would be a no-go when it comes to "Netflix and chill." The portly actor's juvenile brand of pratfall comedy might insult your significant other. Think about it—who wants to bump and grind while watching Paul Blart: Mall Cop?

Hitch, however, is the right balance of charming romance and feel-good laughs. James, for his part, manages to not shanghai the production and the intimate rapport between Will Smith and Eva Mendes will leave you and your partner feeling jealous of their chemistry. You'll want to be them.

Chances are, nobody will ever say the same about this guy.


The first test of the evening: ask your potential chill mate if he or she has ever seen Coming to America. If the answer is "no," promptly hang up the phone, consult Tinder, and find the next potential chill mate. Because going through life having never laughed at "The royal penis clean, your highness" is unacceptable, and says a lot about a person's limited character. Not knowing about Soul Glo is the same as hating children, or kissing like Lloyd Christmas—it's a deal-breaker.

But if you're fortunate enough to find someone who also loves Eddie Murphy’s undisputed comedy classic, you'll also have found someone who'll never turn down the opportunity to watch it again. And since you've both already seen Coming to America numerous times, it's the perfect kind of background noise. You can enjoy its presence in the room without having to pay much attention to it.


The same rule applies to Clueless: it's one of those timeless classics that should be required viewing for anyone who considers him or herself a comedy fan. It's arguably cinema's greatest representation of what life was like in the '90s, and loving it means quoting Cher Horowitz (Alicia Silverstone) verbatim and feeling better whenever it’s playing.

For guys, though, there's an added bonus that comes with suggesting Clueless on a "Netflix and chill" occasion: women love Clueless, and will award you all the brownie points for not only sharing their love for director Amy Heckerling's modernized Emma adaptation, but also for voluntarily wanting to revisit it with them.

To receive some extra credit, start rapping the words to "Rollin' with the Homies" before the movie begins. And don't forget to use Elton's wavy hand motion.


Sometimes, all it takes is one scene for a movie to reach Peak "Netflix and Chill" status. While looking through Netflix's streaming library, you aren't likely to find a better example than the pottery wheel sequence in Ghost.

Jerry Zucker's supernatural drama is actually a very good romance in and of itself, following the heartbroken Demi Moore as she reconnects with her murdered lover's (Patrick Swayze) unable-to-rest spirit.

Put it this way: if you haven't sealed the deal by the time the clay starts melting all over Moore's and Swayze's hands, you're more likely to see an actual ghost than score.