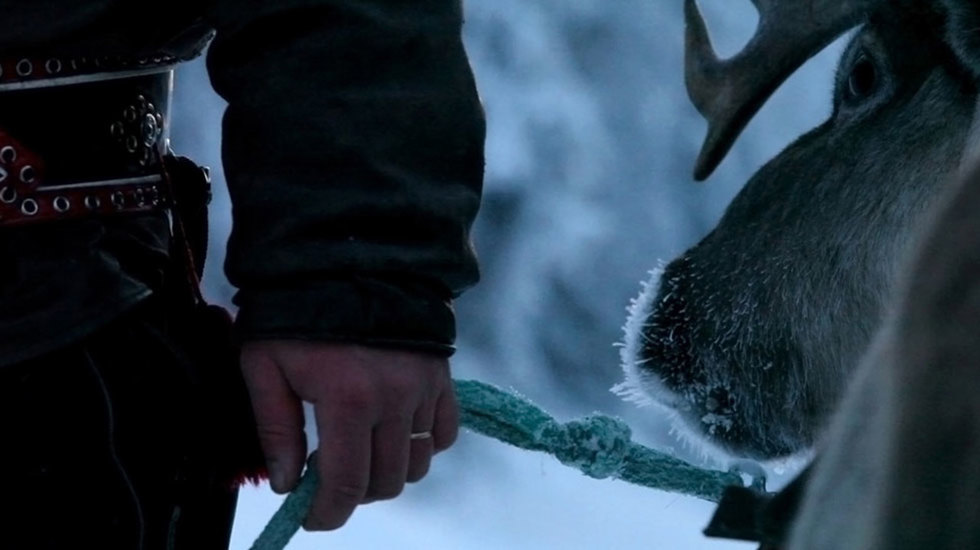 Tribeca: Tell us a little about Aatsinki: The Story of Arctic Cowboys. When did you first know you wanted to make a film about their way of life?

Jessica Oreck: I love old Westerns. The character of the cowboy is infinitely appealing to me. I love the idea of a man alone in a great expanse of space, in tune with the weather and the needs of his animals. I am talking about the kind of man who knows the stars and the landscape almost innately. He is separate from the driving rush of civilization. His time exists for daylight and moonlight. He doesn’t own a Blackberry.

I wanted to find that type of person – the modern equivalent of a Randolph Scott character. I started looking in 2009 but it wasn’t until 2010 that I found the main subjects of my film, brothers Aarne and Lasse Aatsinki. They truly are modern cowboys.

Tribeca: Out of many potential subjects, you choose the brothers Aarne and Lasse Aatsinki as your modern day cowboys. What drew you to the extraordinary lives of these two men and of their families?

JO: There are dozens of little details that are a part of casting. I was looking for men who, like I said, are tied to the land. But it was also critical that they come across a certain way on camera. So I needed men who would look good and be comfortable but still humble, and with whom I could convey a certain level of intimacy. And, of course, I had to find people who would be okay with me following them and their  families around for a year and being very much a part of their life.

The herders all seemed to understand Kickstarter pretty intuitively.

Tribeca: A documentary like Aatsinki: The Story of Arctic Cowboys can only come from someone who was fully immersed in the culture. Given the demands inherent in this kind of challenging project, how long did it take to get the film made?

JO: I spent about 9 months with these families over the course of a year and a half, and I really did fully immerse myself in their lives. I ate dinner with them most nights, babysat their kids, and pretty much stuck to them like glue. They taught me to sew, light a fire, chop wood, cook, train reindeer, and feed sheep. They all became my adopted family and my best friends.

Tribeca: Aatsinki: The Story of Arctic Cowboys is very much like a classic American frontier story. However, without technology, these cowboys would have trouble sustaining their way of life. Did you see any hesitation on the part of the cowboys to employ modern technology (like the snowmobiles) and even rely upon it in many ways?

JO: Part of what makes a cowboy a cowboy is that he doesn’t hesitate. The cowboy always knows the best way to get a job done and doesn’t quibble over decisions. The Aatsinkis always use the tools that are best suited to the task at hand, which means that sometimes they are lighting their pants on fire to burn a field and sometimes they are renting a helicopter to round up the herd.

It isn’t that they aren’t thinking about the environment, but they are trying to sustain a as much as they can of a way of life that has been passed down for many generations. Compromises must be made for them to continue to live with the herd.

Tribeca: Aatsinki: The Story of Arctic Cowboys provides a visual feast for the audience. What camera(s) did you use while making the film? Did you always intend to make nature itself an important character of the film?

JO: I used the Canon 5d Mark II. It was perfect for being able to fit (together with all my sound gear, water, and food for the day) on my back whether I was riding on a snowmobile or hiking across swamp.

All of my films are based in ethnobiology – exploring the way that human cultures interact with the natural world. So nature, in some form or another, is always a critical character in my films.

Tribeca: I can only imagine how tough the shooting conditions near the Arctic Circle must have been. Can you discuss some challenges that might not be so obvious to the viewer?

JO: I had nibbles of frostbite, and when my gear would break, there was no where to go to replace it. My batteries would die really quickly in the cold, so I kept them in my bra to try to keep them warm after they had been charged. The lenses would also ice and fog when we would move between inside and outside. And because I didn’t speak the language, I usually had no clue what was happening and had to be prepared for anything.

But for the most part, I loved it. I was always much, much colder than any of the herders (which they thought was quite comical), but they always took care of me and lent me gear to keep me dry and toasty. And Finns know how to get warm. Taking sauna was the best part of each day.

Tribeca: Have Aarne, Lasse, and their families seen the film? If so, what were their thoughts? Are they coming to the Festival?

JO: The Aatsinkis have seen the film. I did a screening for all of the herders when I finished the film last year. It was a kick. They don’t say a whole lot, but I think they liked it. I think they felt that it was true to their lifestyle, which was the most important thing to me.

Tribeca: You utilized Kickstarter to help complete your film. During the reward process, did you have to explain what the “rewards” were to the cowboys? Do you have any tips for filmmakers attempting to crowdfund their own movies?

JO: The herders all seemed to understand Kickstarter pretty intuitively. Even though they never asked about this, I wanted to be very careful about drawing a line in terms of the rewards. I didn’t want them to feel like I was taking their livelihood and marking it up for a U.S. audience. I wanted to be very clear about why I was trying to raise money and how it would be used, so they would know that I wasn’t trying to turn a profit.

Part of what makes a cowboy a cowboy is that he doesn’t hesitate.

JO: Aarne Aatsinki and Raisa Korpela (the stars of the film) are coming to NY for the premiere! They never dreamed that they would get to come here – they’ve never been in a really big city or even in a very tall building. I am very excited to turn the tables a little bit and show them the way that I live. And I can’t wait to share these incredible people with the audience.

Tribeca: What makes Aatsinki: The Story of Arctic Cowboys a Tribeca must-see?

JO: I think it is about as far away from New York as you can get. And the Cowboys will be there!!