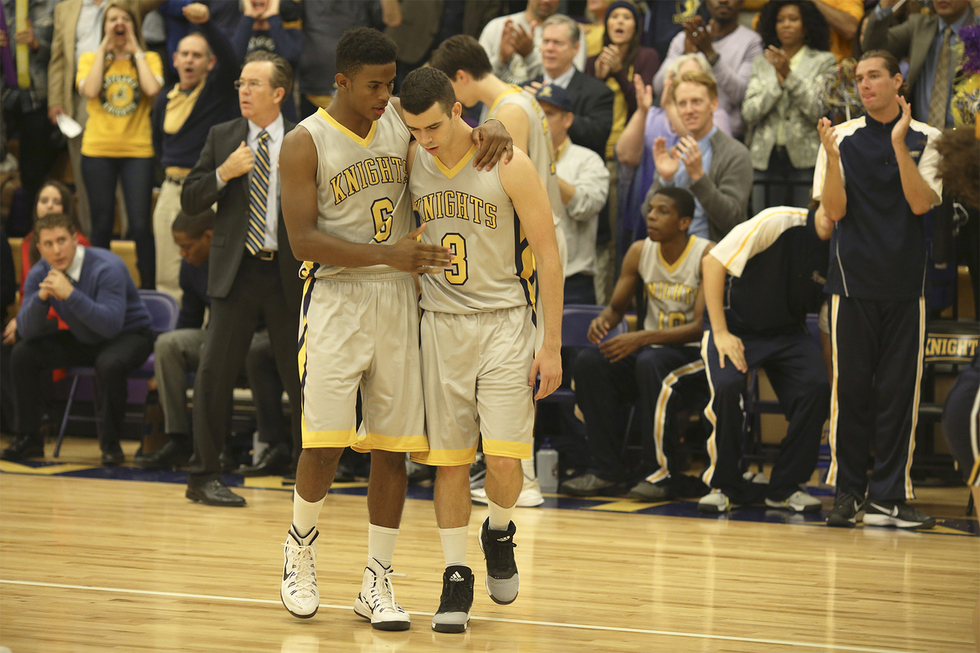 One of the most disturbing scenes ever mounted in any dramatic medium occurs early on in the second episode of the confident, compelling, and extraordinarily ambitious second season of ABC’s American Crime. It’s a moment to rival Game of Thrones’ Red Wedding, Mad Men’s harrowing office suicide, or any of American Horror Story’s heebie-jeebies shocks for sheer and utter disquiet. And the only thing onscreen is a single human face.

In the scene, Taylor (Connor Jessup), a morose teen whose sexual assault serves as the nervy center of this season’s network of stories, is getting briefed on the rape kit he is about to be administered after being drugged and defiled at a party thrown by his school’s basketball team a few weeks prior. The camera rests on Jessup’s face in static and unbroken close-up as an off-screen nurse breaks down the procedure. Her tone is unaffected and it calms Taylor, who responds to the situation with the bemused semi-seriousness of a student about to take his SATs.

But then the interaction shifts. The nurse’s voice becomes an eerie chirp and the scene suddenly cuts back and forth with violent precision between the examination and a series of photos taken of Taylor in a stripped, vomit-covered state. The nurse’s voice fuzzes out and we begin to notice the room’s light, a frostbitten shade of blue that chills Taylor, whose face flickers with both teary unease and stock-still detachment.

It’s a shattering and even triggering moment of very real dehumanization that is profoundly indicative of American Crime’s rare level of daring. The scene actually embodies Taylor, permeating and physicalizing his psychology in a way that’s rare even for contemporary American cinema these days, much less network television. But American Crime not only bridges the gap between the two mediums—it renders it all but nonexistent.

Created and executive produced by 12 Years a Slave’s Oscar-winning scribe John Ridley, who also writes and directs, American Crime’s first season (centered around a small town murder and its racial implications) debuted to considerable critical fanfare but modest ratings: its series premiere netted 8.37 million viewers, but by its season finale, its audience had dropped to nearly half that. (Its second season ratings have largely been in keeping with these numbers.) In spite of such dispiriting returns, the series was saved from cancellation by recently-ousted ABC president Paul Lee.

In just two seasons, American Crime has modestly proved itself as a beacon of broadcast diversity, both in terms of its multiracial ensemble and its enviable stable of eclectic directors. Just months after an August 2015 Directors Guild of America diversity report revealed a piddling percentage of active women and minority directors in TV, American Crime is leading the charge in widespread directorial diversity. Among the nine directors who have helmed one or more of the season’s ten episodes, five are women, four are artists of color, and two of them (Gregg Araki and Kimberly Peirce) are out filmmakers who are also formative pioneers of the New Queer Cinema movement of the 1990s.

These craftsmen and women are ensuring that there are also plenty of visible strides being made in front of the camera as well. In recent years, television has achieved visual sophistication on a grand scale on shows like The Knick, Transparent, and True Detective, all of which are either on cable or streaming platforms. This is rarely the case, however, when it comes to network television, whose governing aesthetics are still slowly progressing.

Through its pointed cinematography, fluid editing, and deft manipulations of sound, American Crime achieves visual elegance and sonic engagement like no other network program before it: it’s maybe the only primetime show that’s ever halted the breaks on its high-speed locomotive of a story to show us a five-minute modern dance number, captured in one spectacular single take. Elsewhere, the show has a penchant for rigorous stylistic choices like painfully intimate close-ups, prolonged tracking shots, and purposely-obscured dialogue. They counterbalance a sobering and stunningly-peopled saga that tackles more provocative thematic terrain in its first episode than most series do over the course of an entire season, from the educational disparity between public and private institutions within the story's suburban Indiana setting to audacious dialogues surrounding race, class, and sexual orientation.

With issues as white-hot as these on its agenda, a series like American Crime might risk dissolving into polemic, but Ridley and his collaborators effectively skirt the traps of easy moralizations that episodic television tends to fall into. It’s the rare network crime drama that asks viewers to follow along week by week not to uncover the lurid details of its scandal of the season, but to gain increasingly trenchant insight into its fatigued and fascinating characters. It painstakingly looks at rape not with the intent of capturing some sleazy, pillaging perp, but of genuinely questioning the ways in which we categorize acts of sexual violence.

Ridley’s basic storytelling ethos is nothing if not inclusive, although that hasn’t always been recognized as such. 12 Years a Slave may have netted Ridley an Oscar but it also garnered its fair share of pushback from critics like Mark Harris, who disagreed with the biopic’s single-minded focus on the singular experience of Chiwetel Ejiofor’s eventually freed slave Solomon Northup. When I think back to 12 Years a Slave, however, I remember a film that isn’t afraid to steal away a moment from Solomon’s battle and hand the film over to for a stunning two minutes to Alfre Woodard’s Mistress Shaw and engage us in the startling wit and deep-seated defiance of an ex-slave who has become the privileged wife of her master. In his latest endeavor, Ridley again opens up the possibilities for a confluence of experiences and opinions to be emphasized across the season.

Characters like Joey Pollari’s beleaguered basketball captain/accused rapist or Felicity Huffman’s crisis-controlling headmistress often act questionably, but by widening its lens onto a fuller array of individuals, American Crime credibly depicts even its most reprehensible inhabitants as just several threads in a much larger, crueler social fabric who are each possessed of their own vulnerabilities and burdens. Similarly, the series gains even more complexity by imbuing even its most sympathetic characters with some fascinating shades of grey without making feints towards antiheroism.

Taylor’s neurotic mother (an excellent Lili Taylor) adamantly pursues justice for her son out of an urgent sense of parental duty that isn’t diminished but actually given emotional credence by a dangling history of mental illness. Meanwhile, Regina King appears early on as the mother of the team’s charismatic star player (engagingly played by Trevor Jackson) with the initial expectation that she’ll be as effortlessly sympathetic as she always is onscreen, until the crusty protectiveness of her maternal lioness announces itself with potent and unapologetic prejudice.

American Crime received probably its biggest boost when King, so fantastic in everything from Jerry Maguire to Ray over the years, nabbed an Emmy for Best Supporting Actress in a Miniseries or Movie in September 2015 for the series’ first season, the first major award win and nomination of King’s three-decade career. King, Huffman, Taylor: these actresses, each at a point in their respective careers when Hollywood typically institutes the aging-out process, are all duly-equipped with a time-honed ability to draw out different facets of a single character like objects from a magician’s hat. Huffman, in particular, gives maybe the best performance of her career, smoothly playing against the inclinations of her potentially villainous character with a sculpted physicality and cool equanimity that somehow achieves both deep moral ambiguity and hard-won sympathy.

It’s a feat of acting that’s matched just as capably by the younger members of the cast, especially Jessup and Pollari, who poignantly inhabit two separate but equally sobering depictions of burdened teenage homosexuality. American Crime understands in a mature and ultimately devastating way that even in a culture of Gaga, "Love is Love," and Modern Family, proudly inhabiting one’s sexuality simply isn’t a feasible option for many teenagers. In American Crime, queer desire is generally carried inside oneself, hidden even from those to whom one is closest. Ridley and his fellow writers acutely understand that many young people—but particularly young men—choose the closet not only to avoid ill-treatment, but to preserve perceptions of innocence, masculinity, and normalcy within the eyes of friends and family, inclinations that have rarely felt truer or more tragic than they do in American Crime.

At one point, we watch Pollari’s Eric discretely hook up with an older man until Eric grows uncomfortable and abruptly halts the encounter. “I just want to kiss,” he begs the stranger with such raw sensitivity that, even in spite of the questionable things we will come to learn about Eric as the season evolves, this moment still resonates as one of the series’ most moving and humane.

Even more than its subtly cinematic ingenuity and its commendable efforts at leveling the industry playing field, this is the atypical sensibility that more television—and even film—creators ought to inherit. There are no heroes or villains to be found anywhere within American Crime's fraught real-world landscape. Every single character who flashes before our eyes comes to merit both our investment and our empathy, however grudgingly they are initially offered. To watch American Crime is to fully and humbly understand that there is heartbreak to be found in all individuals and experiences, so long as we—as audiences and storytellers—are willing to look close enough.