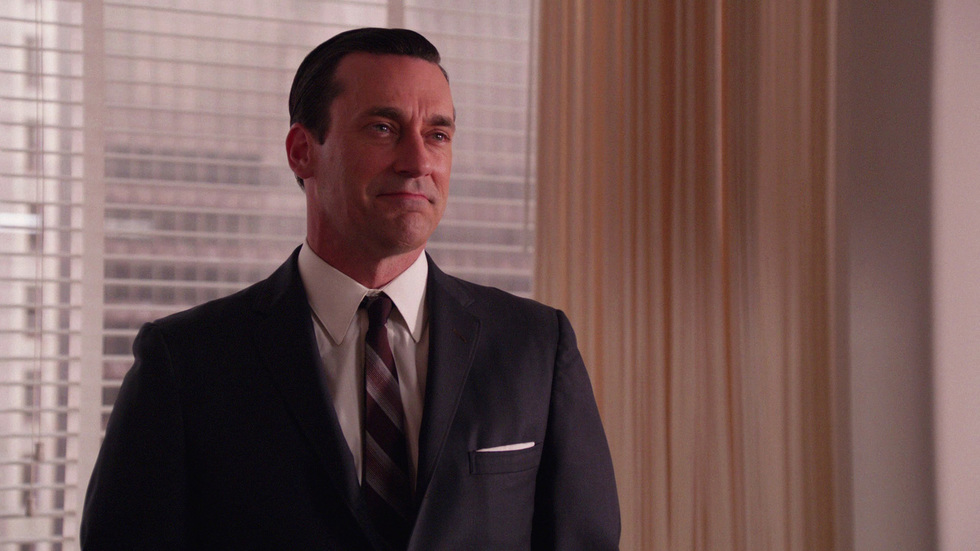 I woke up in a panic this morning, thinking I had overslept. I desperately looked at my phone, only to find it was actually a few minutes before my alarm goes off. I decided not to think anything of it and go on with my morning.

As I rode the subway to work, I looked at my bag to see if I had all my cards, keys... they were all there. I tried to distract myself by reading, but couldn’t get past the first line. I grew anxious at this feeling of loss, this emptiness, that seemed to follow me. Something was off, I just didn't know what.

But then, as the train stopped and the doors opened, in came a man dressed in a great pressed suit with an elegant black hat and a leather suitcase. It suddenly dawned on me. I had found the root of my anxiety, this sense of loss. Yesterday was the last time AMC would ever air a new episode of Matthew Weiner's brilliant Mad Men. Immediately I felt a knot in my stomach.

My best friend and I started watching the show during our first year of Film School, back in London in 2008; we were 20 years old then. I remember the first season had already aired and we binged watched it. We were hooked. Instantly, it became sort of a religion, as we realized what Matthew Weiner was creating with this show. It wasn’t about explaining everything to the viewer or tying all the knots, it was more about what was kept unsaid and unexplained; it took subtlety to the next level. April was suddenly my favorite month because it was when Mad Men would air. I remember being constantly disappointed when I went to the cinema, but would find comfort and nourishment in the excellence of Matthew Weiner’s execution of even just one episode. Its integrity in the writing, acting, cinematography, production design, music, you name it, was incomparable. Jon Hamm’s looks never hurt either; nor did Christina Hendricks' incredible sex appeal -- “Marilyn was a Joanie!” It was SUBLIME.

Then came the moment of suspense: the end of Season 4, 2010, when their initial contract had come to and end. Would AMC renew it? Would they agree with Weiner’s terms? We prayed, lit candles, made wishes on stars, hoping that they would. They couldn’t let Mad Men die before its time.

Finally, after much suspense, news came out that we would have 3 more seasons with them, with the great gift that the third one would be released in the course of 2 years. This meant 4 more years. We could live with that, they seemed to be plenty. Not to mention the one gap year in between. 2015 seemed so far away.

By the time Season 5 came out, I was no longer a student and had moved back home to Mexico. My best friend and I no longer lived in the same country, but this did not stop us from continuing our tradition. We would talk in anticipation abut the episode that would air, then would watch it at the exact same time, only to take the whole week to discuss every single detail. We started to identify every twitch, every mannerism; we could tell when a character was uncomfortable before any other character could. We began to see the symbols, spot the motifs, learn the rich and sophisticated language that Weiner and his team had masterfully built through the years.

It was also around this time that the show started to move towards the 70s, and so did the awkward fashion, mustaches, sideburns and psychedelic ties. Not everyone was a fan. The show got darker. Don seemed beyond salvation. But for those of us who really understood its multi-layered characters, our love only grew deeper. It was suddenly as if we knew these people and had grown up with them. I had never experienced this connection with any fictional character. It was indescribably electrifying.

When the seasons ended the thought would cross my mind that Mad Men had an expiration date, but chose to ignore it as much as I could. And then came 2015. 8 years had gone by, 8 YEARS HAD GONE BY!! I was no longer a 19 year old film student, but rather a young woman living in the greatest/worst city in the world trying to make my way, not different from Peggy or a young Don or like many characters on the show.

Words cannot express how I will miss the constant mid day drinking, lawnmowers in the office, LSD trips with Beach Boys soundtracks, Peggy & Don’s friendship episodes, breaking into unexpected and brilliant musical numbers, Fat Betty… FAT BETTY! (this is not a typo, it was so brilliant it needs to be mentioned twice) The Suitcase Episode, Peggy’s sexual encounter in the cinema, Betty’s sexual encounter in the Bar.. I mean I could go on!! Lane! Joanie! Sal!!

Mr. Weiner, I just want to thank you for your integrity and true love of the show. I do not judge anyone who gets persuaded by money or trying to get longer contracts. I can’t even imagine the kind of pressure success can bring, but Mr. Weiner you and your team never succumbed to any of this, you were solid in your vision and did not falter or were ever persuaded from your clear direction . You stayed true to your instinct. I salute you sir and aim to take this as an example to always stay true to your gut, no matter what. A true sincere Thank You!

And so, like every good thing, Mad Men must come to an end. Well, at least for the world, as I have still yet to watch it. I could not bear the idea of losing this piece of my life, and so I made the conscious decision of going against AMC’s will: I would not let Mad Men die on Sunday night. I would like to keep it alive for myself, even it's just for one more day. So, for me, Don is still sitting on that dirty bus stop on the side of the road during a hot, sunny day in the Midwest, waiting to find his way home.