This year’s Tribeca/ESPN Sports Film Festival kicks off with a documentary about legendary NFL tight end Tony Gonzalez and his family. 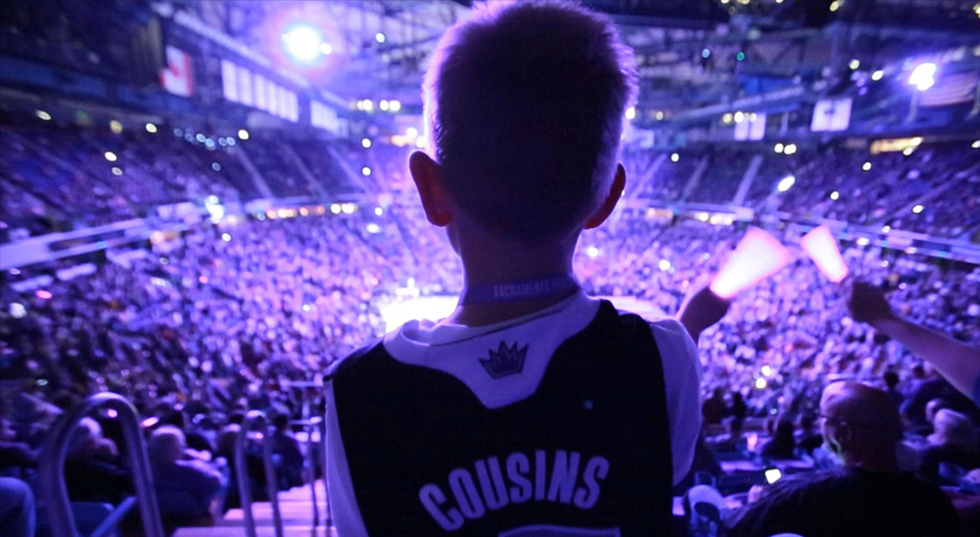 Sports fans and movie lovers come together at the Tribeca Film Festival, presented by AT&T, for our annual Tribeca/ESPN Sports Film Festival, sponsored by Mohegan Sun. This year’s program weaves together narrative and documentary features and shorts that highlight individual athletes, teams and the thrill and agony of competition.

The Opening Gala film for the 2015 Tribeca/ESPN Sports Film Festival will be Play It Forward from director Andrea Nevins. This documentary, which will celebrate its world premiere, follows the sibling dynamic during a pivotal year between renowned Kansas City Chiefs/Atlanta Falcons tight end Tony Gonzalez and his older brother Chris, whose own football dreams were never realized.

Audiences will also be treated to one of two shorts films from the Marvel Entertainment and ESPN collaborative series, 1: of 1: Origins, that will screen exclusively before all Sports Film Festival films. Told through narration and custom Marvel comic animation, each short from the series focuses on a single athlete and explores moments when—like all Marvel Super Heroes—athletes come to understand the origin of their powers. These special shorts focus on race car driver Danica Patrick and quarterback Colin Kaepernick.

In addition to the outstanding film line-up, Spike Lee, Eva Longoria, Nate Silver, and Retta will take part in our special Tribeca Talks®: After the Movie events, a series of conversations during which audiences are able to interact with filmmakers, film subjects, and industry leaders after the screenings.

As is tradition, the Tribeca/ESPN Sports Film Festival also hosts Sports Day as part of the Tribeca Family Festival Street Fair on Saturday, April 25. This beloved event gives sports fans, both young and old, an opportunity to enjoy a variety of free, sports-related games and activities. Sports fans and film lovers have something to be excited about this coming spring besides the start of baseball season!

The following films are featured in the 2015 Tribeca/ESPN Sports Film Festival, sponsored by Mohegan Sun:

An intimate portrait of All-American NFL tight end Tony Gonzalez, renowned for his sure hand and intrepid heart, and his older brother, and wingman, Chris. Take a seat at the Sunday night dinner table of the Gonzalez family and experience their pride, love, and resilience, as they speak candidly about how they overcame disappointment, and supported each other through tragedies on the winding journey to fulfilling their ambitions. The documentary is produced by Cristan Reilly and executive produced by Michael Strahan and Constance Schwartz

The following Tribeca/ESPN Sports Film Festival titles have been announced in their respective sections as part of the 2015 TFF film program:

In the 1960s, truck-driver Nick Piantanida discovered skydiving, and set out to break the world record for highest parachute jump by taking a helium balloon to the edge of space. Over the course of a year, his dream to launch the first civilian space program drove him to obsession. An ESPN Films release.

Patón, with his fiery temper and aggressive play, is the veteran star of his city’s soccer team. When his transgressions land him a lengthy suspension, he considers retirement, while discovering a world that consists of more than just feet and fists. This coming-of-middle-age tale reveals the predicament of leaving the arena where you most feel at home. In Spanish with subtitles.

Down in the Valley
Directed by Jason Hehir
(USA) – World Premiere, Documentary

How far would you go to save your hometown team? For many Sacramento residents, faced with the nearly certain relocation of their beloved Kings, no boardroom was too distant. One native son proved it. Follow former NBA superstar turned Sacramento mayor Kevin Johnson as he battles owners and executives to keep the Kings at home, in this roaring testament to the passion and power of the small-market fan. An ESPN Films release.

Since 1912, baseball has been a game obsessed with statistics and speed. Thrown at upwards of 100 miles per hour, a fastball moves too quickly for human cognition and accelerates into the realm of intuition. Fastball is a look at how the game at its highest levels of achievement transcends logic and even skill, becoming the primal struggle for man to control the uncontrollable.

Gored centers on Spanish bullfighter Antonio Barrera, holder of the dubious title of “Most Gored Bullfighter in History,” as he grapples with the end of his career. Captivating footage of past and present bullfights reveal Barrera’s tremendous passion for the sport, as well as his seemingly irresistible urge to confront death at every opportunity. In Spanish with subtitles.

Reforms have offered opportunity in Cuba but the children of the Revolution are unsure of the best route forward. For a half-dozen drag racers, this means last-minute changes to their beloved American muscle cars, as they prepare for the first sanctioned race in Cuba since 1960. Punctuated by a lively Cuban soundtrack, Havana Motor Club offers a fascinating glimpse at the resilience and ingenuity of the competitive spirit. In Spanish with subtitles.

Taking bribes and making deals is as essential as being a good rider in the Palio, the world’s oldest horse race. Giovanni, a young jockey, is up to the challenge when he faces his former mentor on the track. What ensues is a thrilling battle with the intoxicating drama that is at the center of Italian tradition. In Italian with subtitles.

Tribeca Talks: After the Movie

Executive producer Eva Longoria has teamed up with ESPN Films on a series of shorts which explore moments in sports history that shine a light on personal perseverance, true grit and aspiration, as well as achievement outside of any sports arena. The short film Go Sebastian Go (directed by Longoria) will world premiere, about the young singer Sebastien de la Cruz, whose rendition of the national anthem before Game 3 of the 2013 NBA Finals ignited racial tweets and hate filled comments – thrusting him into the national immigration reform debate.  Additionally, extended clips from other shorts in the series will screen including a short film on Heisman Trophy- and Super Bowl-winning quarterback Jim Plunkett directed by Ricardo Chavira, as well as a short on legendary French figure skater Surya Bonaly directed by Retta.

After the screening: Stay for a conversation with executive producer Eva Longoria and Versus director Retta (“Parks and Recreation”) who will discuss sports and activism.

During Super Bowl XLII, the Giants met with the New England Patriots who were undefeated going into the NFL finale. With two minutes left in the game, just when it looks like Giants quarterback Eli Manning will go down, he spots David Tyree, a veteran special teams player down the field and goes deep, setting up one of the most renowned plays in football history.

After the movie:  Stay for a conversation with Spike Lee.

Pro-wrestler turned politician Jesse Ventura garnered a crowd in the ring, and took this to the streets when he ran for Minnesota Governor in an unprecedented race with unpredictable results that even the polls couldn’t have predicted. Shock the World will appear in FiveThirtyEight’s “Signals” short films series that uses data and statistics to tell stories within the arenas of politics, sports, science, and other sectors.

After the movie: ESPN’s FiveThirtyEight editor in chief and statistician Nate Silver will discuss what can be learned from the numbers of political history with regards to the 2016 election.

In 1976, at the age of 14, Nadia Comaneci accomplished something that had never been done before in the world of gymnastics - scored a perfect “10”. An overnight sensation, she found herself suddenly propelled to the forefront of the sport, the Olympic Games, and the world. But, her story is much more than just one moment.

At 86, Joy Johnson was the oldest woman to run the 2013 New York City Marathon. The story of an inspiring athlete with an uncommon passion for her sport, and for life.

Star race car driver Danica Patrick retells the moment she discovered her super power as a 10 year-old racing go-carts. It was on a little track in rural Beloit, Wisconsin where she discovered that she would do anything to win, and found the internal drive and focus to accomplish greatness.

If you know football, you know one of its biggest stars, QB Colin Kaepernick. Yet, it was on the baseball diamond that a young Colin would be forever changed. At 12, he was already a stand-out athlete, head and shoulders over his peers in both size and skill. But on one fateful day, the hits were not coming, his fielding was off and his attitude was bad. His father would see this opportunity as a moment to help redirect Colin’s life and forever alter his destiny.