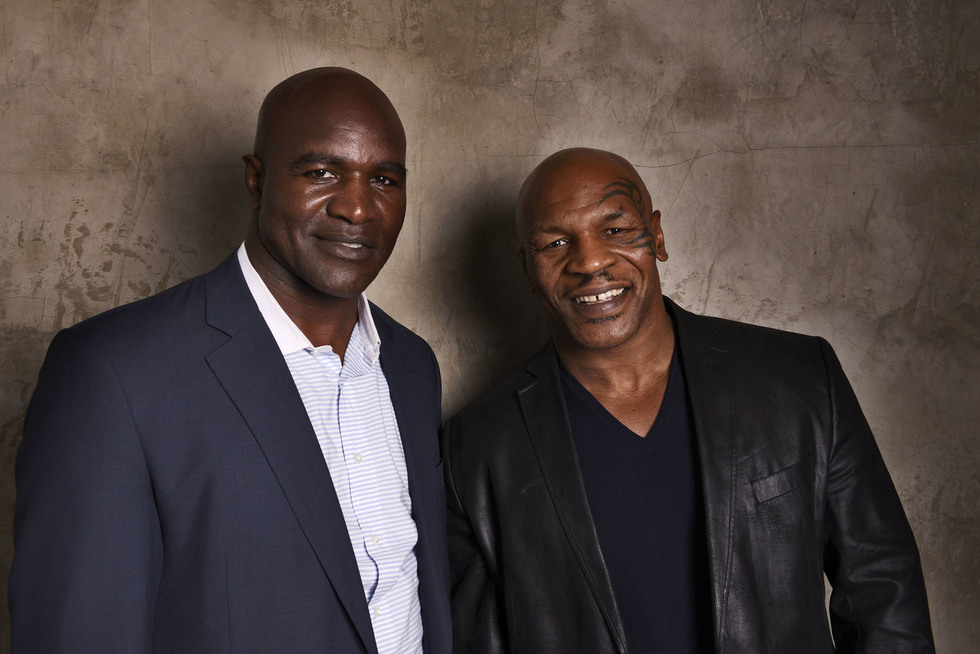 No ears were chomped.

On the contrary, it was all love between onetime boxing rivals Evander Holyfield and Mike Tyson at the panel discussion that followed the world premiere of Champs at the SVA Theatre on Saturday, as part of the Tribeca Film Festival.

Written and directed by Bert Marcus, who also joined the panel, the documentary gives an empathetic account of these two former boxing greats, along with Bernard Hopkins, who, at 49, is still making history, becoming the oldest boxers to unify major titles in a victory last night in Washington, D.C.

The film focuses on the journey that these three boxing legends went through, rising from the depths of poverty to become world champion. All three men talk about how boxing was their way out of their inner city neighborhood, where the prospect of being stabbed or shot to death was ever-present.

Tyson, a co-producer on the film, pulls no punches as he recounts growing up a pudgy, shy kid in the crime-ridden slums of Brooklyn, where he was bullied so viciously by other kids that he stopped going to school at 7-years-old. He joined a gang of petty thieves, eventually landing in a reform school in upstate New York. It was there he was fortunate to meet a counselor and former boxer named Bobby Stewart who took him under his wing and taught him the sweet science.

The doc argues that for many disadvantaged kids, subjecting themselves to the brutality inside the ropes, is their one shot to escape the brutality inside their homes, as well as outside on the streets. The film also vividly tells the all-too-common story of what happens to these brawlers, products of the streets, once they become champs. In the case of Holyfield and Tyson, they were both brought to their knees financially by unscrupulous sharks that have given the sport its unsavory reputation.

While Holyfield and Hopkins share intimate stories of their struggle, it’s Tyson who remains the most mesmerizing presence on screen, particularly when opening up about the inner demons that led to his dramatic fall from the “baddest man on the planet” to social pariah. For all his past transgressions, Iron Mike’s introspection, humor and vulnerability make him endearing, and you can’t help but cheer as he uses his hard-earned wisdom to get up off the mat and turn his life around.

At the post-film panel, moderated by ESPN host Jeremy Schaap, Tyson continued to entertain the packed crowd with a combination punch of clowning and sincerity.

Here are his 10 best quotes from the panel conversation:

10. “I overshadowed a lot of guys during my time, but he is inconceivably the most competitive human being I ever competed against. It’s easy to overlook that because he’s such a smooth, kind-hearted guy.” — on Evander Holyfield.

9. “Have you seen my bank account lately?” — in response to Schaap’s comment that he and Holyfield had lost a fortune and didn’t have much money left.

8. “There’s nothing special about me. I’m more lucky than anything in life.”

7. “I beat him. They robbed me of that count. I beat him.” — on his stunning knockout by James “Buster” Douglas in 1990 in Tokyo, Japan. At the time, Tyson was the undefeated heavyweight champion.

6. “I had a 9th grade education. But my kids go to Ivy League schools. I’m dumb as shit but I did something right.”

4. “I’m really friendly with the IRS these days. I like the IRS now.” — on paying money to the agency in back taxes for years.

3. “I am a better parent than my mother and my father and that’s a victory in itself.”

2. “My problem is that I always took myself too damn seriously and that got me in a lot of trouble.”

1. “My kids don’t have to fight. But if they did, I wouldn’t want them to fight anybody like me.” — in response to being asked by Schaap if he would let his kids box.

BONUS QUOTE: “Ten years ago, if you asked me where I’d be now, I’d have said F-ing dead. But I’m not dead. I have an awesome life. And I’m just very grateful. That’s the one thing I try to convey. Gratitude.”

The Tribeca/ESPN Sports Festival sponsored by Mohegan Sun has just begun -click here to discover the films, talks, and events we have planned for the next 10 days.