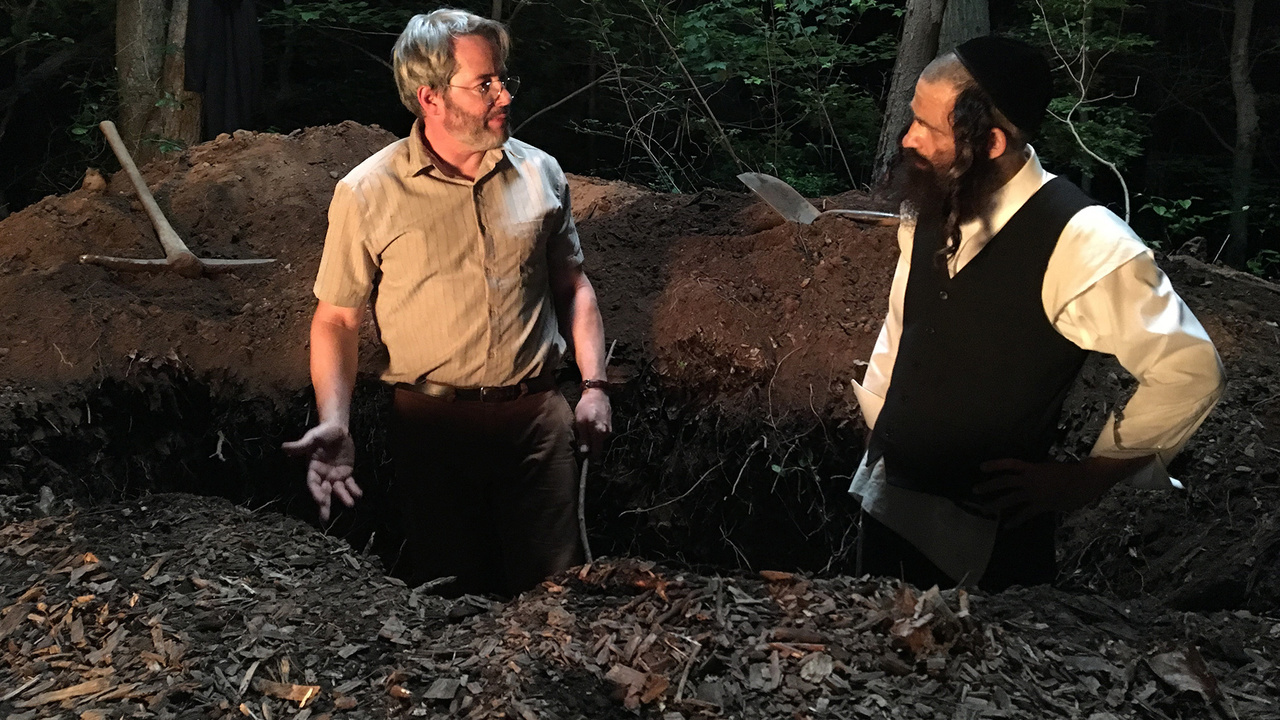 Grieving the recent death of his wife, Shmuel (Geza Rohrig), a Hasidic cantor in upstate New York, struggles to make peace with his loss. After a series of disturbing dreams, he grows increasingly obsessed with how her interred body will decay. Shmuel decides that, in order to move on, he must understand the science behind the decomposition process of his wife’s body—despite the blasphemy inherent in any scientific inquiry. To assist his sinful pursuit, he seeks out Albert (Matthew Broderick), a community-college biology professor who Shmuel enlists to teach informal science lessons. These soon grow to include homemade experiments and a road trip to a body farm, and, as their macabre misadventures and unlikely friendship grow ever more peculiar, the odd couple prove they will stop at nothing to satiate their curiosity and, ultimately, find Shmuel the peace he seeks. Director Shawn Snyder’s dark buddy comedy is a quirky look at death, biology, mourning, and tradition.

In 2016, Shawn Snyder was named one of Filmmaker Magazine’s “25 New Faces of Independent Film.” He received a bachelor’s degree in religion from Harvard and spent his twenties as an itinerant singer-songwriter before going on to study filmmaking at New York University. To Dust, his first feature, was supported by Tribeca, Sundance, the Sloan Foundation, and the Independent Filmmaker Project.

After receiving a BA at Harvard and traveling as a singer/songwriter, the last six years have seen Shawn's return to filmmaking. He recently completed studies at NYU's Graduate Film Program. His last short,Lulu, premiered at the Palm Springs International ShortFest in 2015. To Dust was part of IFP's 2015 Emerging Storytellers, the recipient of the Tribeca Film Institute's 2016 Sloan Student Grand Jury Prize, and part of the NYU Production Lab's inaugural slate. Shawn is a former IFP/Marcie Bloom Fellow and current Sundance Institute Feature Film Fellow.

Dr. Dawnie Wolfe Steadman is the Director of the Forensic Anthropology Center at the University of Tennessee, the home of the Anthropology Research Facility or "Body Farm." The Body Farm is renowned worldwide as the first natural laboratory for human decomposition. Dr. Steadman is a Board Certified Forensic Anthropologist and works on forensic cases throughout the country. She is also active in international forensic human rights investigations and currently works in Uganda.

Géza Röhrig was born in Budapest. At fifteen he founded an underground punk band, Huck®ebelly. He studied Polish Literature at Jagiellonian University in Warsaw and has a masters in directing from the Budapest University of Drama and Film. In the early 90s he lived in Jerusalem, then spent two years studying at a Hasidic yeshiva in Brooklyn. He has lived in New York since 2000 where earned an MA from the Jewish Theological Seminary. In 2015 Rohrig starred in the Hungarian Auschwitz movie, Son of Saul, that went on to win the Grand Prix in Cannes and the Academy Award for the Best Foreign Language Film. He currently has two films in post production, The Chaperone and Undergods. Rohrig has published eight volumes of poetry and one short story collection. Two of his books were translated into Polish and German.

Alessandro Nivola is an award winning actor and producer. Acting career highlights include a SAG Award for American Hustle, an Independent Spirit Award nomination for Laurel Canyon, a Tony Nomination for his performance opposite Bradley Cooper on Broadway in The Elephant Man, and the best actor award at last year’s Tribeca Film Festival for Liz Garcia’s One Percent More Humid. Upcoming films include Disobedience opposite Rachel Weisz, The Art of Self Defence opposite Jesse Eisenberg, and The Red Sea Diving Resort with Chris Evans and Haley Bennett. Alessandro runs King Bee Productions with his wife Emily Mortimer.

Ron Perlman is best known for his titular role in the Hellboy movies and his long run on the TV series Sons of Anarchy. He won a Golden Globe Award for his role in Beauty and the Beast. Ron recently produced All I See is You, directed by Marc Forster, and Pottersville, starring Michael Shannon, Ian McShane, Judy Greer, Ron Perlman, Tom Lennon, and Christina Hendricks. He produced and starred in Sergio and Sergie and is currently producing and starring in Asher to be directed by Michael Caton Jones and the Crackle series Start Up.

Emily Mortimer is an award winning actor and producer. Her collaborations with Martin Scorsese include Hugo and Shutter Island. She starred in Woody Allen’s Match Point. Emily won an Independent Spirit Award for Nicole Holofcener’s Lovely and Amazing and earned nominations for Best British Actress at the Empire Awards and Best British Actress in a Supporting Role at the London Film Critics Circle Awards for her performance in David Mackenzie’s Young Adam. Her latest films include Sally Potter’s The Party, Isabel Croixet’s 2018 Goya Award winner The Bookshop, and Rob Marshall’s upcoming Mary Poppins Returns.

Matthew Broderick is a two-time Tony award-winning actor. His performance in Harvey Fierstein’s Torch Song Trilogy won him the Outer Critics Circle Award for Best Supporting Actor. Broderick won his first Tony Award for Neil Simon’s Brighton Beach Memoirs and his second Tony for the Broadway revival of How to Succeed in Business Without Really Trying. Broderick has starred in blockbuster movies including Ferris Bueller’s Day Off, Glory, War Games, and Disney’s The Lion King. On television, Broderick has appeared on Modern Family, 30 Rock, and David Mamet’s A Life in the Theater, for which he received an Emmy nomination.