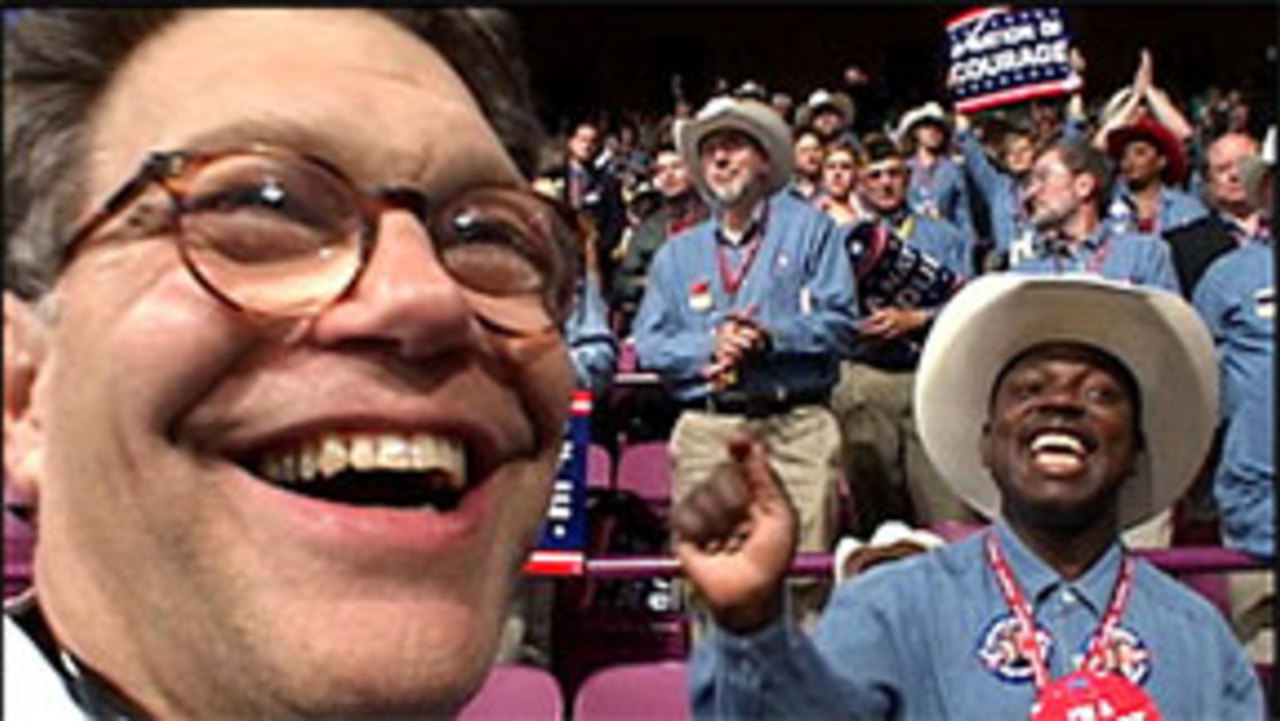 American politicians have a long history of consulting with God. George W. Bush heard from the Big Man right before he ran for president, and now comedian-turned-politician Al Franken has made a movie because, as he says in the opening credits, “God spoke to me.” For all its satirical moments, Al Franken: God Spoke is actually a very serious documentary that loosely charts the comedian’s transformation from a curly-haired conservative-basher on Saturday Night Live to a full-on political player. The film begins with Franken in a Santa Claus beard, attempting to evoke the voice of God but sounding more like Stuart Smalley. After Franken finishes bashing the right wing, the comedian’s narration abruptly ends and filmmakers Nick Doob and Chris Hegedus take over. In lieu of dispassionate interviews or archival footage, the duo achieves objectivity by filming Franken’s every waking moment—from getting out of his hotel bed on election day, to attending Air America Radio meetings in his Harvard sweats, to watching C-SPAN with his dog. The filmmakers even travel with Franken to his home state of Minnesota, where he plans to run for governor. This stepping-on-heels documentary style introduces us to the people in Franken’s life, like his irresistibly down-to-earth wife Franni and his Ivy League team of research assistants, and it paints a portrait of a wickedly smart and well-informed comedian who would like Washington to take him seriously. Though the leap from political satirist to politician will be difficult, if Ventura and Schwarzenegger can do the job, God knows Franken can.

Director Chris Hegedus has spent 30 years documenting some of the most famous artists and newsmakers of our time. In the 70's, she began her decades-long collaboration with D.A. Pennebaker; they have made numerous documentaries, including The Energy War, DeLorean, and Rockaby. They also made several music films, including Depeche Mode 101 and Only the Strong Survive. Hegedus won the 2001 Directors Guild of America Award for co-directing Startup.com and was nominated for an Academy Award® for The War Room, a look at Bill Clinton's 1992 presidential campaign. Hegedus received the International Documentary Association's Career Achievement Award in 2005.

Nick Doob began his career in the 1970's with the award-winning film 42nd Street Movie. He directed Sanford Meisner: The Theater's Best Kept Secret, the first contracted film for PBS' American Masters series and shot the mini-series The Energy War with Chris Hegedus and D.A. Pennebaker. In 1979, Doob traveled to China to shoot the Academy Award®-winning documentary From Mao to Mozart. He later won an Emmy™ for producing the PBS series American High. Working with Pennebaker and Hegedus, Doob shot the 2004 Emmy™ award-winning Elaine Stritch at Liberty (TFF 2004). He recently completed Carmen and Geoffrey with his wife Linda Atkinson.