'True Blood': A Look Back at 10 Pivotal Love (and Sex) Scenes

Now that the Vampire soap is back for one last season, here is one fan's sort-of-random favorite sampling of the early years when the foundation for love and sex on this crazy ride was set. 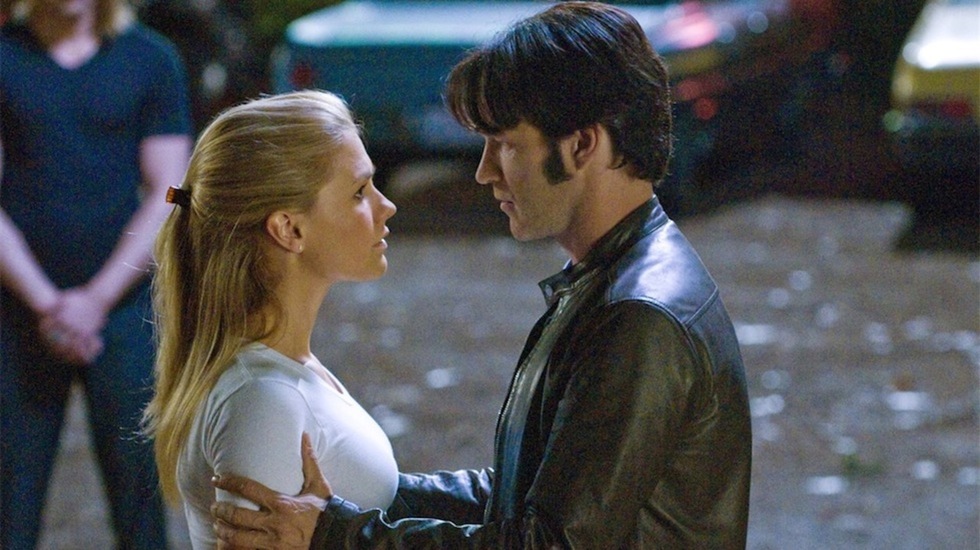 The seventh and final season of True Blood premiered Sunday, the sexiest vampire show on television about, as Alan Ball described it “the horrors of intimacy”—a phrase he “pulled out of my ass” during an interview and which seems perfect: dark and sweet and dangerous and hot like a spirit-raising bonfire.

Existential themes abound—faith, class, poverty, addiction, the supernatural world, the limits and bounds of humanity—yet the most profound themes that nobody can deny are: love and sex. What is it that people love about vampires, Alan Ball asked? “It’s the pathos of the human condition,” says one cast member in this quite beautiful cast video on HBO, “which is really ultimately everybody’s search for love.” Bill (Stephen Moyer) brings it home, “It’s so hard to talk about this show without talking about sex.” Yep. Good sex. Often absurd sex. Plus, True Blood has the whole "centuries of love and sex" thing going on—vampires can have, as executive producer, Brian Buckner points out, “So many loves over the course of their lives and humans  have less time to have those loves.”

And there's no denying the allure of Anna Paquin’s and Stephen Moyer’s union and their new HBO collaboration (they've signed a 2-year contract and are working on several films)—if True Blood wasn’t softly pornographic enough, now we know that this sort of immortal amour can transcend the Louisiana television studio. It can bear twins named Charlie and Poppy and it can possess fans to tattoo vampiric speeches about magic and miracles into the smalls of their backs—all 80-or-so words of it (apparently that happened).

After Sunday night's premiere of what's expected to be a dark, serious, hopefully just campy enough season—beginning with a Sookie sex scene directed by (and not with) Stephen Moyer—in true, envying (stalking) fan style, we’ve gone down the rabbit hole of True Blood’s formative love and sex scenes. “How can a show about the horrors of intimacy not address love and being in love and what that means because to me, vampires are kind of a metaphor for sex,” says Ball. Here is a sort-of-random, not-thorough smattering of the early years when the foundation for love and what Vulture called "this Grand Guignol sex cartoon" was laid. (Videos are at the links if not embedded.)

1. Bill and Sookie meet when Bill, the first vampire to take a red booth at the former Merlotte's (now Bellefleur's Diner), orders a bottle of synthetic blood. The only bottle the diner ever had went bad a while back because “nobody ever ordered it.” Bring me a glass of red wine, says Bill, to give him a reason to be there and so begins the sexual awakening of Sookie Stackhouse.

2. Bill and Sookie’s first time—Sookie in flowing white, Cat Power playing over the crackle of the fireplace, Bill’s fangs come out and he has a brief moment of shame that Sookie puts well to ease.

3. Eric and Sookie make hot, sweet love among Sookie’s flowery cotton sheets in season four, after Eric is temporarily lobotomized, his memory wiped at the control of the necromancers. Sookie, estranged from a newly evil Bill, is swept off her feet by the sweet and amorous Eric, in love with Sookie and ready to ravage. Post coital, Eric talks softly, feeling Sookie’s heart beat “through your skin into mine. If I lay still and think about nothing else, feels like my own heart is beating.”

Bill smacks down Eric for his own sexual honor, though declares it “strictly business, vampire business.”

4. Jason and Amy’s V Dream: Jason Stackhouse has his own sexual awakening throughout the seasons, though he was not quite the virgin that Sookie was at the beginning of the show. Here, he “felt like the whole world came together,” as he takes a six-hour V trip with Lizzy Caplan’s Amy who is the first to see Jason’s old, wise self. On V, Jason learns ecstasy, tripping across lush green fields in white cotton, all the while, the panties remain on.

5.  Jessica and Jason: so many good love and sex scenes but this one is all about the “definition of sin” and how “you and me” got turned on and loving someone’s heart even if it was all messed up. “There were times, hell yeah, definitely love.”

7. Speaking of gay pride (True Blood is nothing if not a rare realistic celebration of gay love), Lafayette and his sexy ass shows the love he's made of, delivering the "burger with AIDS" to a boothful of Southern bigots.

8. Godric bequeaths the ultimate vampire love on Eric: life. “I’ll be your father, brother and your child.”

9. “There are centuries of faith and love between us,” Godric assures Eric, as the maker prepares to burn to death after 2,000 years of life. Eric, diabolical delicious vampire who has cast wrath on Sookie, Bill and so many loved ones, sobs blood and must say goodbye to his maker, who is sacrificing himself for all of the vampires. Sookie cries human (sort of; well, fairy) tears and Godric sees God.