Has it really been 10 years since Luke Wilson, Vince Vaughn, and Will Ferrell decided to slough off their adult lives and go back to college in Todd Phillips's "Old School"? 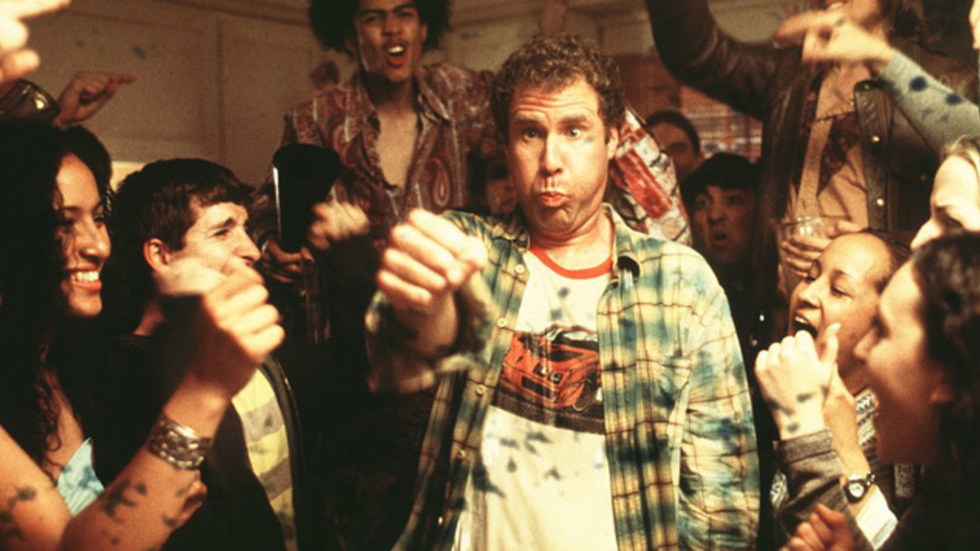 When Old School was released in 2003, the film was a total sensation, sparking Will Ferrell's film career, re-inventing Vince Vaughn's onscreen persona, and ... well, Luke Wilson's on Enlightened now, so it all worked out. More than anything, it kicked off ten years of comedies about Manchildren. Guys who didn't want to grow up, who dedicated themselves to behaving badly, who celebrated immaturity.

Immature comedies were hardly a new thing, of course. I don't want the cast of Police Academy to start rolling in their graves or anything. But the specific post-Old School era of comedies have been a pretty cohesive lot, with Ferrell, Vaughn, Ben Stiller, Judd Apatow, the Wilson brothers, Kevin James and others forming a veritable cottage industry of one type of comedy. That's the legacy of Old School. Here's a look at ten years of its legacy.

The movies were still figuring out how to respond to our new Manchild ideal in 2004. Ben Stiller was still playing out the Meet the Parents string, which featured awkward comedy but was actually about growing UP (getting engaged, having babies) than regressing. Meanwhile, Adam Sandler was busy revisiting his rare "being sweet with Drew Barrymore" side with 50 First Dates. But Manchildren would have their day, as Dodgeball, Starsky and Hutch, and especially Anchorman set new standards for how men in comedies would behave. With the latter two movies, both set in the 1970s, the Manchild was even given a historical context. The Manchild was ever thus, his collars just used to be wider, that's all.

[A note on inclusiveness: It's telling that 13 Going on 30, a film explicitly about an adult acting like a child because she really is a child, brought in less money that all the movies listed above. The journey of the Womanchild would be an arduous one.]

Wedding Crashers brought Vince Vaughn together with a different Wilson brother this time, but the results were the same: men acting like boys to get chicks. Will Ferrell made a cameo, and he also starred in Kicking and Screaming, the movie that proves that a Manchild can inspire actual children (also the movie that will show up on your cable grid and make you think it's the Noah Baumbach one EVERY TIME). The next evolution of the Manchild game would occur when The 40-Year-Old Virgin came along. The Apatovian style had a name now and was more explicit than ever about being unable to deal with adult relationships without 150 minutes worth of difficulty.

With Adam Sandler being a family man and learning lessons and growing old in Click, Vince Vaughn delivering as close to an adult relationship as he was capable of in The Break-Up, and Ben Stiller making actual children's entertainment, the Manchild slack had to be picked up by some new faces. Enter Matthew McConaughey, whose Failure to Launch kicked off a mini-genre of Manchild rom-coms (the concept of the Manchild has always been a fixture in rom-coms, but the McConaughey films really laser-focused on it); and Matt Dillon, Manchild emeritus from at least There's Something About Mary, if not before, played the straight guy to Owen Wilson's Manchild in You, Me, and Dupree.

Still, the Manchild standard for 2005 was set by one of the originals: Will Ferrell in Talladega Nights: The Ballad of Ricky Bobby. The logline of which could very well have been "Manchild drives a car." Ferrell also brought along Euro Manchild Sacha Baron Cohen, helping to expand the Manchild Universe to new voices.

[A note on inclusiveness: It didn't make much of a splash, but Dodgeball alum Justin Long went and made Accepted, which was basically Young School, i.e. Old School for actual college-aged people. America wasn't ready to have their minds expanded quite that far.]

Judd Apatow returned with another movie about guys who refuse the call to maturity. The specific Manchild aspect of Seth Rogen and pals in Knocked Up was more central to the plot than in his previous film, and while in the end, Rogen put down the bong, Katherine Heigl's character was still clearly painted as the bitch in that scenario. Sandler and Ferrell did their part for the genre this year, with I Now Pronounce You Chuck and Larry and Blades of Glory, respectively.

But the demographic of the Manchild really expanded in 2007: Wild Hogs pushed well past the "mid" in mid-life crisis, while the hugely successful Superbad introduced Jonah Hill and Michael Cera as stars who would end up taking Manchild-style comedy into the realm of actual youth. Less successful? Dane Cook, who seemed perfectly poised to further the cause of cinematic Manchildren, but Good Luck Chuck bombed.

Manchildren suffered their harshest betrayal yet in 2008, as Owen Wilson abandoned ship and made Marley and Me, a movie about a responsible adult relationship and the unconditional love of a family pet. Vince Vaughn at least had the decency to act annoyed while being dragged to the in-laws' houses in Four Christmases.

Ben Stiller picked up the torch for Manchildren with the super-successful Tropic Thunder, bringing Robert Downey Jr. into the fold and, via Downey, earning the very first Oscar nomination of the Manchild era. (Speaking of which, can we say that the Manchild movement of the 2000s helped to inspire the Best Picture-nominated reverse-aging drama The Curious Case of Benjamin Button? I SAY WE CAN!)

More classic Manchild movies like Will Ferrell and John C. Reilly's Step Brothers and Adam Sandler's You Don't Mess with the Zohan didn't perform as well (though not as poorly as Ferrell and Owen Wilson's respective bombs, Semi-Pro and Drillbit Taylor) and seemed a lot older and mustier than comparatively more spry movies from the Paul Rudds, Seth Rogens, and Jason Segels of the world with movies like Pineapple Express (Manchild stoners), Role Models (Manchild mentors), and Forgetting Sarah Marshall (Manchild gets dumped).

[A note on inclusiveness: Still working on that mythical Womanchild. Anna Faris gave it her best shot with the indie Smiley Face (Womanchild stoner) and the more mainstream The House Bunny (Womanchild Playmate), but America didn't wholly respond.]

Just when it seemed like the Manchildren could barely make an effort, when limp movies like Couples Retreat and Old Dogs were just going through the Manchild motions, when the best movie about a man trying to recapture his lost youth was 17 Again with ZAC EFRON, of all people*, when Judd Apatow and Adam Sandler gave up all pretentions of comedy and just focused on the desperate misery of the Manchild in Funny People ... when all seemed lost, it came.

It came from Vegas. It came with Ken Jeong locked in its trunk, naked. The Hangover came and told Manchildren everywhere that they didn't have to despair. They didn't have to get old and sad and contemplate their mortality. They could look like Bradley Cooper, man! They could do GHB and fuck tigers and get married to Mike Tyson (that's what the movie's about, right?) and be friends forever in the City of Sin! They could also make $277 million and send the movie industry into a copycat frenzy.

* On the real, though, the best Manchild movie of 2009 was obviously I Love You, Man.

The Hangover effect would be seen in debauched movies like Get Him to the Greek and Hot Tub Time Machine, as well as the increased presence of New Manchild Ideal Zach Galifanakis, who teamed up with Robert Downey Jr. for Due Date. Adam Sandler went the more classic route with Grown Ups, addressing the Manchild issue head-on. Also notable: The Expendables, which extended the Manchild ethos into action drama.

Here's where The Hangover effect really kicked in, trickling down to horny-dude-is-horny movies like The Change-Up and Hall Pass, one-drugged-up-night-of-funny-crime movies like Horrible Bosses, and even the odd Hangover-lady movie like Bad Teacher. But the gender card was really flipped with Bridesmaids, the first successful Womanchild movie. HUGELY successful. A breakthrough. And with The Hangover II being such a huge disappointment, Bridesmaids was suddenly the new standard-bearer. (Well it wasn't going to be Jack and Jill.)

Has the time of the Manchild passed us by? Is Ted really the best the genre had to offer us this year? (No, the best the genre had to offer us was 21 Jump Street, but with twentysomethings acting like high schoolers, it feels appropriately a generation away from the Old School model.) Ferrell and Galifanakis didn't make much of an impact with The Campaign, Bradley Cooper and Kevin James were making stabs at semi-seriousness with Silver Linings Playbook and Here Comes the Boom (obviously some more successful than others). And This Is 40 felt almost like a eulogy for the Manchild movie, with Judd Apatow learning to accept his life as an adult.

Is this it, then? Is this the end? Maybe not. We've got the wave of post-Bridesmaids comedies still to come. And Anchorman: The Legend Continues could bring it all back around. If Old School taught us anything (it taught us EVERYTHING), it's that you can always go back and make an ass of yourself at any age.

'The King of Comedy' to Close the 2013 Tribeca Film Festival