With 'The Heat,' America's Sweetheart is once again showing her inner badass. We picked 16 of her most notable roles and ranked which ones were the toughest. 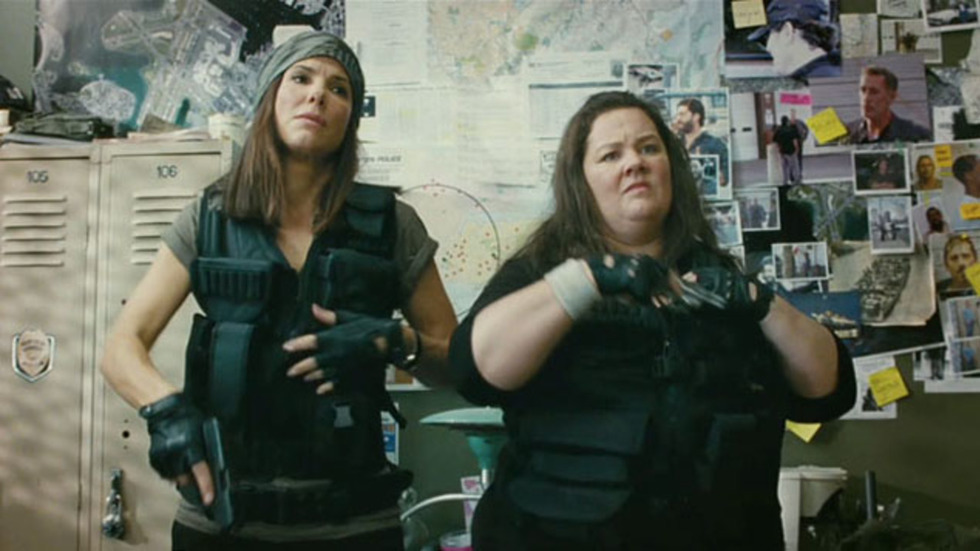 16. The Vanishing: Not to kick this list off by getting into victim-blaming or anything, but Bullock's role in this American remake of a French suspense classic is essentially to be the wife who gets kidnapped and sets the whole story into motion. Can't really give her a whole lot of points for secret toughness.

15. Hope Floats: I mean ... she's just kind of sad. Yeah, Harry Connick Jr. helps her learn to love again, but nothing suggests the kind of steeliness we're looking for.

14. While You Were Sleeping: Lucy is not really a tough girl, and once it comes time to come clean with the Callaghan family about how she was never really Peter's fiance and has in fact fallen in love with Jack, she's downright wussy about it. But she does jump onto train tracks to save Peter in the first place, so that's certainly a point in her favor.

13. Divine Secrets of the Ya-Ya Sisterhood: Siddalee Walker pretty much gets dragged around the plot of this film by her mother's looney troupe of friends. But growing up as Ellen Burstyn's daughter had to imbue her with some toughness.

12. Extremely Loud and Incredibly Close: As 9/11 widow Linda Schell, Bullock plays a woman whose inner toughness is hidden for much of the movie, until we find out later on just how much she's been holding her family together. This list isn't entirely about that kind of inner toughness, but it's not inconsiderable.

11. A Time to Kill: Ellen Roark is a northeastern liberal activist tough enough to stride full-speed into a hot-button racially-charged murder trial in the deep south and offer her services. Unfortunately, the Klan kidnaps her and nearly kills her, in kind of a cheap ploy by the movie to victimize a woman in order to push the male lead character to resolution. Not great.

10. Crash: Sandy's character in Crash is a mean old racist bitch, that much is true. But being mean isn't the same as being tough, and while we would probably not want to be in the same room with her after an altercation at valet parking, but mostly, her character boils down to being scared, all the time.

9. Demolition Man: In the hypothetical future of Demolition Man, all crime has been eradicated. So despite the fact that Bullock's Lenina Huxley is a cop, she's not a particularly tough cop. Working with unfrozen Sylvester Stallone to take down Simon Phoenix does toughen her up some.

8. The Net: The dominant memory I have of Sandra Bullock in The Net is of her running. Running away from cyber-hackers. Running away from shadowy conspiracy types. But it's worth noting that Sandy also ends up taking it to Jeremy Northam and killing him on that boat. One of the earliest examples of the Secretly Tough Sandy character type.

7. The Proposal: Bullock's Margaret Tate is a mean old boss, and despite the fact that the bulk of the movie is a romantic comedy that requires her to soften herself and get crunk in the woods with Betty White in order to find love with Ryan Reynolds, that inner core of toughness remains. Mostly.

6. 28 Days: Bullock's drunken carouser is hell on wheels, particularly at the beginning of the film. Her hard-won sobriety and friendships with her fellow twelve-steppers only makes her stronger, not weaker.

5. The Heat: This movie is only opening today, so we can only go by the trailers, but Bullock plays a cop whose by-the-book nature conflicts with the hardscrabble ways of her partner Melissa McCarthy. It seems a safe bet that Bullock's character finds her inner toughness along the way.

4. Practical Magic: Sure, Sally Owens seems like a regular PTA mom, and even the way she practices witchcraft isn't incredibly hard-edged. But she and her sister do manage to dispatch of a bad boyfriend AND his lingering evil spirit.

3. Speed: Just an ordinary commuter taking public transportation at the beginning of the movie, Annie really toughens up as she's asked to drive the bus and keep it above 50 MPH. Sure, she may make her fair share of girly protests, and she needs Keanu Reeves to rescue her from Dennis Hopper at the end, but she jumps that gap in the road like a real boss.

2. The Blind Side: Leigh Anne Tuohy has all the trappings of a tough-talking suburban soccer mom, but Bulock's portrayal really help you believe that she can back it up. Supplementary football coaching? Staring down a gang member threatening her son? She's on it.

1. Miss Congeniality: Gracie Hart is a badass. She just is. She's such a badass that the first thing that anybody thinks when they say a movie where Bullock might be playing another badass, like The Heat, the first thing anymbody thinks is "Miss Congeniality." Gracie's unassuming toughness lasted two movies, stood toe-to-toe with William Shatner and Regina King in a Tina Turner wig. She's earned her #1 placement.

Previously: Who Are The 5 Sexiest Movie Characters of 2013 So Far?