On the occasion of his return in "The Internship," we're looking at Owen Wilson's roles through the lens of how smart his characters THINK they are. 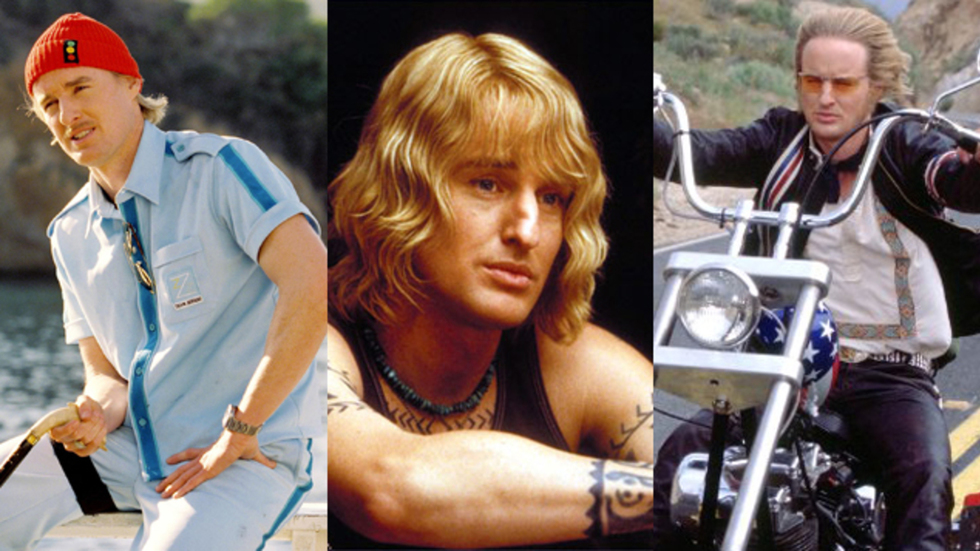 Owen Wilson is one of Hollywood's most reliably amiable performers, and one of the things he does best is portray characters who have a lot of confidence in their own ability ... whether or not they can actually back that confidence up. We grabbed a baker's dozen of Wilson's best-known roles and ranked them by just how smart Wilson's character THINKS he is.

13. Oscar Choice in Armageddon: There don't seem to be too many delusions of grandeur in Oscar, who signs on to become an astronaut and save the world when the rest of his drilling crew does. He know he's out of his element -- a rare attribute for an Owen Wilson character.

12. Gary Dixon in Anaconda: So, yes, Dixon is a documentary filmmaker, and thus should be subject to the level of self-regard that documentary filmmakers hold for themselves. But he's also just the sound guy, so that helps keep him grounded. Plus he ends up dead so quickly that it's hard to tell.

10. Ned Plimpton in The Life Aquatic: Ned comes into the movie as the illegitimate son of legendary oceanographer Steve Zissou, but he never makes any claims to his old man's talents. He's a pretty humble, unassuming guy, and it's SO WEIRD to see Owen Wilson act that way.

9. Hansel in Zoolander: Hansel (he's so hot right now) is not a smart guy. That much is crystal clear well before the part where he and Derek Zoolander try to break open a computer to discover its secrets. But how smart does he THINK he is? He makes all these claims towards being a worldly guy, cultured by his experiences with various shamans. Yet he would probably shrug it off if you talked to him about it. After all, he does possess an atitude that says, "Who cares? It's only fashion."

8. Ken Hutchinson in Starsky & Hutch: Hutch was also not a smart guy, but he seemed to think he had the whole system wired. Think of him as Hansel without the "Who cares? It's only fashion" attitude.

7. Eli Cash The Royal Tenenbaums: Oh, man. Eli Cash is the strangest case study for this list. He is the classic Owen Wilson character in that he talks and behaves like he's an incredibly intelligent person, only he's massively self-deluded. The drawback -- and/or the wonderful thing about Tenenbaums -- is that we get to see that facade crack, almost exclusively while under attack from Margot's withering criticisms of his especially non-genius status.

6. Gil in Midnight in Paris: Gil isn't very ostentatious with his claims towards genius, but he DOES think he's too good to be writing screenplays AND he thinks he fits right in among the Lost Generation luminaries like Picasso and F. Scott Fitzgerald. His intellectual self-regard is tempered somewhat by comparisons to the far more pseudo-intellectual character played by Michael Sheen.

4. Dignan in Bottle Rocket: Owen Wilson's first film role helped to set the template for his characters' delusions of intelligence. It's not quite as whimsical as many of his subsequent roles would be, but Dignan has a famed 75-year heist plan and he's sure he's mapped out every inch of it. He considers himself, if not a criminal mastermind, than at least a cunning criminal strategist. His fate by the end of the movie proves he's neither.

3. Vann Siegert in The Minus Man: In what is probably Wilson's most serious role, he plays a serial killer who sticks to (or at least tries to stick to) a rigorous process to avoid detection. That's a man who's pretty certain in the advantages that his intelligence afford him.

2. Francis Whitman in The Darjeeling Limited: Francis assumes his plan to reunite his brothers -- and later with their mother -- will work because he's planned it perfectly. He's even brought his assistant along to make sure everything is on schedule. Francis is tragic and obviously not nearly as together as he claims to be (this is obvious by one look at his bandaged face), but boy will he continue to try to fool you anyway.

1. Kevin Rawley in Meet the Parents: The best thing about Kevin is that it's practically impossible to tell whether Kevin's boundless confidence in his own ability is overblown or not. He certainly seems to be a skilled volleyball player and self-taught whittler -- that Chuppah looks really nice before Ben Stiller burns it down. There may well be no end to Kevin's talents, and he's incredibly aware of all of them. Maddeningly, he's not even a jerk about any of it.