Familiarize yourself with some of horror's most exciting new voices before they open Tribeca 2016's Midnight section. 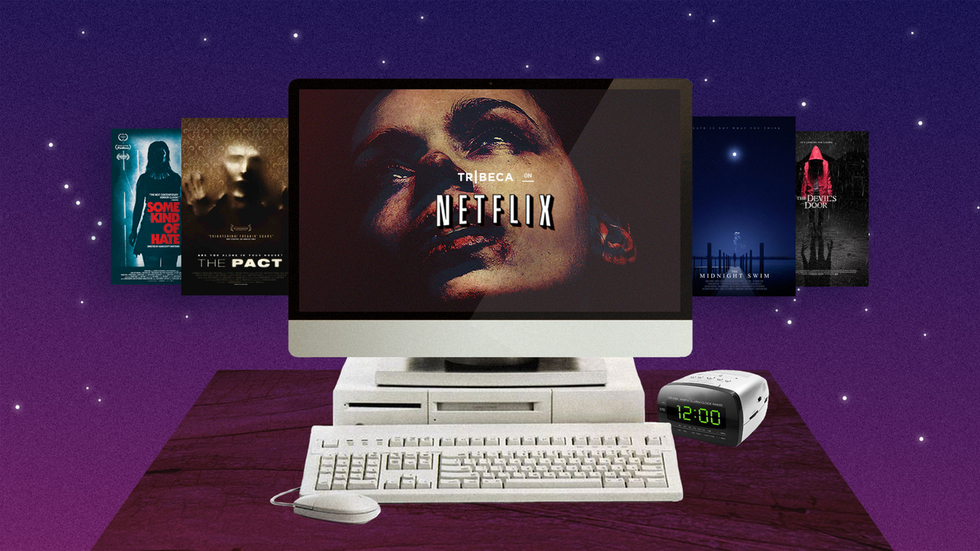 By watching a new horror omnibus, adventurous viewers get first dibs on calling who's got next in genre cinema. Also, a cinematic kitchen's sink packed with bite-size scares. In other words, it'd be foolish to miss Holidays when it makes its world premiere at this year's Tribeca Film Festival. One of the filmmakers involved with the eight-segment-deep anthology is Kevin Smith, who's already one of the indie scene’s biggest names. But the rest of the Midnight section's opener's participating directors have a ridiculous amount of ready-to-be-tapped potential.

The concept behind Holidays is ingenious: Eight horror storytellers apply twisted spins to eight different holidays, which are assembled chronologically, kicking off with "Valentine's Day" and concluding with "New Year's Eve." To the directors' credit, none of the shorts take any obvious approaches—there's no homicidal Santa Claus, mutant pumpkins, or an undead George Washington in a "President's Day" entry. Whether through deeply exploring their respective day's mythology or zoning in on a traditionally overlooked part of the day, the Holidays directors have made consistently surprising and uniformly depraved odes to those bolded titles on calendars.

Before experiencing all of Holidays' madness, catch up with the directors' earlier buzz-setting flicks. Here's a guide to watching their head-turning past work online right now.

The Holidays producers were smart to begin the film with "Valentine's Day," written and directed by collaborators Kevin Kölsch and Dennis Widmyer. For the last two years, horror fans have been eager to see how the duo would follow up their excellent 2014 debut, Starry Eyes, a demented fusion of David Lynch's distorted view of Hollywood and David Cronenberg's body horror, all with a nice dose of the occult. The revelatory Alexandra Essoe plays Sarah, a struggling actress who's willing to literally sell her soul to become a movie star, and her descent into both madness and destruction is lively, darkly funny, and horrifically gruesome. You'd be hard-pressed to find many recent horror debuts as strong as Kölsch and Widmyer’s Starry Eyes.

Similarly head-turning was 2015's The Midnight Swim, which caught everyone off-guard at the 2014 Fantasia Film Festival and then gradually amassed an outspoken cult following through its limited theatrical release last year. It's a powerfully feminine story about three sisters who reconnect following their mother's mysterious death, share stories about the local witch-based mythology surrounding their childhood home, and eventually succumb to the area's powers. As constructed by rookie writer-director Sarah Adina Smith, The Midnight Swim never takes the obvious route towards its dizzying and existential conclusion. In a genre that needs more women's voices, here's the should-be-more-common case of a genre flick that's as concerned with its unsettling qualities as it is with multi-faceted female characters.

Even though Wes Craven's meta slasher classic debuted way back in 1996, it's still almost impossible to make horror's stalk-and-kill sub-genre scary in a post-Scream world. But every now and then, an inventive director figures out a way to breathe life into the figurative corpses of Jason Voorhees, Freddy Krueger, and Michael Myers. Last year, Adam Egypt Mortimer fit that bill. Set a camp for bad kids, Some Kind of Hate is a brutal and admirably humorless slasher that features a killer unlike anything that's preceded it: Moira (played by Sierra McCormick), the ghost of a suicide victim who was bullied while she was alive and spends her afterlife murdering disreputable folks by hurting herself—if she cuts her own throat, for instance, her target’s neck magically rips open. One can imagine Freddy Krueger giggling with perverse glee while watching Mortimer’s morbidly innovative bodycount exercise.

The Pact (2012)
Director: Nicholas McCarthy (Segment: "Easter")
Where to watch it: Netflix

With only two films to his name so far, writer-director Nicholas McCarthy has established himself as an anti-formula storyteller. He takes familiar concepts and overused horror tropes and unpredictably remixes them, particularly in his Holidays segment, "Easter," which features the twisted kind of Scary Bunny that could only come from his warped mind. The purest example of McCarthy's singular gifts remains The Pact, though, his 2012 debut that upends the haunted house motif. Annie (Arrow's Caity Lotz) reluctantly heads back to her childhood home to investigate the disappearance of her sister; before long, she’s exposed to a variety of supernatural curiosities. But just when you think you know where The Pact's ghostly vibes are going, McCarthy pulls an audacious 180 and reveals the film to be something else entirely.

At the Devil’s Door (2014)
Director: Nicholas McCarthy (Segment: "Easter")
Where to watch it: Netflix

McCarthy's follow-up to The Pact is even more audacious. Essentially a demonic possession film, At the Devil's Door attacks what could’ve been a typical Satan saga with swinging-for-the-fences boldness. Hannah (Awkward's Ashley Rickards) begins experiencing disturbing phenomena after her new boyfriend introduces her to redneck shaman; at the same time, real estate agent Leigh (Catalina Sandino Moreno) encounters unexpected difficulties while trying to sell a quaint suburban home. How McCarthy weaves Lucifer into those dual narratives isn't always clean—at times, At the Devil's Door’s plot veers towards incoherence. But his steadfastness with the film’s abandon-all-hope vibe and genuinely creepy imagery enhances the script's faults. As an uncompromisingly bleak mood piece At the Devil's Door, knocks hard.

While the British anthology series Black Mirror has received widespread acclaim, and deservedly so, the Canadian anthology show Darknet has existed below most people's radars on Netflix for the last two years. All good, though—whenever folks discover Darknet, they'll be knocked sideways. Its episodes are directed by different filmmakers, including Bryan Fuller's go-to Hannibal director Vincenzo Natali, and interweave multiple plots into their 30-minute stretches, Pulp Fiction style.

Well, except for the fifth episode, which also happens to be Darknet's finest half-hour. Whereas the other five episodes are multi-plotted, Episode Five sticks to one story, that of a jittery office worker (Carlyn Burchell) whose email is suddenly flooded with video clips of homicides and whose mailbox contains a postcard warning her that something bad is going to happen in a couple of days. It’s a dynamite calling card for writer-director Anthony Scott Burns, the least known of Darknet's directorial crew but also the most impressive.

Without saying too much about Burns' Holiday contribution, "Father’s Day," just know that he achieves something comparable within the film's roster of directors.

Although there have been numerous indie horror anthology over the last few years, Holidays has something going for it that none of its predecessors have: a virtual reality segment.

"Christmas," directed by Scott Stewart, was shot both traditionally and with 360° portions, the latter enabling Stewart to produce a standalone VR component that will also premiere as part of Tribeca's first-ever Virtual Arcade. (Read more about how Stewart tapped into VR's horror-specific potential here.) Stewart's background explains why he'd be so technologically progressive. Prior to directing the major-studio-backed fantasy/horror flicks Legion (2010) and Priest (2011), he was a visual effects artist who worked with Tim Burton (Mars Attacks!), Steven Spielberg (The Lost World: Jurassic Park), Robert Rodriguez (Sin City), and Marvel Studios (Iron Man).

Stewart's best film, however, is reasonably light on the CGI, or at least the obvious CGI needed to turn Paul Bettany into the airborne, knife-wielding Archangel Michael. A hybrid of the "haunted house" and "alien invasion" sub-genres, Dark Skies stars Keri Russell as a mother and wife whose family is being terrorized by some mean-spirited extra-terrestrials. Not dissimilar to how Robert Eggers made cackling hags seriously frightening again with The Witch, Stewart gives otherworldly invaders back the scariness they've mostly lacked since 1993's Fire in the Sky. Its only peer in that department is Jason Eisener's "Slumber Party Alien Abductin" from the horror anthology sequel V/H/S/2, which screened at the 2013 Tribeca Film Festival.