The MILDRED PIERCE director's elegant and romantic drama is every bit as unshakable as its post-Cannes reviews have suggested. 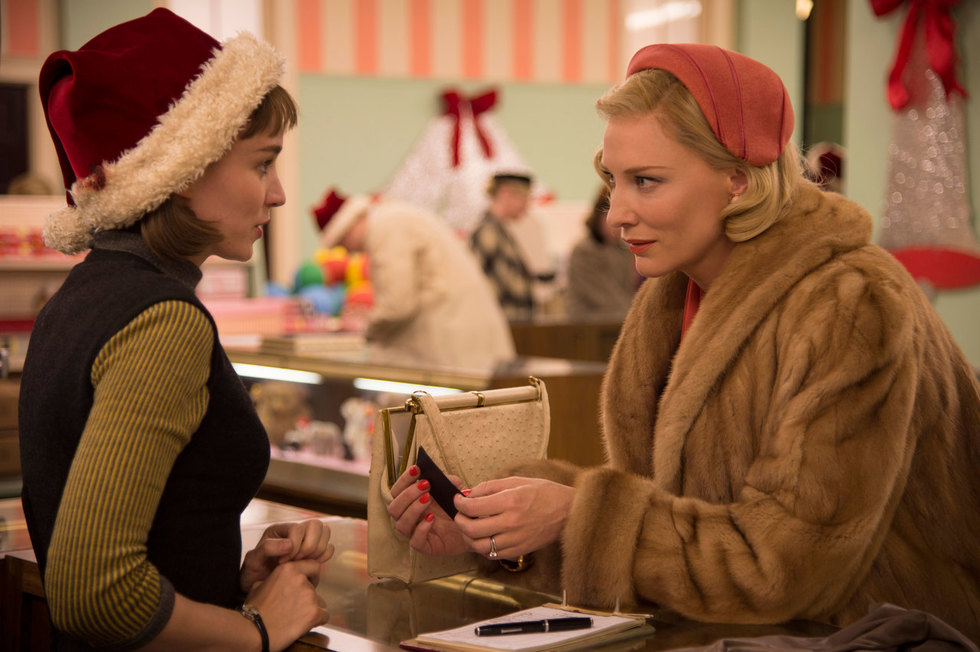 Carol's emotional wallops don't immediately register. An adaptation of Patricia Highsmith's seminal 1952 novel of lesbian love, The Price of Salt (published under the pseudonym Claire Morgan), the film patiently brings its characters' passions to a simmer. It's directed by Todd Haynes, back in his Far From Heaven zone, with gorgeous precision but also meticulous detachment. Haynes and screenwriter Phyllis Nagy know that the best way to tell a story about suppressed desires is through a similar suppression. But like a rotund belly stuffed into skinny jeans, Carol's mounting tensions gradually erupt.

Cate Blanchett, never better, plays the eponymous Carol, a suburban New Jersey divorcee in the 1950s who loves her young daughter but can't connect with her ex-husband, Harge (Kyle Chandler, still reliably great), due to his knowledge of Carol's past same-sex affair with her best friend, Abby (Sarah Paulson). Stuck in a life of non-existent intimacy, Carol randomly meets the much younger and temporally fragile Therese (Rooney Mara, all understated force) at a Manhattan department store, ends up grabbing lunch with her, and quickly discovering that there's a shared physical attraction between them, one that's mutually destructive.

While Carol's trying to salvage her family life, Therese is finding herself amidst a blandly vanilla and safe boyfriend (Jake Lacy), a closed-off and somewhat alienating demeanor, and seemingly unattainable dreams of becoming a professional photographer. Her rinky-dink camera—a sign of Therese's humbleness in contrast to the well-off and opulent Carol's swanky Packard automobile—tends to focus on "trees and windows"; a friend advises her to start "caring about humans" more when taking snapshots. It's no coincidence that Therese's best photograph is a voyeuristic one of Carol.

Haynes, on the other hand, is wholly concerned with the humans inside his camera's frame. Thanks to his actresses' razor-sharp expressiveness, Haynes delivers a uniquely muted eroticism. For much of Carol, Blanchett and Mara suggestively convey the romance. Long pauses fill their conversations and trigger yearned stares and glances that are electric; Mara elevates the softly spoken "yes" into a powerfully carnal response; the moments where Blanchett merely touches Mara's shoulder could, and should, win the MTV Movie Awards' Best Kiss prize despite not involving a single puckered lip.

Even when Carol and Therese finally realize their desires beneath a hotel room's sheets, their euphoria is short-lived. By design, Carol is a love story in which the L-word is elusive to all involved, especially those who are unwilling to work for it—the viewers, most of all.