The 'World War Z' star is playing the ultimate family man. So what's Brad Pitt's track record when it comes to playing suitable romantic partners? We've gone and ranked 20 of his most notable roles. 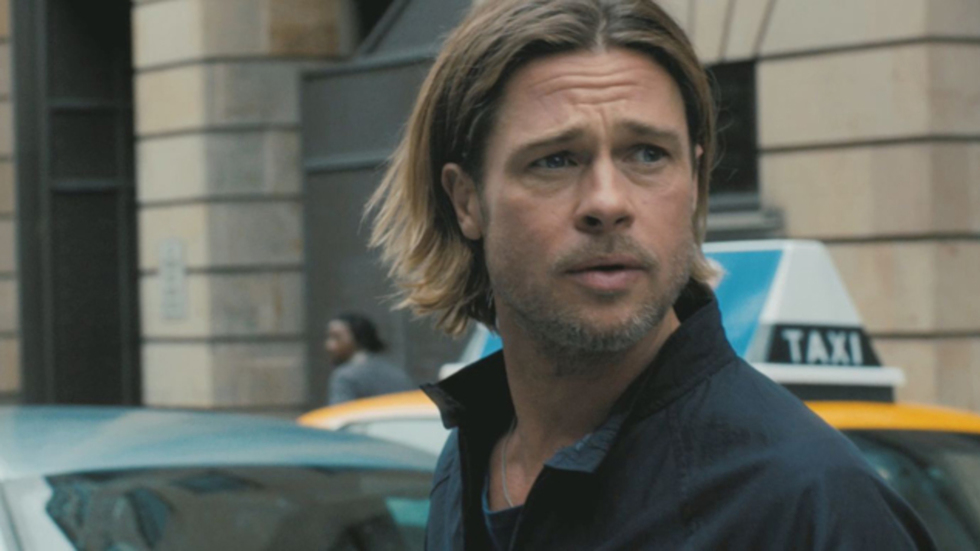 19. 12 Monkeys: There's really no debate here. Jeffrey Goines is an incredibly poor choice for romantic partner. He's a spoiled Daddy's boy turned drooling psycho turned bug-eyed eco-terrorist. And his hair was only passably cute while he was in the asylum.

18. Burn After Reading: Chad Feldheimer is very cute and, thanks to all the time he spends working at the gym, quite fit. But he's also dumber than air and that dumbness ends up leading him to some bad, bad places. That's drama you don't need.

17. Fight Club: Real talk time: I was originally going to rank this at #20, because honestly: Tyler is an aggro anarchist/murderer/terrorist/figment of the imagination, and he ends up really terrorizing Helena Bonham Carter. And yet ... he's really good in bed, you guys. All things being equal, that's a tiebreaker in Tyler's favor.

16. Inglourious Basterds: Lieutennant Aldo Raine follows through on his plans. That is a very good quality in a guy. He also has a very specific moral code that he sticks to. Also a good quality. But he's really into scalping Nazis, and you're probably looking at two weekends a month minimum where he's going to go on weekend Nazi-scalping trips with his buddies. Also: that awful accent.

15. Seven Years in Tibet: Well, he's incredibly attractive, and as a mountaineer, he's got an interesting job that lends itself to fun anecdotes at parties. But he is willing to spend upwards of seven years on one bros weekend in Tibet. Also: maybe a Nazi?

14. Interview with the Vampire: Louis holds on to his moral code long after his vampire nature called for him to turn to murder. He also is a great father figure to young Claudia. But he's never going to get over Lestat, no matter how intensely you long for him, Antonio Banderas.

13. The Curious Case of Benjamin Button: So, okay, yes, the reverse-aging thing is a weird problem that probably deep-sixes any notions of long-term partnership. But if you're a serial monogamist looking to spend the sun-kissed mid-portion of your life with a stone-cold fox, Benjamin Button is your guy.

12. Meet Joe Black: Very handsome, looks great in a suit, incredibly kind. Honestly, at some point, there are enough good qualities to outweigh the fact that he's death incarnate.

11. The Tree of Life: The classic push-pull of 1950s Americana: Mr. O'Brien is a stand-up guy and a good provider for his family. But "emotionally distant" doesn't begin to describe it, and he's really harsh on his kids. Do YOU want a child who speaks in whispering, elliptical voiceovers?

10. The Assassination of Jesse James By the Coward Robert Ford: A renowned criminal, sure, but also -- as evidenced by this film -- a soulful man and a loyal partner. The fact that he's so clearly doomed is a drawback, for sure.

9. The Mexican: Controversial choice since both the film and Pitt's character, Jerry Welbach, were kind of bumbling failures. But he means well, and he and Julia Roberts have a fun kind of chemistry.

8. Troy: Achilles is a physical specimen the likes of which are rarely rivaled even in Brad Pitt's formidable filmography. He's a warrior and a passionate lover and ... well, a son of the gods. Sure, fine, he has one glaring weak spot, but if you can convince him to start wearing shoes that cover his heels, you'll be set.

7. Thelma & Louise: I know what you're saying. "But Thelma, J.D. stole all your money and skipped out before the sun was up the next morning!" Point taken, Louise. But he said it would be different this time! And I, for one, am inclined to believe him.

6. Seven: David Mills is kind of distant, sure. The kind of husband whose wife isn't quite sure she should tell him that they're going to have a baby and instead tells Morgan Freeman. But a) who wouldn't confide in Morgan Freeman? And b) who wouldn't want a man who loved you enough to kill Kevin Spacey in cold blood if he ever finds your severed head in a box? THAT is love.

5. Mr. and Mrs. Smith: Another controversial choice, since John Smith spends more than half the movie trying to kill his beloved wife. But as the film shows, they are a perfect match for each other, and just so, so smoking hot.

4. Ocean's Eleven: Rusty is smart, funny, clever in a devious (but incredibly lucrative) way, and he's got an awesome group of friends. And he's probably looking to one-up Clooney and Julia in the whirlwind-romance department.

3. Moneyball: Pitt's Billy Beane is a good dad, a hard worker, and the kind of guy who's not afraid to admit when the old ways aren't working and try something new.

2. World War Z: A husband who will stand by you and your children through the zombie apocalypse is pretty much the definition of an ideal mate. It's a good bet that phrase has actually been included in some people's wedding vows.

1. Legends of the Fall: War hero. Family man. Sun-kissed golden boy of the American plains. Soulful (if troubled) world traveler. ...Okay, fine, a girlfriend-stealer, but look at that face.