The 15 Best Horror Movie Trailers Since 2000

Sometimes all that filmmakers need to scare the pants off of viewers is a well-made tease. 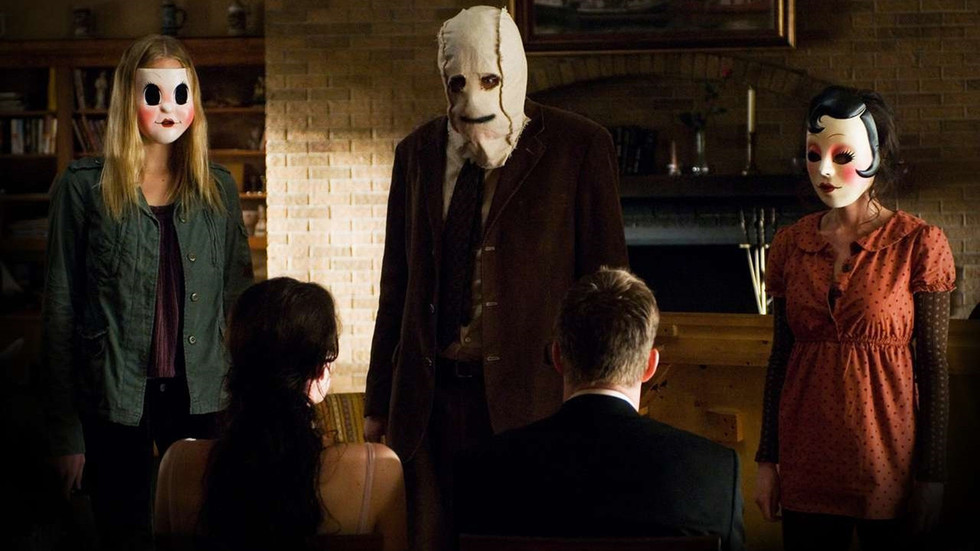 One of the greatest images in horror movie history is also one of the simplest: a geyser of blood seeping through closed elevator doors and cascading down an ornate hallway, the camera fastened in a steady position, the blood flowing over the lens and turning the entire shot crimson. There's no exposition, no dialogue, or any characters whatsoever. There's only a hotel's interior and gallons of red stuff, and it's terrifying and mesmerizing in equal measure. It's the trailer for Stanley Kubrick's The Shining, the kind of brave and assured movie trailer that they just don’t make anymore.

Instead, they make horror previews that essentially give away whole plots, ruin most of the money-shots and big scare moments, and, in the case of the unbelievably misguided Quarantine trailer, end with the actual movie's f'n ending! Studios and distributors want to ensure that their funds return, so they show audiences every single about their films, as if to say, "Here, this is what you’ll get—you nor your money won’t deceived." In the process, they destroy the movie's senses of mystery, surprise, and genuine scariness.

Every now and then, though, someone gets it right. Clever, innovative ideas enter the mix, giving upcoming genre releases an exciting appeal—and in some cases ultimately besting the movies themselves. Here, we've compiled the 12 most memorable trailers unveiled over the last 15 years, some of which are worthy of being mentioned alongside the classics previews for old-school gems like The Exorcist and Alien. And the biggest shock of all? They’re predominantly for big studio releases, not smaller-scale indie features.

Are they on The Shining's bloody hallway’s level? Have a look and decide for yourself.

The best horror movies use sound design to their advantage—think John Carpenter's score in Halloween, or the whispered "cha cha cha" chants in the Friday the 13th movies. The trailer for The Strangers follows this same approach, utilizing one of the film's secret weapons: that skipping-vinyl loop of Joanna Newsom's "Sprout and the Bean." It's a strangely hypnotic musical cue that deepens the overall creepiness following the quietly unnerving shot of the masked intruder standing behind Liv Tyler in silence.

Panos Cosmatos' Beyond the Black Rainbow is a true sci-fi/horror head-scratcher, but in the best ways possible. With its bombastic electro score and lushly colorful, otherworldly visuals, it looks and feels like a lost artifact from either the '70s or '80s, perhaps a NASA laboratory document gone awry or a something probed straight out of Stanley Kubrick's wildest nightmares circa 2001. The film's trailer awesomely embodies that feeling of intergalactic disorientation, signaling a unique experience that’s as cinematic as it is enigmatic.

Warner Bros. and director James Wan knew they had a high-quality product on their hands with The Conjuring, and their confidence manifested itself greatly in the eventual summer 2013 box office smash's first teaser. Instead of the usual cavalcade of jump-scare beats and overly generous story dumps, it focuses on one specific sequence that’s both undeniably freaky and encapsulates the movie's overall elegance and mood. It's just Lili Taylor playing a seemingly harmless game of "Hide and Clap" with an unexpected participant, and it's supremely effective.

This Michael-Bay-produced Friday the 13th remake is, in and of itself, a failure. The kills aren't imaginative, the story's weak, and nobody wants to see Jason keeping women prisoners in an underground bunker. But its teaser should be the template for how to convince genre die-hards that your unnecessary remake might actually be worthwhile. Paying homage to 1984's Friday the 13th: The Final Chapter's audacious trailer, Friday 2009's teaser builds into a "kill count" ticker that basically shows how each of the film's victims will die. The actual movie never stood a chance at matching its success.

Writer-director Adam Green's mission in making Hatchet was simple: bring the fun and over-the-top brutality of 1980s slasher movies back to post-2000 horror cinema. Three films and one beloved new-age genre icon (Victor Crowley) later, he's done so with the impact of a rusty hatchet to the skull. It all traces back to the film's old-fashioned trailer, fueled by a little girl reciting Crowley’s campfire-tale-like origin story and the woodland setting that brings Jason Voorhees' Camp Crystal Lake haunt to mind.

Not unlike the above The Strangers trailer, this excellent It Follows preview is all about its audio strengths. It lets writer-director David Robert Mitchell's film's amazing score, created by Rich "Disasterpeace" Vreeland, dominate the 150-second run, and, as a result, evoke an unmistakably '80s vibe, right down to the red title font that’s reminiscent of Wes Craven's A Nightmare on Elm Street.

A surprise hit at the 2012 Sundance Film Festival, the indie found-footage horror anthology V/H/S is a punk-rock blast, roaring with the anything-goes energy of genre filmmakers given total freedom to get as wild as possible. The film's red-band trailer captures that fun-loving recklessness perfectly. It's frantic, gruesome, disorienting, and a little bit dangerous.

Up until its closing moments, the trailer for the great 2001 haunted house flick The Others is an above-average preview without any real knockout punches. The film looks solid, sure, but not all that much different from other Hollywood ghost stories. But then comes the final scene. Kidman slowly walks toward someone in a darkly lit room. She think it's her young daughter since she hears her daughter's voice, but it's definitely not her offspring beneath that white veil. The payoff remains one of modern horror best sight gags.

French co-directors/husband-and-wife duo Helene Cattet and Bruno Forzani are unabashedly obsessed with the Italian giallo films of the 1960s and '70s, those beautifully shot pre-slasher stalk-and-kill genre movies made famous by directors like Mario Bava and Dario Argento. Both of Cattet and Forzani's features, Amer and The Strange Colour of Your Body's Tears, are unsubtle love letters to giallo, shot like them and visually and sonically constructed as intentional copycats. And both films are excellent, as are their impeccably on-brand trailers, which prep viewers for their Italian-minded cinema as forcefully as the filmmakers handle their homages.

Before anyone saw Zack Snyder's remake of George Romero's zombie masterpiece Dawn of the Dead, nobody in their right minds actually wanted a Dawn of the Dead remake. Prior to directing movies, though, Snyder was an advertising industry veteran, so he knew how to sell a product. That expertise played directly into his Dawn’s first trailer, which needed to pull off the Herculean feat of turning millions of horror fans into believers.

That’s exactly what this terrifically constructed trailer does, especially with its closing sea of zombie hands that looks and feels like a combination of Day of the Dead's opening scene and the Poltergeist TV effect. It also achieves something even more important: it demonstrates how Snyder's film honors Romero's 1978 classic while differentiating itself substantially.

First-time feature director Fede Alvarez certainly felt Snyder's kind of pain before the release of his Evil Dead, the glossy, money-filled remake of Sam Raimi's grimy, low-budget 1981 splatterfest. Fortunately for Alvarez, though, he had Raimi and the whole original Evil Dead team in his corner, and Spider-Man franchise helmer Raimi’s involvement gave the production the cache it needed to deliver on what Evil Dead fans love: extreme gore.

So it came as no surprise that Alvarez's film's initial teaser overloaded its CGI-free bloodshed. The director and O.G. franchise star Bruce Campbell premiered the trailer at the 2012 New York Comic-Con; the crowd went apeshit over it. Once Jane Levy's possessed character started slowly ripping her tongue in half with that knife at the trailer's end, fans were on Alvarez's side.

Kevin Smith needed Red State's teaser to accomplish a whole lot. Known for his vulgar comedies, like Clerks and Mallrats, with their sex-obsessed comedy and fanboy-friendly pop culture insider jokes, Smith took a hard 180 with Red State, a psychological horror flick about a cult of religious fundamentalists—frankly, people didn’t know what the hell to expect. But when the film's trailer premiered online, both Smith’s followers and haters were left stunned.

It's an exercise in duality—the imagery is viscerally chaotic, yet the sound of co-star Michael Parks' monologue is calm, almost soothing. Unfortunately, the full movie didn't live up to its preview's potential, and Smith's other attempt at nihilistic genre, last year’s Tusk, further cemented the comedic filmmaker's horror deficiencies. As it stands, Red State's trailer is scariest thing Smith has ever made—the awful Cop Out notwithstanding.

These trailers are cut from the same blood-drenched cloth. With the previews for their modernized versions of The Texas Chainsaw Massacre and The Hills Have Eyes, directors Marcus Nispel and Alexandra Aja, respectively, had to convince horror fanatics that Tobe Hooper and Wes Craven's '70s-era originals were in good hands.

Thankfully, both films rank on the positive end of the horror remake scale, with Aja's The Hills Have Eyes being one of the best genre reboots ever. And both trailers impressively acknowledge their predecessors' carnage and intensity, proving that Hollywood sheen doesn't always have to rid hardcore horror of its edginess. Bonus points go to the Texas Chainsaw 2003 trailer's smart and well-placed use of the original movie's piercing shrieks.