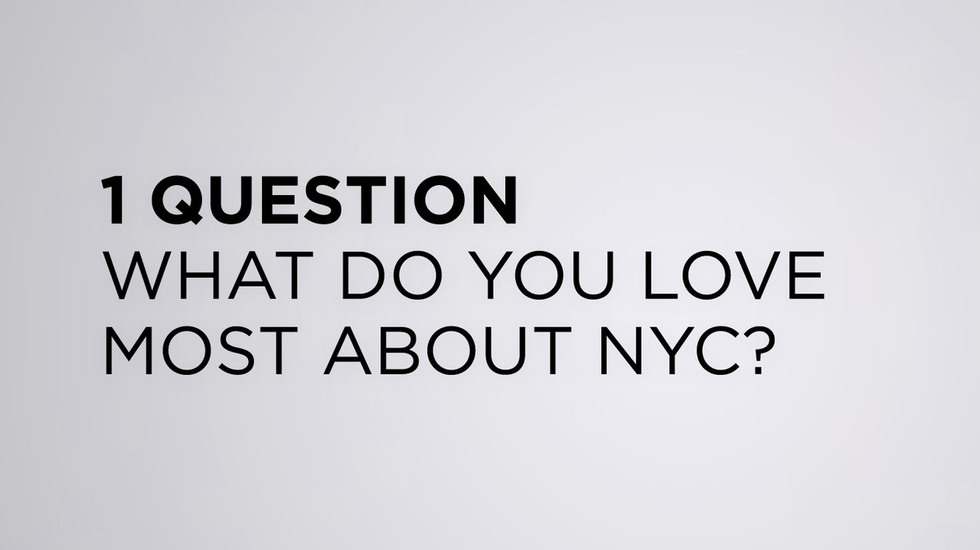 We Asked the TFF 2013 Filmmakers: “What Do You Love Most about NYC?”

BY Karen Kemmerle
It’s no secret. We love New York City and so do our TFF 2013 filmmakers.

Is there any better time to be in New York City than in the spring? While this year’s Festival filmmakers were between screenings, events, and panels, they were able to visit their favorite New York shops, museums, nightspots, and theaters, and even the odd deli or two. Here’s what a few of them had to report.

"The Yankees, the Nets, Lincoln Plaza Cinemas, Brooklyn Botanical Garden, Madison Square Park, MOMA, BAM, Giorgione on Spring Street, Faros in Park Slope, and the olives and nuts they give you at the Sofitel New York bar."

"What I love most about NYC is that I’m here and not anywhere else. That’s what I love, at least for the time being."

"Being a native New Yorker, I love the memories that so many blocks of the city encapsulate for me. I love nothing more than being able to stroll around, especially in the spring and autumn, while recollecting snatches of my childhood and post-collegiate years. And then I love being able to return home to Los Angeles, where you never walk, there are no memory markers and the weather is always in the 70’s."

"That’s a tough question. I love this city and everything about it. Anything can happen at any moment. But I have to say is that delis are the best part."

"Trouble, or the potential for it, is always at your fingertips. The good kind of trouble. It keeps me inspired."

"The energy. I love it more than anything because by nature I think can be a little introverted. One of the best things I did was to move over here. It woke me up a little bit. I just love that anything can happen here."

"I never lived anywhere very long when I was a kid; we moved around all the time. I moved here when I was 19, and I never felt in all the cities that I lived in, which was seven or eight, I never felt that anywhere was home until I moved here. And no city was a kind of tough, magnificent, big, messy friend of mine, no city felt like a living being quite like New York. Its arms kind of elbowed me sometimes and hugged me other times. Every time I get off the plane, I tell my wife that by the time I walk out of Kennedy, I’m a little taller, better looking, and smarter. "

"The diversity of people, talent, experience, and food. Having it all at your command is an amazing opportunity. I think everyone at some point in their life should live in New York City and experience it. It expands you as a human being."

"What I love about New York is the sometimes-delusional ambition and energy that everyone has. Every person that comes to New York with a dream is like Han Solo before he takes the Millennium Falcon into the asteroid field and says 'never tell me the odds.' This especially applies to people who want to make films."

—Rob Meyer, A Birder’s Guide to Everything

"Around the clock access to the most creative and ambitious people I’ve ever met.

"Every once in a while you stumble on one of those long lost fossils of New York—the place where you could find anything. Like the button shop on the Upper East Side, or the hobby train shop tucked away upstairs. It’s like traveling back in time."

"There are so many people doing so many amazing things in NYC. It’s inspiring. I am constantly meeting people who are unique and interesting, and who are accomplishing things I am in awe of."

“The fact that it has its’ own weird. The city is unlike any other place on the planet.”

"Whenever I go to New York I feel like I should bring my passport. I feel like it’s a different country, I just love it. There’s at least a hundred of everything."

"The energy. The rush of life on the street.  The subway. The nightlife. The theater. Seeing my friends from my NYU days. The food!!"

"For me, it’s memories. I lived in New York for almost three years, years ago. I look back on it as a really beautiful time. And even though New York has definitely changed since I was here, it’s still nice to walk around. I don’t know, there’s just something about New York  if you lived here for any amount of time. The city just stays with you forever. New York is eternal; it just has that feeling. It’s always a part of you."

"I think the thing I love about NYC most as a person is the diversity. I grew up in a small town not like New York at all and had this constant outsider feeling—that my family was an outsider or I was an outsider. Coming here, it was just like I’m in lockstep with anyone walking down the street."

"I love being in a vertical city. In Los Angeles (where I live), nobody walks, takes the train or goes to the park. I like nothing more than exploring a new neighborhood, grabbing a sandwich and sitting on a bench to people watch. You can learn so much about human behavior this way."