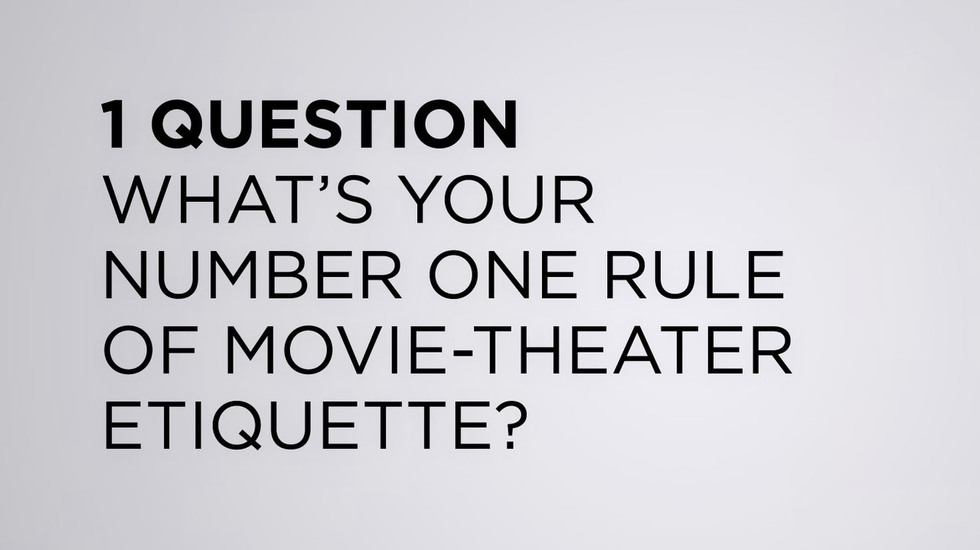 We Asked the TFF 2013 Filmmakers: “What’s Your Number One Rule of Movie-Theater Etiquette?”

BY Karen Kemmerle
Are you guilty of being a bad audience member? Our TFF 2013 filmmakers share their movie-theater commandments that everyone should follow.

While we love seeing movies in the theater, we’ve learned that one bad patron in a nearby seat can ruin the whole experience. Describing noisy eaters, loud talkers, and cell phone abusers, this year’s Festival filmmakers provide us with some rules of movie-theater etiquette essential for a pleasant movie-going adventure.

"I love previews! I know people are still finding a seat and settling in during this time, but I always wish people didn’t talk during the previews, because they’re just as much a part of the theater-going experience for me."

"Only open the food you snuck in during loud scenes."

"No talking to the film. It’s ok to blurt out an expletive uncontrollably when something unexpected or startling happens, but if what you’re saying is more then a few words, you’re in direct violation of this rule. Best to keep it to yourself or write about it in your upcoming blog entry."

"Turn off your GD phone."

"Don’t check your phone in the theater. It’s really distracting for someone next to you."

"Don’t interfere with the senses."

"I think I would say stop talking once the trailers have ended. Also, know your surroundings. My friends and I have a joke that we could be in a completely empty movie theatre, and the tallest person in the world will sit right in front of me. Have some seat courtesy! That’s one of my biggest pet peeves. And don’t bring outside food into the theatre. I’ve seen people with full course meals. It’s not cool."

"I would say talking but I really love going to the right kind of movie where people are yelling back at the screen. I like to go to horror movies that way; it’s the only way I can go through them because I get so visually psyched. I think people have a willingness to talk on their cell phones in movie theaters in a way that makes me want to strangle them."

"I guess no texting in the film. Like they say at the very beginning, it’s so annoying trying to watch a film and everyone’s LEDs are out. It’s really awful. I will say there have been some emergencies where my phone kept vibrating in my pocket where I’ve had to leave the theatre and take a call in the lobby, but it’s so annoying when people just casually answer."

"If your friends get to a movie early to save you a seat, don’t be too late. I can’t tell you how stressful I find it to be the one saving someone else’s seat. I feel like everyone who asks me “is that seat taken?” totally hates me. And then, if the movie starts and my friend still hasn’t come, I start to get really resentful. Now that I say this all out loud, I realize this may be more my problem than anything elses."

—Rob Meyer, A Birder’s Guide To Everything

"I’m a bit of a stickler for NO TALKING."

"Turn your phone off! Completely off. It isn’t just for the other audience members – it’s for you as well. How can you immerse yourself in a movie when you can feel all those messages buzzing in?"

"I have a secret movie theater I go to in Manhattan that is almost always completely empty, so I don’t have to worry about movie-theater etiquette. I just recently saw Django Unchained there during a matinee and I was the only person in the theater. I talked the whole time."

​"Don't ask the filmmaker how much the film cost."

"Well, my movie theater etiquette applies to etiquette in general and it’s just chew with your mouth closed. I eat popcorn, I eat M&M’s, so I just try to be as quiet as possible. Like when I open up my bag of M&M’s in the theater I try to do it during a loud part of the movie so I don’t disturb anyone."

"People who leave before the credits roll should get out quickly and try not to block the view of those of us who like to watch final credits."

"You have to turn off your cellphones. However, if someone sparked a lively conversation over something I did on screen, I could live with that!"

"No talking. After making this feature, I have so much more respect for every film that makes it into the theaters.  We work so tirelessly to make each moment right. Then to have someone chatting away and missing those moments is frustrating. The greatest part of going to the theater is being able to shut out the rest of the world for a couple of hours and just enjoy the experience."