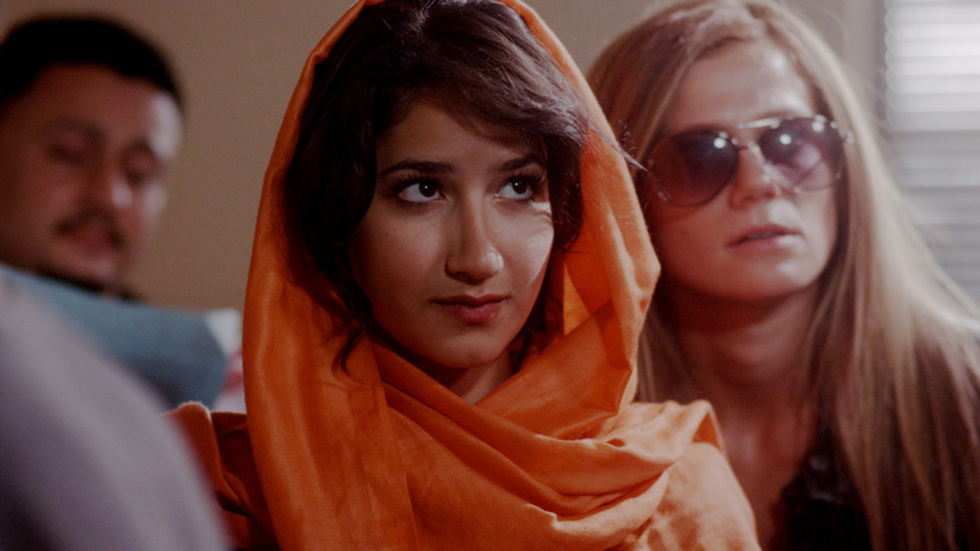 Tribeca: Farah Goes Bang explores so many different genres: the road movie, the sexual coming of age movie, the political film, the buddy movie. Tell us how you decided to tell this story.

Meera Menon: Telling a story about a woman coming of age sexually in her twenties and telling a story about the 2004 election were two concepts that did arise independent of one another, but (co-writer and producer) Laura Goode and I quickly realized that setting the two stories beside one another could be really funny, and that the two journeys could inform each other’s progress in a clever way. The buddy movie aspect is a product of two things that developed as we went along- my friendship with Laura as it was reflected in the writing process, and the very real sense of intimacy developed between the three actresses during filming.

Tribeca: I think it’s interesting that you chose to set the film in 2004 and in the Kerry Campaign, mostly because the audience already knows that the political side of the film is a losing battle. It’s also a time that is neglected because it’s still so relevant, there are issues we haven’t moved on from. What attracted you to that setting?

MM: Laura and I were in our early twenties in 2004, and I think we were particularly wrapped up in the surge of youth driven energy surrounding that political moment. It feels like a moment that is overshadowed by the youth movement of 2008 in how we remember the past decade. And yes, I think the other reason it felt appropriate to set this story about youthful idealism in 2004 was that the major things these girls are concerned about (the war, not finding a job) have not changed. Progress operates at a much slower pace than that. Their idealism is reflected in a line KJ says- “let’s just get this moron out of office so we can end the war.” And I remember sort of really believing that- that if John Kerry won, the war would just end.

I remember sort of really believing that- that if John Kerry won, the war would just end

Tribeca: The “struggling millennial” is a story that we’ve seen more of recently. What do you think separates your three characters from the typical, self-obsessed character that that generation tends to be represented by?

MM: I think we are not judging them as hard as millennials are often judged in TV and movies. Our characters could be accused of existing in a bubble in the same way you describe, but their hearts are in the right place. They want the world to be a better place. They are willing to do something to help in that effort. They are figuring it out step by step, and I think there is a lot to love there.

Tribeca: One of my favorite aspects of the film is that it doesn’t shy away from the fact that girls can be gross. There’s a farting scene, lots of vulgar talk, at one point Farah says: “I didn’t know that girls could emit that kind of odor.” Is that something you emphasized on purpose, or is it just the kind of girls you see?

MM: That is definitely not as conscious, and more of a reflection of the kind of humor Laura and I dig and find funny. And yeah, I think it’s interesting that we don’t question male driven comedies that find their kicks in the “poop joke” folder.

Tribeca: As far as working in Farah’s ethnic roots, why is that identity so important to highlight?

MM: I think Farah’s ethnic identity is important to highlight, particularly in the way we try and highlight it. Those markers (the scarf, the eyebrow plucking, the back story about her parents), all inform who she is. At the same time, it was important for us to distinguish that none of these things explain why she struggles with the particular issue she has in the film (wanting to not be a virgin). It generally drives me crazy to see brown characters in film and TV and the main point of tension in their character arc always has to be directly involved with their ethnic roots.

That being said, its presence in her life is undeniable, and makes an appearance once in a while. Farah can’t just wear a scarf on her head the way Geena Davis does in Thelma and Louise. The scarf thing in particular is an illustration of how she inhabits her particularly hybrid identity, the American side on one end and the Iranian side on the other. When she wears a scarf on her head, it makes a statement. I remember when Gwen Stefani would rock bindis back in the 90s (obviously not as loaded or complicated as a headscarf), but I did think...well it looks cool when she does it on me, it would look traditional. I am old enough now to realize that tradition can be cool too.

Tribeca: Another interesting technique in the film was the use of Kerry’s speech excerpts, how were those chosen? Which speeches are they from?

MM: The political speech excerpts were drawn from archival material- we searched for relevant sound bytes to the particular point in the journey in which they are placed. It was definitely important to try and use some of this material, because of the way in which the world becomes saturated with this type of soaring rhetoric during a presidential campaign. It is impossible to not be surrounded by the voices of the election at all times, especially in the era of the 24 hr news cycle, which felt like it kicked in a particularly high gear around 2004. The theater of a presidential election can often get boiled down to sound bytes, and that tends to be how we experience its antics. It’s like this past election - the sound captured of Mitt Romney saying that 47% of the population consider themselves to be “victims” was far more valuable than the video itself.

Tribeca: On your website you have a “Cherry Bomb” blog, where girls can share the story of their first sexual encounters. I also noticed that the blog is password protected and semi-private. Is that openness about sex and the first time something that you want to promote?

MM: The blog was created during our Kickstarter campaign - Laura and the co-editor of the blog, Neelanjana Banerjee, curated the site and gave special access to it if you donated $25 or more to our campaign. It was a way to get people engaged and excited, but I think it became a real indicator on how varied people’s experiences losing their virginity actually are. I think we are very used to seeing the same type of story over and over again, where sex is this great unknown that provides the answer to all of one’s desires. It makes us somewhat desensitized to how complicated the experience can be for most people, and how the questions presented in trying to understand one’s sexuality take a lot longer to answer than just one experience can provide.

Tribeca: It’s sometimes hard to tell how much the main characters (except for Roopa) really care about campaigning, do you have any goals about inspiring political activity in young people?

MM: In telling a story about young people trying to make a change, I think it was important to show how that desire sometimes competes with a desire to just be young and have fun. KJ and Farah do care about Kerry winning the election, they are just distracted by other things going on in their heads and hearts, and they need Roopa to push them into action. I feel like this is very true to how ambition often functions when you are young. It partially comes from within, but it also comes from the energy pushed onto us by the people we choose to bring into our lives. And yes, I do hope the film has a message that encourages young people to care about something, even if one’s heart gets lost along the way. It’s just important to engage with the world in some way, however small. And of course, and have fun while doing it- it’s all part of the process of learning who to be and how to be it.

I am old enough now to realize that tradition can be cool too.

Tribeca: What's your advice for aspiring filmmakers and film students reading our site? Is there one particular lesson that you took away from making Farah Goes Bang that you want like to share?