Tweeting For Equality: Lina Esco and 'Free The Nipple'

Lina Esco on her political new film and its social media-backed following. 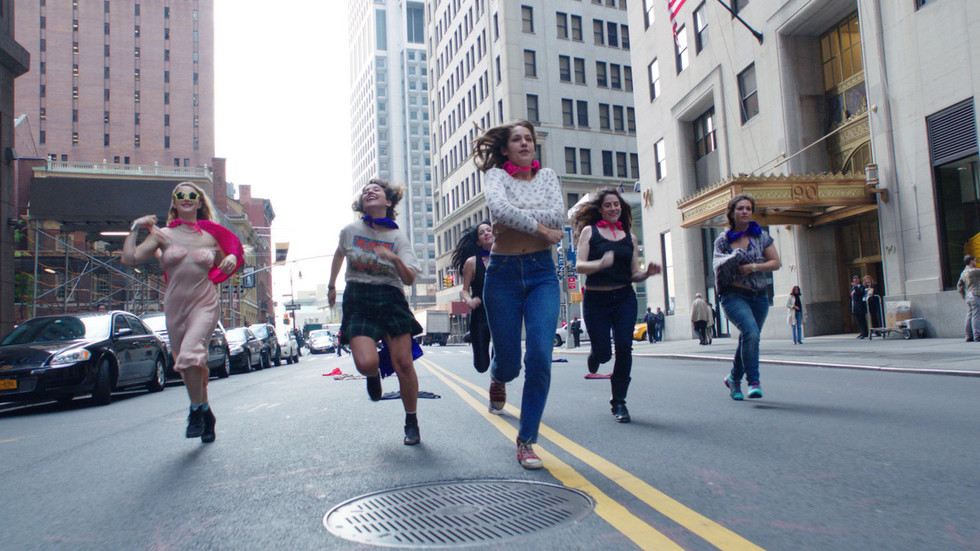 While it's legal (in some states, including New York) for women to be topless in public, this statute isn't always respected - women who bare their breasts in public are often arrested, incorrectly, on indecency charges. Actress and first-time feature filmmaker Lina Esco sought out to address the inequality in question with Free The Nipple, a film that aims for the head and the heart as it charts the travails of a group of young women who band together to start a political initiative that aims to gather public support for the right of women to go topless. Esco herself plays a character helping lead the charge, a journalist named With who goes from objective observer of the group (which is dubbed the Girlrillaz) to advocate for its cause. The film's focus isn't solely devoted to the body parts in question, but rather, allows the issue of female toplessness to stand in as a metaphor for larger issues of gender-based inequality in contemporary society. I had the chance to speak with Esco recently about the film's themes and the fascinating role social media played in its distribution and engagement.

Tribeca Film: The film has a great energy to it - it's about starting a political organization, but the narrative is infused with a kind of energy and momentum that recalls the feeling of starting a business, or a creative endeavor. How did you go about expressing that energy of creativity?

Lina Esco: Well, the irony of it is that this is about life imitating art and art imitating life. When we were making this four years ago we were all broke! Hunter Richard, my partner, he wrote it and we sat together for months fleshing it out, learning about the real topless warriors out there. Were you referring to the idea of the characters starting a movement and observing how it progresses?

Tribeca Film: I want to talk about that, but more specifically, I'm interested in the energy of the storytelling. The process of the characters putting their political organization together is fun to watch, which isn't necessarily expected when observing a process dredged in bureaucratic dealings.

LE: Well you know, I had to make sure the movie didn't make people feel like they were being preached to. I knew that if this was delivered a certain way people were going to feel like they were being preached to. The title is supposed to be funny and engaging, that's the whole point - the film has to be charming so people allow themselves to open up to a dialogue on this subject matter. That was something I was really conscious of while shooting. I had to make sure the actors were being really organic and real, because that is what engages people - seeing an idea grow before their eyes. That being said, you know, you have an idea of how to change the world, which is great, but when you implement it in reality you hit all these obstacles. The women campaigning about this in real life were going to march topless in DC, and that's how we were going to end the film, but then they couldn't get the permit and we had to rethink the ending - while we were in New York, dealing with Hurricane Sandy during the shoot. So there were a lot of connections between what was going on in the story and what was going on in real life - it almost felt like Apocalypse Now and Heart of Darkness. And it was funny - when we finished the film, I started showing it to distributors, and they thought it was great, but they had no clue how to market it. So I started writing about the process for Huffington Post, and that's when Miley Cyrus, my friend, started tweeting about it, and then we started getting attention, and other people started tweeting about it - Lena Dunham, Scout Willis, Cara Delevingne - and that's when distribution companies started calling.

Tribeca Film: It's interesting, you mentioned that you didn't want the audience to feel like they were being preached to. Obviously, when you make a political film, striking the balance between advocating for a message and remaining artful is a difficult thing to do. How did you approach that aspect of the narrative?

LE: I was really conscious of that while we were shooting. I tried to trim a lot of stuff in post that felt too preachy. I watched the film over and over. You know, I'm a rebel, I ran away from home when I was fifteen, I always question it when someone preaches to me - I have an allergic reaction it! So while I was watching the movie I was looking for that, anything that would make someone feel like they were being preached to. This is not about pushing our truth onto people - this is something we do with a lot of passion and love, and if people dig it and want to be part of a dialogue, great, but if they don't, that's okay too. It's very hard to change puritanical mentalities that are so ingrained in American culture. Things change by having conversations. I wanted it to be fun enough that people would want to engage and would want to talk about it afterward.

Tribeca Film: You mentioned Miley Cyrus tweeted about the film, which led to a lot of media attention, and distributor attention after they were initially unsure what to do with the film. What are your thoughts on how social media is impacting independent film?

LE: I think social media is an outlet I'm really thankful for - without it, we wouldn't be where we're at right now. Especially because of the film's title. The future is finding ways to promote films that aren't tentpoles, that are lower-budget films, and you can do that with social media. You're reaching out straight to the people. Being in contact with people via social media, getting emails from teenage girls - boys too - and talking to them about this, hearing about kids writing papers on this, it's amazing. It's amazing to see actual change happen all the time, before your eyes - and we're talking with these people every day. Also, when you're in contact with your audience like that, you're able to know if what you're doing is making an impact. It lets you know that you're going in the right direction. You're in contact with fans every step of the way, not just after the movie is over.

Tribeca Film: To step back for a moment - how did the initial idea for the film come about? What started all this?

LE: It started four years ago. My best friend is an inspiration - her mother was kicked out of a church for breastfeeding her when she was five months old. She's really free-spirited, and I grew up Catholic, shy about my body, and I started wondering why I wasn't as free as she was. Then later on I was in a movie with Miley Cyrus called LOL, and I told the director, Lisa Azuelos, I had an idea for a movie about women challenging laws on going topless in New York and starting a conversation about equality nationwide. Lisa told me she would finance it once the script was ready. I thought she was kidding! But Hunter and I sat down and wrote it, and then Lisa raised a million dollars for us.

Tribeca Film: You talk about growing up shy about your body. You know, there's so much anxiety and shaming regarding women's bodies in contemporary society. What was it like for you to explore that nexus of anxieties in the film?

LE: The funny thing is girls are growing up thinking that their value lies in the way they look and not what they do in life. One of the lives in the movie is, it feels like they've taken our sexuality away from us and they're selling it back to us in increments through advertisements. So there is that in the film, the idea of women feeling uncomfortable about their bodies. You know, they sexualize the female body, but the moment a woman makes a statement with it, we're seemingly committing a crime. If I had made a movie called "Equality" where no one was topless, no one would be talking about this movie - the nipple has become the trojan horse for getting people to view a film about the oppression of women. Women should be able to do whatever they want with their bodies. In the early 1900s, men were getting arrested because they didn't want to wear their one-piece suits - it wasn't until 1936 that Coney Island fought that law, and men now have the right to go topless. We want that right. It's not like we want every woman to go topless, but we do want equality.

'Free The Nipple' is currently in theatrical release and available on VOD.