With this critically-acclaimed Brooklyn pop/punk/rock band gearing up for their next album, we asked lead singer Louisa Solomon about her TV and movie obsessions - and how she keeps up her media habits. 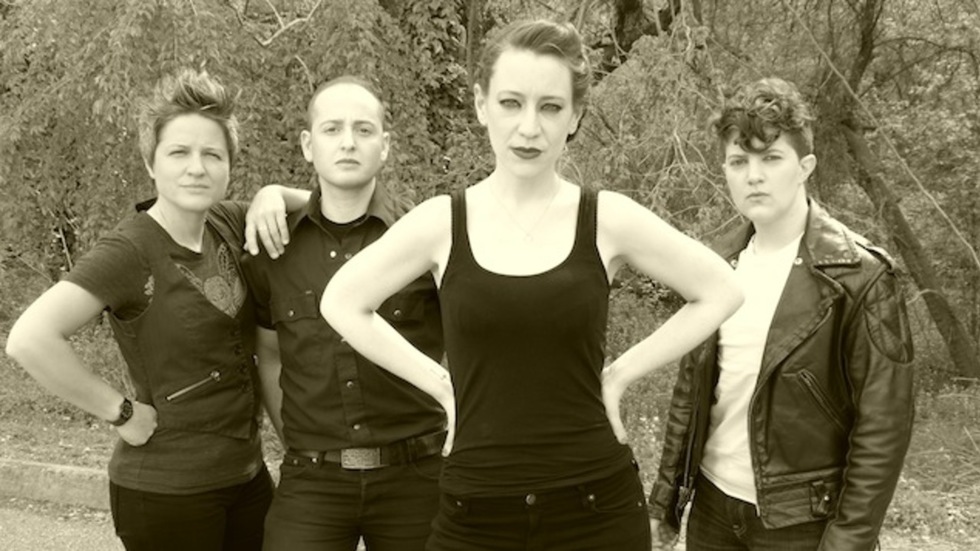 (Welcome to Screen Habits: a new column by Mark Blankenship, wherein he chooses the most interesting people around and gets them to tell him what they're watching, why they're watching it, and what screens they watch it on.)

Most of the time, I'm so busy dancing to the The Shondes that I don't notice their queer, radical, Jewish politics. But that's why I like their music: If you want to jump around your living room, they've got a kicky anthem, stuffing punk and pop and Klezmer into the same song. But if you like a little thinking with your choruses, they've also got you covered. When they're not making references to villains from The Smurfs, they're critiquing gender paradigms, challenge notions about modern Judaism, and getting queer about love and heartbreak. This makes The Shondes---their name is a play on the Yiddish word for "disgrace"---seem like a band that really gives a damn. Since their new album The Garden arrives in September, I asked lead singer Louisa Solomon how the media impacts her life and art. I was not expecting the references to Princess Leia, but I was down with it. First, I'd like to know this: Along with your own new songs, are there any songs that have been inspiring you recently? Songs that have felt especially powerful or exciting in the last few weeks?

Being in the studio, I've been under a rock for a while with regard to new music. I have definitely been moved by the new National record, the new Bruno Mars record, and I am consistently inspired by my personal list of classics: Otis Redding, Bruce Springsteen, Nina Simone, X-Ray Spex.

People like Shonda and Joss Whedon have smuggled feminism and meaningful representations of people of color and women and LGBT people onto network television.

Do you watch TV?

I love television. As the spring TV season wound down, I was most focused on serial network drama: Nashville, Scandal, Grey's Anatomy. I grew up with Beverly Hills, 90210, and as a result, I think that prime time soap format is deeply embedded in me. I later fell in love with Buffy the Vampire Slayer and Angel. Once on tour, I made us drive to "Casa Walsh" and "Beverly/Sunnydale High." (Yes, they used the same set on both my seminal dramas!) I felt like I was coming home.

The Buffy school is also the 90210 school? Mind blowing. How about new shows?

honda Rhimes is one of my role models right now, and I have absolutely no shame in talking about how much I enjoy her shows. I'm sick of this whole notion of "guilty pleasure." If it's pleasurable, and it's not hurting anyone, why the guilt? (And this is coming from a Jew!) In my view, accessible, mainstream cultural forms are arguably among the most important to pay attention to. People like Shonda and Joss Whedon have smuggled feminism and meaningful representations of people of color and women and LGBT people onto network television. I enjoy Boardwalk Empire and Mad Men as much as the next guy, but I'd take Grey's Anatomy first any day. The conscious use of over-the-top melodrama is effing brilliant. I laugh, I cry, I am entertained, I think, and I feel. I connect with, identify with, and feel for the characters as I build relationships with them over years and years.

As someone who has spent most of his adult life watching Law & Order, I share your "no guilt" attitude. What about movies?

I love film. In fact, because I'm so awful at visual media myself, I think it's easier for me to find myself completely overwhelmed by it. When I listen to music, I have a much more informed critical perspective, whereas with film, I can maintain a culturally critical perspective, but not much of an aesthetic one. I feel clueless! So I just get taken in, consumed by the sights and sounds. It lets me experience a bit of "little kid awe."

Has a film ever impacted your music?

We did quote Empire Strikes Back in our song "Are You Ready," with the line "my hands are dirty too."(Note: This is where that line appears in the movie.)

So you're a Star Wars fan?

As a kid, the films with the biggest impact on me were those in the original Star Wars trilogy. Han and Leia's relationship taught me 95% of what I know about love. [The scene we reference in "Are You Ready"] is such a root for me! There's the surface text---this super-hot push-pull dynamic between the rogue and the princess---and there's Princess Leia's ongoing fight with her superego because Han doesn't care about the movement. But in her heart, she knows he's a good man (and a super hot scoundrel!), and soon enough he'll be on board with the rebellion. Seriously, I flipped to this scene on TV the other day and I was instantly swooning.

So speaking of flipping on a TV... how do you experience media? Do you use portable devices? Is there a Victrola in your living room?

I love old-fashioned radios for listening to baseball. I love my DVR for banking up my serial dramas. I use an iPad at night to catch up on shows I missed all together. I just finished Friday Night Lights, and now I'm working through Mad Men. I listen to music on an iPod when I'm traveling and my record player when I'm at home. The sound and feel of vinyl will always hold more appeal for me than any digital device, but of course, the convenience of digital is undeniable. That's why we always package MP3 downloads with our LPs.

(Get into The Shondes here.)