Jam Out With The Official TFF 2013 Spotify Playlist

Stream our playlist of songs inspired by this year's festival line-up, which emphasizes music and film. 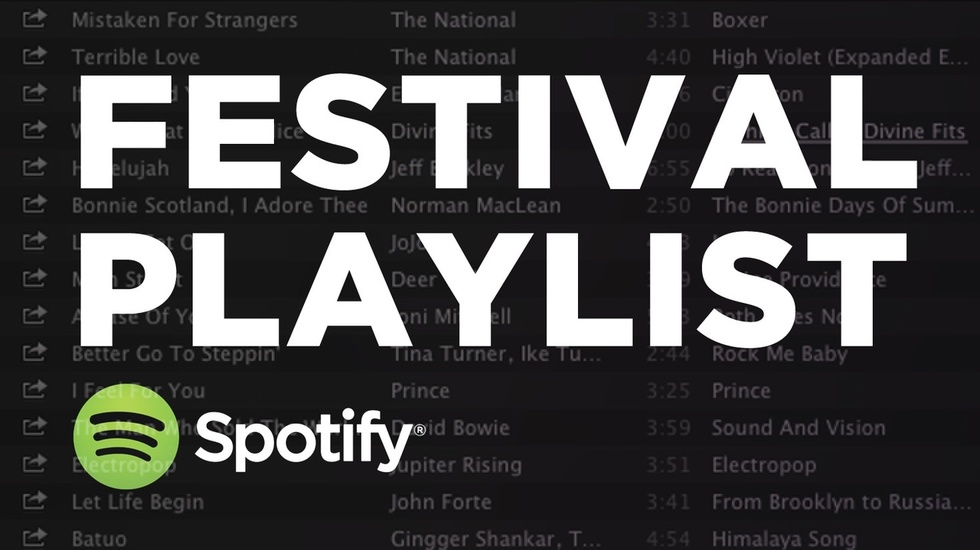 Music has always been important to the movies, from the pianos that accompanied the earliest films, to John Cusack blasting Peter Gabriel from his boombox, to Skyfall. This year, TFF is celebrating "Music + Film" with a slew of movies that highlight musicians and music. As we've already announced, the festival will kick off with the film Mistaken for Strangers, featuring indie giants The National, who will also be performing that night. The Festival will be bookended by a performance by New York-bred afro-rockers, Vampire Weekend, which will be streamed live as part of the American Express®  Unstaged music series.

To celebrate these performances and more, we've hooked up with Spotify to create a playlist of songs that are associated with this year's crop of films. You can stream the playlist above (curated by Matt Spangler, Tribeca's EVP of Content and Marketing), and look below for a rundown of each of the songs in our playlist and why we picked them:

Mistaken For Strangers - The National: The title track of this year's festival opener, "Mistaken for Strangers" was the band's breakout hit from their 2007 album, The Boxer. The swelling, dark, Joy Division-esque anthem also came with a "cinema verite"-style video by Thread-Count, a collective featuring Mistaken for Strangers' own director, Tom Berninger.

If I Needed You - Emmylou Harris: Broken Circle Breakdown follows the relationship between tattooed bombshell Elise and earnest bluegrass musician Didier. The film is chockfull of bluegrass classics, including this heartwrending ballad by Emmylou Harris.

Would That Not Be Nice - Divine Fits: A modern day supergroup, Divine Fits features members of Spoon, Wolf Parade and the Handsome Furs. Obviously a multitasker, band member Dan Boeckner also had time to contribute the original score to Adult World, Scott Coffey's comedy about pornography and poetry which will premiere at this year's festival.

Hallelujah - Jeff Buckley: A standard of many artists, including John Cale and Rufus Wainwright, the most famous recording of Leonard Cohen's "Hallelujah" is arguably that of Jeff Buckley, the subject of Daniel Algrant's film Greetings From Tim Buckley. The movie documents the musician's performance at a tribute concert for his father, a performance that awakens him to the musical path he is destined to follow.

Bonnie Scotland, I Adore Thee - Norman Mclean - Documentary When The Song Dies is an exploration of the classic songs, stories, and myths of the Machars peninsula. The film features an array of classic Scotch ballads including this one from Norman Maclean.

Leave - Jojo - Pint-sized R&B songstress Jojo released this song in 2004 and it instantly became the soundtrack to hundreds of highschool breakups. In G.B.F., the song fuels the fight between two rival popular girls as they fight over who will be the first to snap up the school's first "gay best friend."

Main Street - Deer Tick: Providence band Deer Tick have several incarnations, most notably (and awesomely) their infrequent stints as Deervana, a Nirvana cover band. The band took on another role as composers, creating the original score for this year's searing look at American drug addiction, Oxyana.

A Case of You - Joni Mitchell: One of the folk warbler's most popular songs, A Case of You is also the title of one of Tribeca's world premieres, written by Justin Long and directed by TFF alumni, Kat Coiro. Check out the film's namesake in our playlist, and be sure to check out our recent interview with the film's director.

Let's Dance - Tina Turner/David Bowie - This song from her 1988 European tour is one of Tina's classics also features David Bowie who was featured prominently in the Festival film Who Shot Rock n' Roll.

No More Mr. Nice Guy - Alice Cooper - The Godfather of Shock Rock, this tune defines the over-the-top spectacle of Alice with stage shows inspired by horror films, vaudeville and heavy metal. The song is featured prominently in Festival film Who Shot Rock n' Roll but for movie buffs this song may forever be remembered as Ben Affleck delivering paddles to unsuspecting freshman in Dazed & Confused.

Brass in Pocket - The Pretenders - Also from the soundtrack of Who Shot Rock n' Roll, this single from 1979 is a departure by the Pretenders from most of their early sound but become the song that was their biggest hit and defined them more than any other.

Electropop - Jupiter Rising: Pop duo Jupiter Rising rose to the top of the dance charts with this 2006 single. The male half of Jupiter Rising, Spence Nezey contributed the score for in-depth documentary on the national drug industry (and TFF entry), How to Make Money Selling Drugs.

Let Life Begin - John Forte: Last year's festival favorite Russian Winter followed musician John Forte on a tour of creative and cultural exploration of Siberia. Along that journay Forte collaborated on new songs with local artists, and produced tracks like this one. You can catch Forte's work again this year, as he also contributed the soundtrack for The Project, which follows a band of Somali pirate-hunters. And make sure to watch Forte in our "Prequel" series, where he discusses the creation of Russian Winter and reunites with artists from that tour for a one-year reunion concert.

Batuo - Gingger Shankar: Indian American composer and multi-instrumentalist Gingger Shankar is no stranger to the world of film scoring, some of her credits include The Passion of The Christ and festival-darling Circumstance. Shankar returned to the recording booth for this year's Powerless, which tells the story of a modern Robin Hood in Kanpur, India, who works to get electricity to those who can't afford it.

Wayfaring Stranger - Jack White: A literal "Jack of all trades," Jack White recorded this song for the soundtrack to Cold Mountain, which he was also acting in. The tune is reinvented in Broken Circle Breakdown, where it is used to score one of the film's most pivotal scenes.

Welcome Back - Young Jeezy: Ringmasters, one of the most well known "flexing" dance crews, is featured in dancing documentary Flex is Kings - which explores this new form of hip hop dancing. The crew danced to a remix of this for their performance on America's Next Top Dance Crew.

A-Punk - Vampire Weekend: The first hit for these Columbia-educated rock n' rollers, "A-Punk" catapulted Ezra Koenig and company to stardom. The band's performance on the last night of TFF will be streamed live as part of the American Express®  Unstaged music series.

Oxford Comma - Vampire Weekend: This follow-up hit for Vampire Weekend may end up being one of the songs they play on the aforementioned closing set, which will be filmed by Boardwalk Empire's Steve Buscemi from NYC's Roseland Ballroom and streamed live as part of the American Express®  Unstaged music series.