'Room 237' and the Movie Microviewing Revolution

Film obsessives are using old movies, new media and flexible laws to reshape the way we see classics -- and maybe even turn a profit. 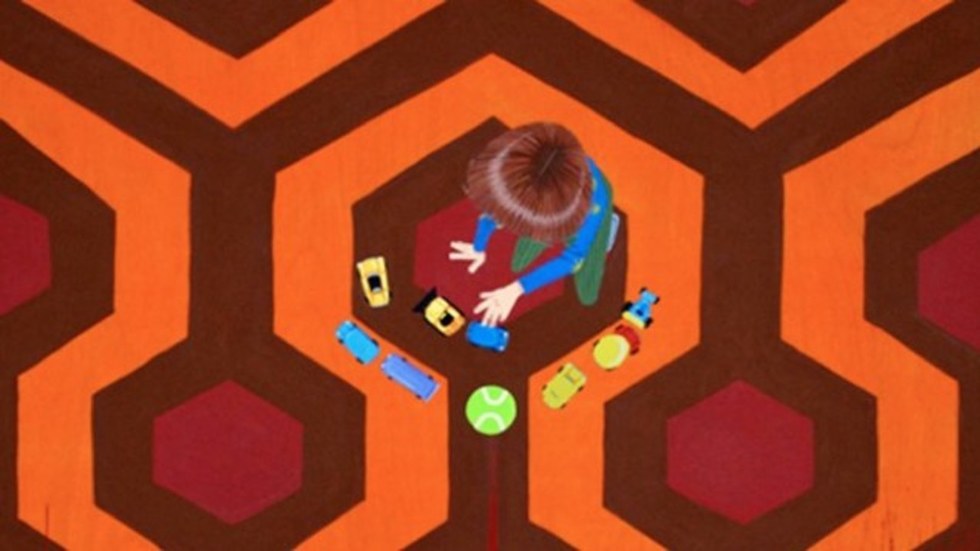 Stanley Kubrick brings something out in people -- other filmmakers in particular, whether it's his contemporary and pal Steven Spielberg picking up the slack on unfinished Kubrick projects like A.I. and Napoleon or acolytes like Christopher Nolan plugging stylistic and visual cues from Kubrickalia into their own movies. But Kubrick really brings something out in director Rodney Ascher and the subjects of his new documentary Room 237, which chronicles the theories, meanings and misgivings derived from having watched Kubrick's 1980 horror epic The Shining at a kind of subatomic level. Genocide allegory? Holocaust exploration? Fake moon-landing confessional? Liberally borrowing film clips and overlaying narration, no read is too close, no deduction too arcane for Ascher and Co.

Room 237 barely scratches the surface of a phenomenon that has blossomed in the YouTube era. Let's call it microviewing -- the painstaking deconstruction of classic cinema for fun and/or profit. (IFC Films opened Room 237 over the weekend in limited release.) Ascher's film actually barely even scratches the surface of Shining microviewing; Room 237 doesn't include the multitude of readings by film critic/video essayist Rob Ager, including the mindbending "Kubrick's Gold Story" theory that Ager laid out last year over four parts and 45 minutes.

"When I started making video essays on movies in 2007 I didn’t even look to see if anyone else was doing the same," Ager tells me via e-mail. "I just did it as a curious experiment to find out what the reactions would be and was surprised to find whole heaps of people take as much interest in movies as I do. It was only later that people started emailing me to mention other video essays on movies. There’s quite a variety of them out there."

There is something revolutionary about the ways microviewing has come to repurpose and repackage classic movies with its makers' own signature zeal.

Combining 21st-century advances in consumer editing software and online distribution with decidedly 20th-century fair-use laws, microviewing isn't entirely new. Obviously, critics have read between the frames of films and deep into the ideas of filmmakers for generations, and films about filmmaking -- both dramatic and documentary -- have proliferated since the early days of cinema. It's been nearly 15 years since Jean-Luc Godard finally fleshed out his seminal four-and-a-half-hour Histoire(s) du cinema, more than a decade in the making.

Yet there is something revolutionary about the ways microviewing has come to repurpose and repackage classic movies with its makers' own signature zeal. In the 2003 documentary essay Los Angeles Plays Itself, Thom Andersen reckoned with the spectrum of attitudes and approaches toward Los Angeles in the movies over the years, from the silent era to noir to Die Hard and Who Framed Roger Rabbit? and beyond. Ten years later in Room 237, Ascher uses footage from not only Kubrick films but also those by Lamberto Bava (Demons and Demons 2), John Landis (An American Werewolf in London) and various others to craft certain sensations derived from his interviewees' experiences of watching and processing The Shining.

Beyond the feature realm, we have the modulated essays populating indieWIRE's Press Play blog, co-founded by the dependably great critic Matt Zoller Seitz. In February, Press Play editor-in-chief Kevin B. Lee, cited as the "grandmaster of the form" by no less an eminence than Roger Ebert, compiled a greatest-hits reel of online microviews for Ebert's site. (More comprehensively, Catherine Grant collects much of the latest, greatest microviewing at her Audiovisualcy pages on both Vimeo and Facebook.) Later this month at Ebert's annual film festival in Champaign-Urbana, Ill., Lee and other video essayists will participate in a panel about the video-essay movement.

"I've tried a lot of different techniques and formats to keep things interesting (as much for myself as for the viewer)," says Lee, who estimates having made 150 essays since 2007. "But regardless of who I made them for or what approach I took, essentially that purpose of do-it-yourself discovery has remained the most vital, both for what it stands for (self-enabled learning and creative reclaiming of popular culture) and the work that comes out of it."

Lee stresses the distinction between video essays and supercuts, the latter of which have experienced their own surge in recent years as ways to digest, say, all the ways Nicolas Cage goes bonkers onscreen. The supercut, while authoritative, is a mere diet compared to microviewing's full-body workout. "The way [the supercut] works instantly grabs our attention and is cool to watch, even though we've seen it applied dozens of times already," Lee explains via e-mail. "But it will probably only be a matter of time before we exhaust approaches like that, once they start offering little that's new or illuminating."

Which isn't to say the gonzo spirit of the supercut can't apply to video essays. Few microviewers match or even bother to emulate the wizardry of Red Letter Media proprietor Mike Stoklasa (a.k.a. "Mr. Plinkett"), whose viral, feature-length riffs on all three Star Wars prequels, Indiana Jones and the Kingdom of the Crystal Skull, and Titanic -- especially, especially Titanic­ -- use film history and genre dynamics to dismantle modern blockbusters [clip language NSFW]:

Stoklasa's original Star Wars Episode I essay has accrued millions of views since its debut in 2009, when at least one mainstream writer-producer went public with its genius and a microviewing star was born. Its staying power owes more to Mr. Plinkett's guttural ingenuity, however. (Or his general dependence, as Ager notes to me, on criticizing movies that aren't very good.) There's also the boost that comes with piggybacking on a mainstream -- and copyrighted -- Hollywood property.

This fair-use exemption remains essential to both the creative and business models that make microviewing increasingly viable, keeping critical reads like Room 237 and industry investigations like Kirby Dick's clip-intensive MPAA ratings-board expose This Film Is Not Yet Rated safe for distribution. Ager's video essays begin with legal advisories that work as a sort of inverse to the iconic FBI warnings that precede home-video releases, reminding piracy-wary services like YouTube that this particular brand of criticism is protected by law. Several different uploads of Los Angeles Plays Itself -- which famously remains unavailable (for now) on home video -- have thrived online without even those advisories.

Of course, neither the filmmaker Andersen nor a conventional distributor makes money from those uploads. Room 237 earned $36,000 on two screens for IFC Films over the last three days. Ager has built an audience for his DVD sales by the word of mouth generated on YouTube; Lee earns part of his living from video-essay commissions for distributors like The Criterion Collection. Their strong showings signify milestones in the market for microviewing, while further complicating the relationship between filmmakers, fans and the conglomerates that connect them.

"So much of it comes down to challenging the hierarchy of big media culture, its presumed power over the average human being (or what they refer to as the consumer), and establishing a new kind of cultural fairness," Lee says. "And now you see Warner Bros. working happily with Rodney Ascher, because they see how much the film amounts to a feature length commercial on behalf of The Shining."

The biggest Room 237 critic to date, in fact, may be Kubrick's longtime assistant Leon Vitali, who recently dismissed some of the film's theories and speculation about The Shining as "total balderdash." Nevertheless, Ager isn't done with The Shining. He still plans to issue his own DVD about the film, which has been delayed by a lack of copyright permissions not from Warner Bros., but rather for photocopies from the Kubrick Archives in London.

"Personally I think [studios] see my work as an asset because I only review films that I like," he says. "So they’re getting free advertising and strong positive endorsement of their products in return for my fair-use inclusion of their copyrighted work." Ager points to Miramax embedding his analysis of deleted scenes in Reservoir Dogs on its website to promote the home-video re-release of the film – "a mutual endorsement." He suggests that the irreverent work of critics like Stoklasa may present the ultimate test cases, but that even negative, long-winded or humorous attacks are likely protected.

"I don't see any legal or moral option to stop them," Ager says. "It would be a sad day for free speech if opinions of movies were to be censored."