The Next Frontier for Virtual Reality Storytelling? Subversive Comedy and Fart Jokes

Thanks to comedians Paul Scheer, Rob Huebel, and Reggie Watts, the once-intimidating world of VR is now as simple and accessible as a good old-fashioned flatulence gag. 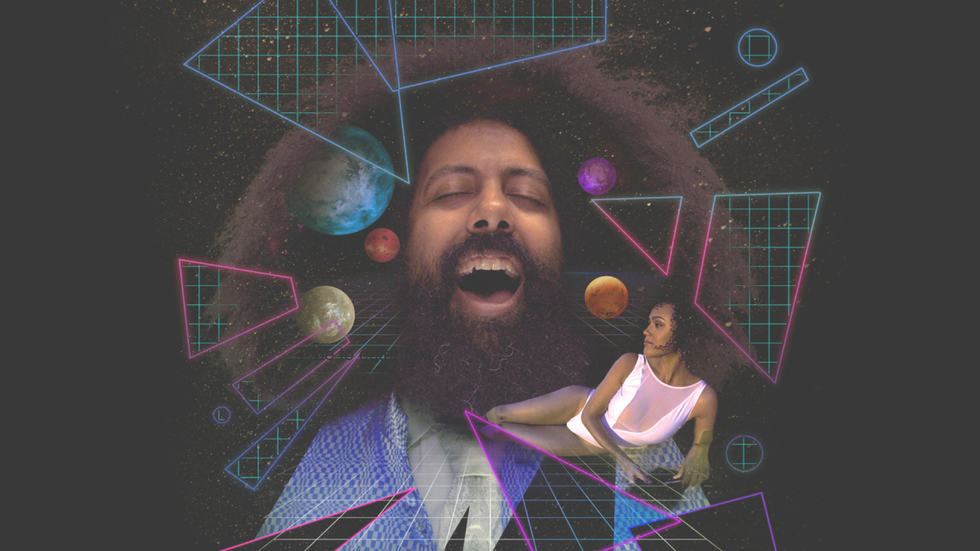 Reggie Watts and Nathalie Emmanuel in WAVES (2016). Photo by WEVR.

As the virtual reality technology grows, so do its storytelling possibilities. But can VR be funny? At the Tribeca Film Festival in April, attendees will be able to explore underwater coral reefs near Italy, go on adventures above the clouds, drive through South Central, LA, and even slay monsters in grungy hotel rooms—none of which, though, is inherently funny. But there's a shift happening. At this year's Sundance, two new VR projects showed the tech's strong potential for laughs.

The first comedy VR highlight was Interrogation, starring comedians Rob Huebel and Paul Scheer. Presented by Funny or Die, it's dubbed as the "first-ever virtual reality short shot in full 360° 3D." (Which to some, I suspect, sounds like a never-ending headache.) The sketch's concept is simple enough: Heubel and Sheer play two unconventional (read: inept) police officers who are grilling the viewer (you) about flatulence you may or may not have dealt. There’s something unexpectedly ingenious in the film's low stakes. By reducing VR to a fart joke (a pretty good one at that), it allows one to wander aimlessly throughout the space created by director Lex Halaby. As you swivel around in your chair, bits of physical comedy are peppered throughout, popping up in the screen's corners. Enraptured by the nascent medium, Halaby crafts each frame in meticulous detail. In doing so, the interrogation room comes alive.

It’s the multitude of possibilities, of unabashed discovery, that has attracted many to VR. "There are 800 million TV channels, but as far as VR, it feels like the Wild West right now," says Huebel. "Everyone's at the starting line and someone fired the pistol and now people are just scrambling to make the first cool stuff that will brand them as the pioneers in this space."

Artists like Scheer are enlivened by VR because of how it differs from other creative work. "The thing that I liked about [working on Interrogation], which is very different from what I’m used to doing, is that it is one take, and you have to keep a looseness to your performance." As a long-standing member of the Upright Citizens Brigade, Scheer is no foreigner to improv. He’s built a career by thinking on his feet, especially on Comedy Central’s Crash Test, which he co-hosts with Huebel. But to him, Interrogation "was the most pure form of that." Huebel, for his part, doesn’t seem to perceive VR as some sort of artistic apex. "It was strangely appropriate that the very first high-tech virtual reality comedy bit would be a fart joke. It would be like traveling to the moon to pull someone’s pants down on TV."

In talking about why people are responding so effusively to the sketch (aside from their interest in passing gas), Huebel cites its ability to be completely immersive, saying, "They are a character in the narrative—that’s the mind-blowing part of it." Reggie Watts, the surrealism-loving funnyman known for IFC's Comedy Bang! Bang!, was also at Sundance's New Frontier with his own VR project: Waves, in which he and gifted director Benjamin Dickinson bizarrely and hilariously lampoon religious extremism and cults. Watts believes VR’s strength remains in "synchronization, when several people are on headsets, but they're collectively synchronized."

Intellectually, Watts is onto something. VR allows a group of strangers in a room to put on Samsung's high-tech goggles and experience an experiment together. "Experiment" is the key distinction here, though. The conceit of waxing funny in VR is very much in its infancy. And in wading into this world, there didn't seem to be a sense, at least afterward, of a shared experience. What everyone did seem to enjoy, however, is watching people do VR. "You get to see people experience this really private form of entertainment, and they don’t even realize what they look like," says Huebel. "They look like total assholes, but they don’t really care, because you’re literally in a different world."

In envisioning a future where one could submerge him- or herself in VR (that "different world"), there’s some cause for concern. "Imagine the nightmare that’s just around the corner when VR pornography takes over and people are just walking around on the streets with giant boners everywhere," says Huebel. Soon he predicts the real world will be less intriguing than VR. "There's gonna be this whole other dimension that you can disappear inside of. I think VR is going to facilitate just having this complete double life."

The unpredictability of the future allows no one to be prophetic. When I ask Scheer how VR will roughly pan out in the next five years, he responds with laughter. "I think the question is, how will VR play out in five months?" He explains that VR has radically changed since he started getting involved a mere eight months ago. "We've talked a lot about doing Crash Test as a VR special, because it would really work for that world."

Scheer, Huebel, and Watts were all certain that it’s only a matter of time before VR works its way into the mainstream consciousness. The ubiquity of VR, in turn, could potentially create VR comedians, not unlike the Bo Burnhams of the world who've wrung careers out of YouTube. "There will probably be that wave of first, early adopters who get in and make a name for themselves," says Huebel. Scheer sees someone devoting "all of their time and energy" to the format, like "YouTube people who've figured out what the voice is that works, and Vine people like KingBatch who've figured out their thing."

Scheer also expressed reservations about the format's expansion. "It’s a little more intense than creating a video on YouTube,” he said. "One of the reasons those people who figured it out were able to do make videos was because the technology was basically just turning on your computer." The vastness of VR forces its creators to be innovative world-builders who must care about blocking as much as storytelling. Simply having a personality won’t suffice.

Another roadblock in the proliferation of VR comedy is, naturally, money. In contrast to other VR ventures at Sundance, Huebel claims Interrogation was made on the cheap. "What we did for Funny or Die was on the very low end of the spectrum," he says. "They weren't proper VR cameras. We used this rig that was designed by our director, and it was done on a very shoestring budget." On the higher end of that spectrum is something like Gone (a thriller from the creators of AMC’s The Walking Dead), which Huebel estimates cost "a half a million dollars" to make. He continues to describe the variations of VR to expect down the line: "You’re gonna have a TV production quality look that feels like The Walking Dead, and you're going to have more basic stuff, where people are going out and it’s essentially like a GoPro VR unit." Unlike other forms of artistic expression, it seems the audaciousness of a VR project will be primarily predicated on budget. The point being, those who can afford to escape reality with grandeur, will.

By the tail-end of our conversation, Huebel, who is undeniably proud of the work done on Interrogation, admits that they "barely scratched the bottom of the barrel." A sound of defeat didn’t fall over our call, though. What was perceptible was Huebel’s unending curiosity, a desire to explore the unknown. Which is where virtual reality currently resides. For the time being, as VR rapidly transmutes, we are all neophytes, alternately feverish and fearful of what this newfangled medium could be, will be, or even should be.