"I wanted to marry Vine immediately and run off into the sunset." This week in our series of interviews with professional Vine creators, we talk to Viner and musical comedian Nicholas Megalis about improvised Vines, committing to an idea, and, most importantly, how to #singwhatyousee. 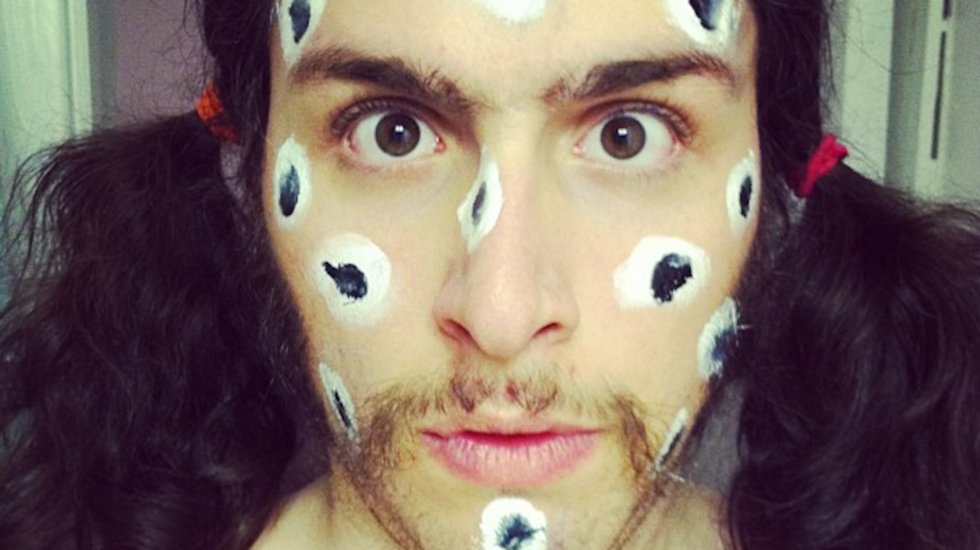 Nicholas Megalis is a musician, artist and, most recently, Viner based in NYC. With followers on Seenive, Twitter and Facebook, he has 2.4 million people viewing his comedic Vines. In this interview, we asked him about his road to becoming one of the most recognizable and beloved Viners out there:

Tribeca: You've been a musician for many years now and have come up with some very poignant lyrics ("Maybe you'll realize life is short and love is shorter", from "Pillow Talk Forever" is one of my favorites.) And you've also racked up over 2 million Vine followers from being unabashedly goofy and coming up with hilarious raps. How did you transition into being one of the most beloved comics on Vine?

Nicholas Megalis: I laugh all day long, usually I'm not even sure what I'm laughing about. I wanted to make people laugh and make them think. Vine came along and I fell in love. Deeply in love. I wanted to marry Vine immediately and run off into the sunset. I don't know how I transitioned. I just like experimenting with video and sound and Vine was an instant obsession. It felt right. Even as I am answering this question, I am watching Vines. Just kidding. Or am I?

Tribeca: How much planning goes into a Vine? Or do you try to film a song the moment you have an idea? (basically, what's your process like?)

NM: I sometimes will be in a restaurant and will see a guy wearing an amazing scarf and I will stop eating immediately. I will put my fork down and just start filming and singing about him. I won't even chew my food because I am so compelled to sing. It sometimes is that instant. Other times I will be sitting in my apartment for four hours trying to attach forks to a "fork helmet".

I thought that I was probably borderline psychotic for walking around and singing stuff about people and small dogs.

Vine is such a weird experiment. I literally have no idea what will happen tomorrow. I just hope I don't get abducted by aliens or hit by a skateboarder.

Tribeca: For the Vines you film in real life (like when you sing to cashiers or try to strike up conversations about flowers with strangers), do you have to explain what Vine is after the fact or do you just let the interaction run its course?

There is no other you. So do what you do.​

NM: I stood with an elderly woman for a half hour one time trying to explain Vine and finally she said, "You want to put this video on your computer?" She didn't understand that it was an app. So I said "Yes! Exactly. I want to put this video on my computer, so other people can see it on their computers and enjoy it!" And she smiled and grabbed my shoulder and said, "That's amazing!" She laughed and walked away. It was so epic.

Tribeca: You started the #singwhatyousee trend on Vine. How did this come about, and did you expect the amount of responses you got?

NM: For a long time, I thought that I was probably borderline psychotic for walking around and singing stuff about people and small dogs. But when Viners started to do #singwhatyousee Vines, I freaked out! I am so happy to know that there are freaks out there who are compelled to sing about old people and baby carrots.

Tribeca: What Viners/artists inspire you the most? Which collaborations with other Vine artists were your favorites?

NM: I am inspired by anybody who does something unique and special and magical. There is no other you. So do what you do. Do what you do all day long and don't stop. Don't sleep!

NM: I would have a randomizer button. You click the button and it introduces you to somebody you've never heard of. It's just a shuffle for the weirdness of the Vine world.

Tribeca: Have you or do you plan to film anything on Instagram Video, now that it's an option?

NM: I do Instagram videos daily now. It's a totally different platform. It's longer, the videos don't loop. It's a different world. I found a single dirty sock in a rain puddle the other day, which isn't abnormal for NYC, and I filmed it for Instagram. I wanted to try it on, it looked about my size, but I didn't want my foot to fall off from the six hundred and seventy diseases the sock carried. Maybe I'll go back and try it on if it's still there, I'm thinking about it.

NM: Make sure you call off work for the next four months because you're going to be full-blown addicted to Vine within seconds.

Julia Pugachevsky is Tribeca's Vine Correspondent (among other things). Check out her round up of the Week's Best Vines every Friday morning on TribecaFilm.com, and come back next Wednesday for another interview with an expert Vine user (and see last week's, with Brittany Furlan).