Looking for an indie-film inspiration for your Halloween costume? We're here for you. Today, we've got four suggestions for movie-character costumes inspired by that most chameleonic of screen actresses, Tilda Swinton. 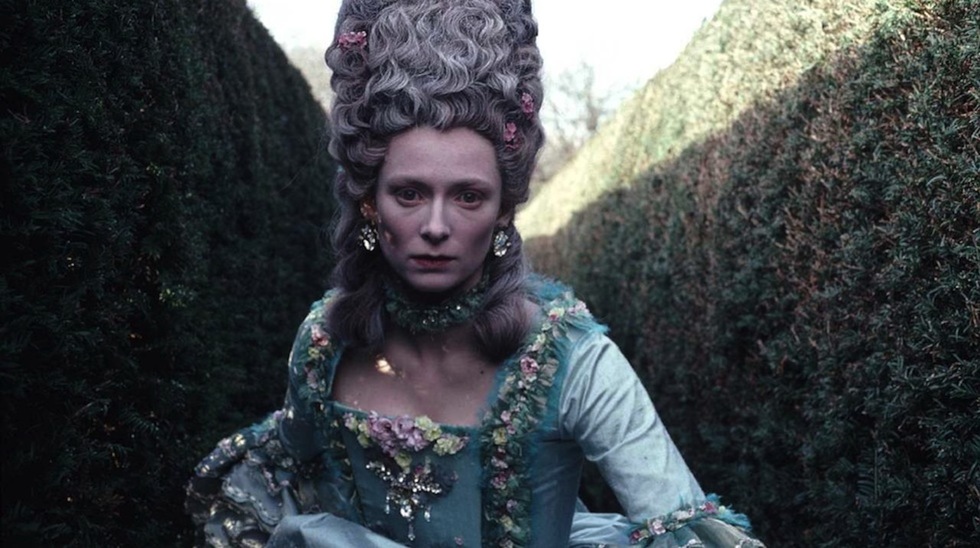 The Inspiration: Orlando in Orlando
Essential Elements: Big, voluminous 18th-century inspired gown, adorned with enough rosettes and jewels and frills to make everyone who's ever appeared on Project Runway commit spontaneous suicide. Tall, grayed, powdered wig that will surely get knocked off at every entranceway, but it'll be worth it.
Key Accessories: Pale skin. Pale, pale, pale skin.
The Attitude: Poetic. Androgynous. Able to adapt to any given situation. Wise beyond what appear to be your years.

The Inspiration: Social Services in Moonrise Kingdom
Essential Elements: Royal blue cape, with matching royal blue cap.
Key Accessories: Inflexible orders from the bureaucracy.
The Attitude: Efficient. Unbending. Concerned for the welfare of wayward children and also the proper procedures with which those children are handled.

The Inspiration: Julia in Julia
Essential Elements: Two options for this costume. Either a flowery, too-revealing blouse atop a a similarly cavalier bra, or else a maroon leather jacket and a dark, feature-less mask.
Key Accessories: Either wild tresses or red hair or else something more slicked back. Either a mixed drink or a gun. Either a gentleman caller who doesn't care or an incredibly frightened child.
The Attitude: Either out of control or out of control.

The Inspiration: Gabriel in Constantine
Essential Elements: Slim-fit suit. Short-ish haircut. Androgyny is the watchword.
Key Accessories: Wings, but kept under wraps until the most dramatic moment.
The Attitude: Beatific weariness. Manipulative of mere mortals. Ready for celestial battle.