David Lynch sounds sad about film. Here's why he should perk up and make a Kickstarter. 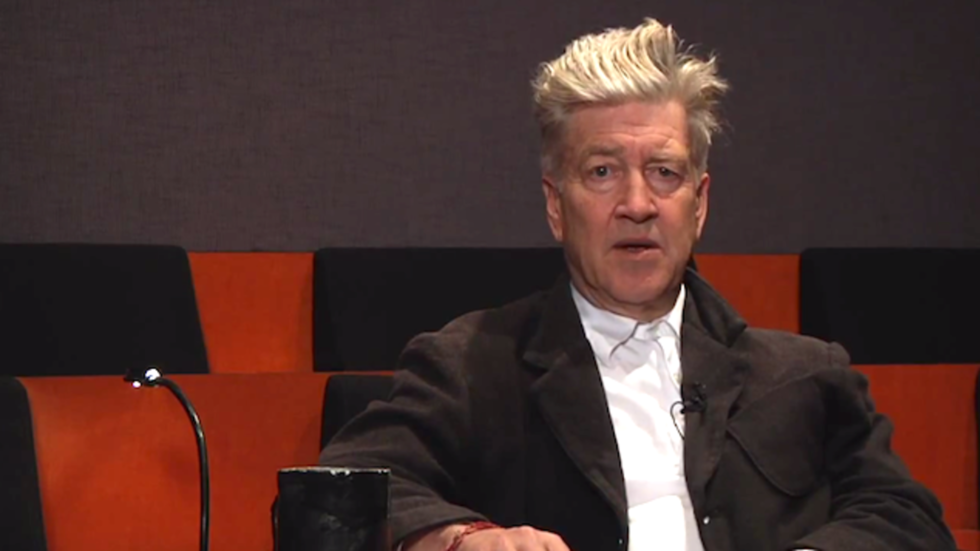 David Lynch is uncertain about his future as a filmmaker. "It's a very depressing picture," he told The Independent . "With alternative cinema – any sort of cinema that isn't mainstream – you're fresh out of luck in terms of getting theatre space and having people come to see it. Even if I had a big idea, the world is different now. Unfortunately, my ideas are not what you'd call commercial, and money really drives the boat these days. So I don't know what my future is. I don't have a clue what I'm going to be able to do in the world of cinema."

On Kickstarter, for instance, a Lynch documentary was so popular that it overperformed, getting more than 500% of its needed funding.

Lately David Lynch seems to be preoccupied with everything -- music, signature coffee blends, music, spoof iPod ads -- except filmmaking. Lynch's last feature, Inland Empire, was released back in 2006. The film won the National Society of Film Critics award in the Best Experimental Film category (2007) and the Future Film Festival Digital award (2006) at Venice. The box office for the film, however, was a bit disappointing, and that may be influencing Lynch's pessimism.

Lynch also has ongoing questions about the future of film (don’t we all?). In 2011, Lynch told Details: "I don't know what's happening to cinema. It hasn't settled into what it's going to be next." What, to be specific, could be the future of David Lynch films? One answer that appears fairly obvious is crowdfunding. It's hard to imagine a filmmaker whose experimental style more amenable to crowdfunding platforms – both Kickstarter and its indie cousin, Indiegogo. (In fact, maybe there isn't one!)

On Kickstarter, for instance, a Lynch documentary was so popular that it overperformed, gathering more than 500% of its funding. Further, David Lynch’s youngest son Riley launched a successful Kickstarter campaign, also for a film project, this year.

Film, arguably, is where television was a decade ago.

Another possible future for David Lynch films is the documentary format. “Meditation, Creativity, Peace” is a documentary that followed the filmmaker, with his cooperation, on a 16 country tour as he spoke about transcendental meditation, one of his favorite subjects.

What would a passionate Lynch documentary – him behind and not in front of the camera -- on that subject look like? Would he be interested in that project? His fans almost certainly would. Perhaps that, too, could be crowdfunded?

About a decade ago, Lynch launched the eccentric web serial Rabbits on DavidLynch.com. It was, essentially, a series of wildly experimental shorts made for the web that probably wouldn’t have found a platform anywhere else. I asked the experimental filmmaker years ago in MacDirectory about the project. “It is like being (a TV executive),” he replied. “Except if it was like television it would kill (Rabbits). (TV) doesn’t account for certain (events) coming along that would make things better. It's like a steam roller. Eventually, it wears people down and the ideas stop flowing.” Lynch told me that in 2002. A lot, of course, has happened since then in the television industry, to basic cable in particular.

The same could be said about the film industry. Film, arguably, is where television was a decade ago. The future of film is opaque for creators, investors and audiences alike. Everything is in flux. Business models and methods of financing are in mid-transformation. These are opportune times for any aspiring, shrewd filmmaker. For an established filmmaker like David Lynch, however, the industry is probably more exciting than it has been in years.

Related: Here's a great outtake from the documentary Side by Side about the film vs digital debate: David Lynch talks about the consistency allowed by digital.)