With independent voices like Richard Linklater and Morgan Spurlock leading the way, is the original web series entering a transformative period? 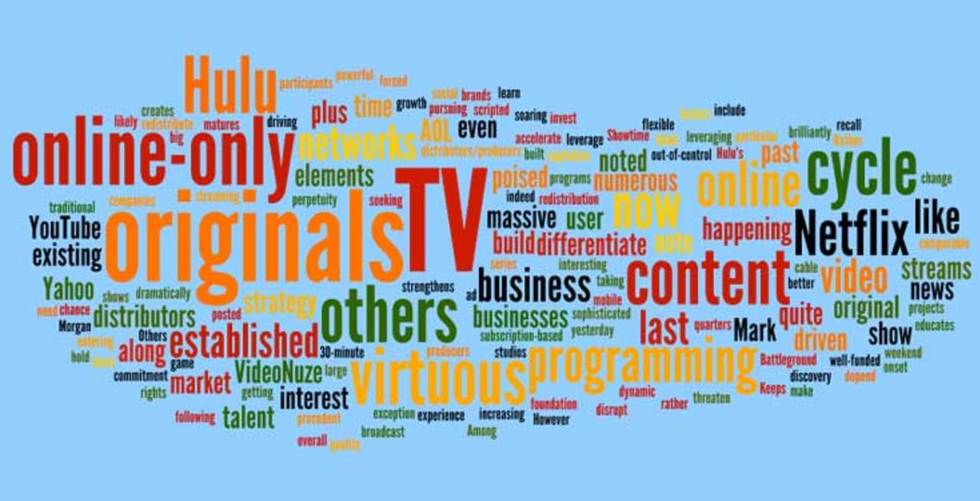 Editor’s Note: Will Richmond argues persuasively that the creation of original web series is now entering a transformative period. In 2012 a number of factors will come together and online originals will begin to compete with broadcast and cable TV. And take note, a lot of creative independent voices like Richard Linklater and Morgan Spurlock are leading the charge. We look forward to watching.

Just last week, in "Hollywood's A-Listers Embrace Online Video, Upending the Status Quo," I noted all the various factors that are contributing to top industry talent now pursuing online-only projects. But as I've had a chance to digest last week's CES announcements, plus Hulu's news yesterday that it too is planning an aggressive originals strategy in 2012, I think it's quite likely that online-only originals are entering a "virtuous cycle." Key elements for online-only originals' success are falling into place and are poised to build on each other, combining to dramatically accelerate the growth and acceptance of this emerging class of programming.

Those elements include: the increasing quality of the programming itself, driven by established talent; well-funded OTT distributors/producers like Netflix, YouTube, Yahoo, AOL, Hulu and others all with significant revenues and large audiences to promote to; a proliferation of connected and mobile devices that offer a user experience comparable to or better than traditional TV; robust subscription-based and ad-supported business models, the latter driven by brands' interest and sophisticated online video ad technologies; a foundation of massive online video viewership that continually educates users; well-developed discovery and social media tools to drive program launches and buzz; and finally, disillusionment with incumbent pay-TV pricing and packaging which creates interest in more economical, flexible alternatives.

It's important to note that all of these things are happening simultaneously, rather than just one or two attempting to be the locomotive, dragging along all of the others. That's the hallmark of a virtuous cycle: multiple streams of momentum feeding off of each other to make the overall velocity even greater. Virtuous cycles are powerful and quite rare. VideoNuze readers will recall that the last time I noted the onset of a virtuous cycle was for Netflix, as it accelerated its streaming efforts, in February 2010. The company went on to add nearly 13 million subscribers in the following 6 quarters, until its own poor decision-making put an end to its run.

I'll admit, it's risky to suggest a virtuous cycle in online-only originals, and to be sure none of this will happen overnight. Digital studios have come and gone over the past 5 years. However, there's solid precedent to point to. For Hulu and Netflix in particular, it's interesting to note that they're directly lifting a page from the playbook of premium cable TV networks like HBO, Showtime and Starz plus numerous basic networks that have pursued original programming. All of these networks first built their businesses by distributing others' content. But as they recognized the need to differentiate, they've each pushed heavily into original programming, leveraging their core redistribution business model. With their ratings soaring and numerous acclaimed shows to their credit, their originals strategy has worked brilliantly.

Others like YouTube, Yahoo, AOL, etc. who don't even necessarily redistribute established video content, have massive user bases and existing revenue streams to leverage. They're all trying to keep costs down and learn along the way what the winning formula is for online-only originals. Hulu is illustrative of this trend. Starting modestly in 2011 with Morgan Spurlock's A Day in the Life (renewed for 10 episodes in 2012), it is now upping its commitment with a 30-minute scripted series called Battleground and a travel show directed by Richard Linklater (The School of Rock). No doubt if these perform well Hulu will further invest in originals.

Over the weekend I found myself scratching my head reading (and re-reading), "The TV Business Keeps Getting Stronger," a blog post by Mark Cuban. Among his points are that the TV business is getting stronger because Netflix, Hulu and others are "customers of TV show producers," who are "driving up the price for content produced for TV." That has indeed been the case, as these distributors have sought - and continue to seek - brand-name programs on which to build their businesses.

But what Mark doesn't acknowledge is that the game is starting to change. Rather than depend, in perpetuity, on others' content, the online distributors are now seeking to create their own. As they succeed, inevitably, the relative value of established TV content will be reduced. The declining TV syndication market attests to that dynamic. The only exception in TV is live sports. But as I've written in the past, out-of-control broadcast rights, carriage fees and onerous multichannel bundling all threaten pay-TV's golden goose.

By definition, as a market matures, all participants are forced to differentiate. That's exactly what's now happening with the push into online-only originals. The good news for those financing these online productions is that a virtuous cycle is taking hold. As it strengthens, these companies are poised to capitalize on it big time and further disrupt the existing ecosystem.